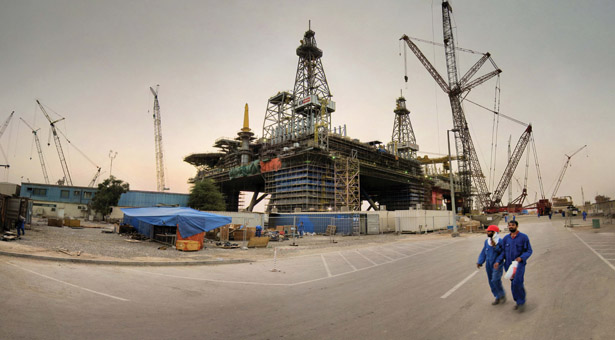 Many analysts predict China will surpass the US in most respects in decades to come, but energy security is one major exception. If current rates continue, Chinese oil consumption would more than double by 2030. Only the Middle East will be able to supply the vast quantities of oil that China is likely to need.

China’s reliance on Iranian oil is its largest security risk in the Middle East, and the hardest for China to shake. Despite Chinese efforts to limit Iranian oil and work with other partners in the region, an Iran-sparked crisis still threatens to cripple economic growth back home. Yet China – with a state-controlled energy sector and close ties to Iran – is still in a better position than much of the rest of the world to react to such a crisis.

One-fifth of the world’s oil supply passes through the Strait of Hormuz, a narrow body of water off the southern coast of Iran that connects the Persian Gulf to the Gulf of Oman, and ultimately the Indian Ocean. Iran poses the most significant risk to traffic in this strait. The Islamic theocracy has not veered from its plans to develop what it claims to be peaceful nuclear technology. To force Iran to the negotiating table, the US has instituted unilateral sanctions on Iran and is pushing for the UN Security Council to adopt multilateral sanctions on its oil exports.

“[Iran] will say, ‘If I cannot sell my oil, then nobody can,’” said Mamdouh Salameh, a London-based oil economist. The closure of the strait would cause a spike in global oil prices, potentially increasing oil prices from under US$120 dollars a barrel in mid-April to US$200-250, Salameh said. It would also greatly restrict China’s oil supply: Iran was China’s third largest oil supplier in 2011.

To reduce the fallout from potential sanctions, China cut its purchases of Iranian oil from roughly 600,000 barrels per day in October to 290,000 in February. China is also helping the UAE to build a pipeline that would bypass the Strait of Hormuz. The Abu Dhabi Crude Oil Pipeline is expected to carry 1.5-2 million barrels per day – equivalent nearly all the oil that the UAE currently produces – from the oil-rich west to the shores of the Gulf of Oman. China National Petroleum Corporation has been contracted to design and build the pipeline.

The pipeline has already been delayed from April 2011 to April this year and then to mid-2012, adding to short-term worries that Iran could close the strait. But at some point it might be useful in countering Iran’s economic threat. “Every couple of years it comes up, so at some point there’s going to be some concern about Hormuz when the pipeline is functional,” said Robin Mills, head of consulting at Manaar, a UAE-based oil supply chain management company.

Even with the pipeline, an Iran-sparked oil crisis would still have major consequences for China. But the rest of the world may feel the pain even more keenly. Since oil is a freely traded commodity, any drop in global supply would drive up prices for all countries.

China may be better positioned in a crisis than even the US, which imports no Iranian oil. Beijing could force the state-owned oil industry to take losses in order to preserve price stability. And if Iran planned a move, China may have advanced warning. “China will be very aware of what is really going on, better than any of us are because they’re involved in some of these international discussions and negotiations more than anyone else,” said Matt Parry, senior economist at the International Energy Agency.

But this remains a distant possibility. Most analysts think a closure of the strait unlikely. China or Russia, which also has close relations with Iran, would veto any resolution for UN sanctions on Iran, meaning the country would never have cause to close the strait.

Some argue that Iran’s own self interest is all the protection that China needs. “[Iran] would only try [to close the strait] in an extreme situation because obviously it means cutting off their own exports,” Mills of Manaar said. “The threat to Hormuz I think is relatively overblown.”