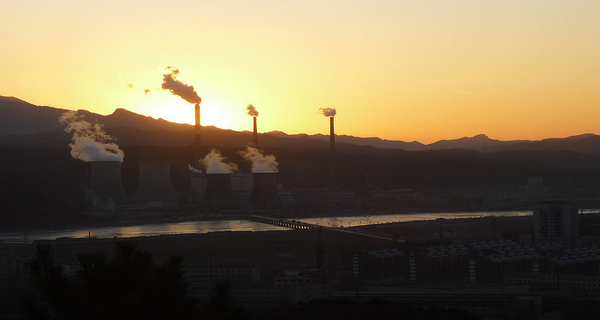 Despite its push for green energy, China remains a world-leader in coal investment.

The people of Xinjiang are no strangers to water shortages: their home region in China’s northwest has been known as the “land of fire” for centuries due to its arid climate. But recently, the province’s water resources have become even more stretched, with significant droughts and mounting fears for the long-term water security of the entire region.

Xinjiang’s cotton farmers, which provide over 60% of China’s cotton, are seeing their already scarce water sources being slowly drained away, leaving behind parched, polluted and useless land, according to Australian strategic research firm Future Directions International.

The water is being relocated for use at a coal-to-liquid (CTL) plant in Zhundong, one of many such facilities that China has revitalized since 2010.

While the world remains fixated on China’s green energy efforts, the country’s state-owned energy conglomerate, Shenhua, has been quietly investing huge amounts in Xinjiang to revive the CTL industry, which had fallen into decline due to financial and environmental difficulties.

In recent months, Shenhua has invested $42.3 billion into a CTL project in Xinjiang and another $7.9 billion in Ningxia, according to reports from Chinese state media. This makes China the world’s largest investor in coal conversion technology.

These enormous plants convert coal directly into synthetic transportation fuel. They were originally pushed by the China’s central government as a way to solve the country’s fuel shortages and decrease oil imports. The Ningxia plant alone can transform 20 million tonnes of coal into 4 million tonnes of oil product annually, according to China Daily.

But while growth in the CTL industry promises jobs and a secure supply of energy, its water-guzzling facilities are widely considered to be economically inefficient and environmentally unfriendly.

China’s recent investment in CTL technology raises important questions about the direction of the county’s energy policy and holds widespread economic, environmental and political implications. How does CTL fit into China’s broader energy strategy? Are the negative ecological impacts justified? Does CTL provide a possible solution to China’s growing energy demand? Here is what we know so far.

From a profitability standpoint, coal conversion technology is questionable at best. CTL production requires the central government to dish out enormous initial investment funds for a product that has minimal returns.

In fact, in order for CTL fuels to be competitive, the price of crude oil must be between $55 and 65 per barrel, according to research by Rand Corporation. In other words, with current oil prices, CTL companies are not economically sustainable.

While CTL projects presently generate marginal financial profit, a recent study by a group of Chinese academics showed that the quantity of net energy delivered to society is extremely low, due to high initial investment costs and low conversion efficiency.

However, CTL projects can help stimulate economic growth in underdeveloped localities and may provide opportunities for people who currently rely on subsistence farming to join China’s modern economy. The Ningxia base alone is expected to create 30,000 jobs and significantly increase net income in one of China’s poorest regions by 2020, according to china.org.cn.

China’s use of coal conversion technology has alarmed climate change activists who say it will further increase pollution levels and worsen global warming.

Not only does CTL production release large amounts of greenhouse gases into the atmosphere—approximately 0.8 tons of CO2 per barrel produced, Rand estimates—but it also contributes to water overuse and contamination.

Studies estimate that without carbon management the total-fuel-cycle of CTL is 2.0 to 2.2 times that of emissions created by the refining of conventional crude oils. The CTL process also uses 10 times more water than traditional fuel production methods, according to a 2010 study by the academic Erik Mielke.

The effects of such environmental degradation on the living conditions of those subsisting in the vicinity of CTL plants cannot be underestimated. For example, the water sustaining Ningxia’s 2,000-year-old rice paddies has been redirected for use by a Shenhua plant in Ningdong, taking away the livelihoods of hundreds of farmers, the Financial Times reported.

Developing an industry that increases water consumption by up to 500 million tons per year, according to academics at Portland State University, in one of China’s most arid regions is a dangerous proposition. Were China to experience severe water shortages in the Northwest or along the Yellow River, it could cause unrest, migration and an inevitable increase in food and grain imports.

The economic and environmental downfalls of CTL technology manifest themselves in ways that are politically detrimental to the Chinese Communist Party, even calling into question the legitimacy of China’s overall energy strategy.

Under President Xi, the Chinese government has placed a high priority on lowering levels of smog and promoting green energy. Recent investment in CTL, which is neither environmentally-friendly nor economically sustainable, constitutes a significant divergence from China’s other sustainability efforts.

Contradictory energy practices such as these undermine China’s green energy platform, causing the state to look fractured and indecisive. How China decides to balance its increasing demand for oil and its image as a green leader will have a significant impact on the legitimacy of the Chinese government, and the role it will play in future energy negotiations around the globe.

China’s use of CTL foreshadows an important decision the Chinese government will have to make: will China prioritize sustainable energy development or oil security? Only time will tell.