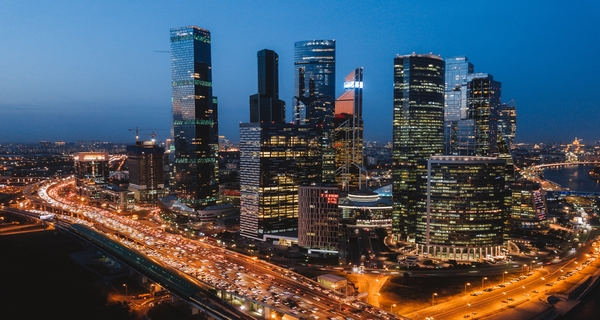 Moscow's freshly-built financial district has failed to fill many of its offices due to lack of foreign investment interest.

Alibaba’s march into Russia could be an inspired move

Chinese e-commerce giant Alibaba has dominated headlines in the tech world over the past fortnight following Jack Ma’s ceremonious departure as the company’s executive chairman. But the company also made a second, potentially historic move that same week that didn’t create quite the same splash in the media.

Last week, the Chinese firm signed a landmark deal with Mail.ru—one of Russia’s leading tech and media conglomerates that some have described as “the Russian Alibaba.” The two companies have agreed to form a joint venture named AliExpress Russia that aims to build a Chinese-style e-commerce ecosystem in the country of 144 million people.

Fittingly announced on the sidelines of the Eastern Economic Forum, an annual trade summit attended this year by Presidents Vladimir Putin and Xi Jinping, the agreement marks the arrival of Alibaba as a major player in Russia as the e-commerce giant looks to extend its reach across Asia.

The JV will give Alibaba access to Mail.ru’s 100 million-strong customer base across the former Soviet region and will help the company localize its operations in Russia. AliExpress and Tmall are already popular e-commerce platforms in Russia, but deliveries are shipped internationally from China.

One of Russia’s major telecoms providers, Megafon, will also be involved in the new entity in an as-yet unspecified capacity, as will the Russian Direct Investment Fund, Russia’s sovereign wealth fund. Megafon is selling its 10% stake in Mail.ru to Alibaba for $500 million, though the sum of its investment into the venture has not been disclosed.

Russia hopes that the creation of AliExpress Russia, which has an estimated valuation of up to $2 billion, will be a turning-point for the country’s digital economy and its reputation as a destination for foreign investment.

E-commerce penetration is currently at only 3%, compared to 15% in China, and Moscow sees the industry as a key driver of growth for an economy that is still struggling following the imposition of Western sanctions in 2014.

“We see this is as definitely, both for the Russian and the global technological market, a truly historic deal,” Mail.ru CEO Boris Dobrodeev told Russian business publication Kommersant.

For Alibaba, which will take a 48% stake in the JV, the deal marks a new stage in its bid to conquer the Russian market. These Russian ambitions are far from a recent whim.

AliExpress and Tmall have been delivering to Russian homes since 2015 and 2017, respectively. The former is a popular household brand name in Russia’s larger cities, although few are aware of the company’s Chinese management.

Alibaba has been looking for ways to increase its presence in Russia further for a while. It abandoned a potential deal with Russia’s largest retail bank, Sberbank, which would have allowed the company to leverage the bank’s vast customer database, last year.

The deal with Mail.ru could prove to be even more valuable given the Russian tech firm’s broad online-service provision. Like Alibaba, Mail.ru has cultivated an ecosystem that means most online activity in Russia can be traced back to one of its platforms.

The move into Russia fits Alibaba’s wider strategy of moving into underdeveloped consumer markets where the American e-commerce giants have yet to plant their flag.

Alibaba has invested more than $4 billion in Southeast Asian e-commerce group Lazada and other leading tech players in recent years. In June, the company posted that it had bought a stake in Turkey’s local leader Trendyol, while Amazon is still fumbling with the launch of a Turkish service. In India, Alibaba recently invested in digital payments platform Paytm, granting in exchange access to its cloud infrastructure.

Alibaba’s experience building China’s e-commerce market effectively from scratch makes it uniquely suited to entering these markets, according to Ashley Dudarenok, a Chinese digital marketing consultant who is herself a Russian national.

“They are aware that there is not much infrastructure in markets like India and Turkey, and they know exactly how to deal with this sort of aspirational consumer base,” says Dudarenok. “Along with countries in Southeast Asia, Russia is one such market.”

It may be still be poor by Western standards, but Russia has the largest population in Europe and an emerging middle class that offers significant growth potential. As elsewhere, Alibaba is planting its seeds early, ready to reap the rewards when the consumer market matures.

Alibaba has also received a warm reception in Russia, which has been undertaking a “pivot to Asia” strategy since the Crimean annexation. Increasing trade with Vietnam, India and China is designed to offset the losses from Europe, though these attempts have only been partially successful so far.

The timely arrival of Alibaba offers a stamp of legitimacy to Russia’s status as a developing economy with potential, rather than just the world’s gas station.

“As you know, Alibaba’s market cap is more than $420 billion,” said CEO Dobredeev. “So, a partnership with such a powerful player on the world stage is, of course, important and will help Russia achieve the breakthrough it plans in building its digital economy.”

In particular, the core technologies that Alibaba has developed back home in China will help propel the Russian e-commerce system towards world-class status.

“All the data Alibaba is going to use will be processed and stored on Russian soil, and the JV is going to use homegrown payment systems,” Dobrodeev added. “We will also be working with partners in the deal to build large centers for the development of AI and data processing in Russia.”

Russian suppliers will also hope to cash in as their goods are added to Alibaba’s delivery network that spans many fast-growing Asian economies.

“The Russian e-commerce market has huge potential. Furthermore, the partnership will open up to Russian producers opportunities to export to new markets,” said Alisher Usmanov, founder of USM, the operating company behind Megafon, in a recent interview.

The restless appetite for Russian producers to increase exports to China recently inspired the rolling-out of Dakaitaowa (a transliteration of 打开套娃, or “Open the Russian doll”), a state-backed initiative set up with the mission of promoting the “import of high-quality Russian food products,” such as beer, coffee, caviar, and honey. It also counts Mail.ru among its backers.

The agreement may have coincided with the loud noises of war games and grand reciprocal endorsements by the Chinese and Russian leadership, leading some to think this was just another excuse for the two countries to parade their deepening friendship. But geopolitics aside, in Mail.ru, Alibaba may just be on to a winner.