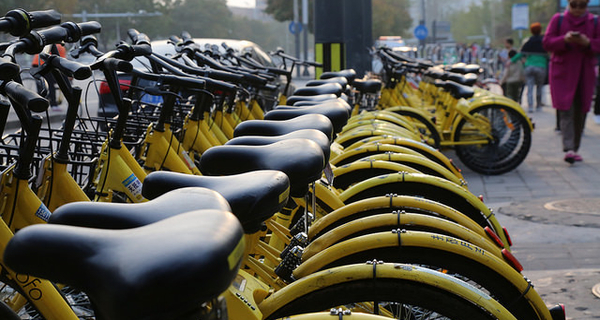 China’s bike rental industry has experienced a roller coaster over the past 3 years. At its height, there were nearly 80 bike rental startups in the market, brightening the streets with a rainbow of bikes.

But in the fast-paced tech world, trends come and go quickly. Within a year, over 20 bike startups failed, including once-big names in the field, such as Bluegogo,Coolqi, and Xiaoming. A cooling of the availability of capital, intense competition, uncertain profit models, a saturating market, and tightening regulation all contributed to swift market consolidation.

While the smaller companies were wiped out, prominent players such as Mobike and ofo came to dominate the streets and mindshare. The two bike rental giants together account for 90 percent of the market, according to research firm Cheetah Global Think Tank. For Mobike and ofo, however, this is just the beginning of another battle, only this time they are not only fighting their bike rental peers, but also with investors who once had their backs.

In 2017 alone, both schemes made it onto the top fundraising list in China: Mobike pocketed billion-dollar level funding and ofo secured $1.15 billion. But as the market prospects become clearer, investors who poured millions of dollars into the industry, have grown impatient. This change in investors’ mindset created a rift between investors, dividing those who want a quick exit either through a merger or acquisition, and the founding teams, who prefer independent development.

A merger between Mobike and ofo has been one of the most speculated possibilities for China’s bike rental market since the second half of 2017. Actually, investors from both companies have been pushing for a merger between the two, but founders from both of the companies stood firmly against the choice. Coupled with the complex investor relations, a merger was ruled out.

Investor sentiment change could be best illustrated in the changing attitudes of Zhu Xiaohu, ofo’s early-stage investor from GSR Ventures. In 2016, the out-spoken investor claimed that China’s bike rental war would end within three months with ofo coming out on top. As the market matured, he began to put pressure behind an ofo and Mobike merger in June last year and finally sold his ofo shares to Alibaba in January this year as the possibility of a merger fell through.

For both Mobike and ofo, their last largest funding injections were in July 2017. Both suffered from different degrees of cashflow strains resulting from a fierce subsidy war launched upon receiving their respective massive fundings.

Despite the cooling capital market, their dubious monetization model hasn’t proven sustainable. The original pay-by-per-ride approach proved to be difficult given the high maintenance costs resulting from high damage rates. What’s more, the fierce competition, fueled by capital inflow, established subsidy as a new normality in the industry, making it even harder for the companies to generate gains.

China’s largest O2O platform Meituan-Dianping announced its purchase of Mobike for $2.7 billion on April 4th. When commenting on the deal, many local media argued that it’s difficult for bike rental firm to seek independent development given the monetization model, and in-depth integration with existing tech powerhouses is their only way out.

Ofo under mounting pressure to pick a side

Facing a similar, but more complex situation stuck between Alibaba and Didi, ofo’s founder Dai Wei is more tenacious in maintaining the company’s independent status. In an internal speech given in May, the co-founder sought to rally the company by comparing its current status to Winston Churchill and wartime Britain. Ofo’s dark time would seem to refer to acquisition talks held with Didi at the end of April.

However, the bike rental titan seems to be coming under fire, with swirling negative publicity and rumors of their impending demise. In an article published on June 5th, local Chinese tech blog Huxiu cited many sources who disclosed that ofo would launch its largest-ever job cut, with up to 50% losing their jobs. Along with the cut, the sources said several top execs of the company including Nan Nan, SVP of public relations, have left their positions. Shortly after the post, thousands of posts featuring almost identical bearish views on ofo’s prospects appeared across China’s social media.

Ofo told TechNode that the rumors are totally false and the company is running perfectly normally. In response to the speculation, ofo also filed a lawsuit against relevant media, saying “No company has ever failed because of rumors!” in a WeChat post.

Sources in Singapore, however, tell TechNode that they’ve gone from 60 staff to less than half that. They did not specify over what time period the attrition occurred.

Ofo secured $866 million in March this year. While the funding came at a crucial time, the method of the fundraising underlines their cash constraints. Of the total, RMB 1.77 billion ($280 million) was secured from Alibaba by using ofo bikes as collateral, a rare case in the industry.

Given the difficulty in generating revenue from rides, the company has sped up its monetization by selling ads on bikes and apps. But the attempt hit roadblocks as several regional municipalities such as Shanghai have issued bans on putting commercial ads on bikes. In addition, the company has been slowing down their orders from bike makers and even cancelled its deposit-free policy in over 20 cities across the country.

Soured investor relations have also brought more drama. Through investment and embedding ofo’s service in its main app, Didi tightened its tie-up with ofo during the very early days of the hire bike battle. But as Didi has tried to get a bigger voice in ofo, cracks emerged between the two companies. Ofo’s supervisors assigned by Didi were removed shortly after they took positions last November. Didi then launched its own bike rental service in cooperation with Bluegogo, combining with its own manufactured rental bikes while owning about 30% of ofo.

To some extent, the latest bike rental drama reflects how difficult it is for startups to survive the heated proxy battles between Tencent and Alibaba in China.

Since the early days of the Mobike and ofo battle, each of the two companies was backed by a tech giant. Tencent has chosen Mobike as its largest investor. Meituan-Dianping’s acquisition only consolidated Mobike’s status as a Tencent ally since the tech giant is also an investor in Meituan.

Alibaba and its financial affiliate Ant Financial have picked ofo. However, ofo is not Alibaba’s only option. The e-commerce giant increasingly favors Hellobike, which landed RMB2.06 billion ($321 million) from Alibaba’s financial services arm Ant Financial on June 1 at a valuation to $2.3 billion,  on par with Mobike’s $2.7 billion. Ant Financial has joined almost every round of Hellobike’s fundraising spree since the beginning of this year.

“Independent development or being acquired, that’s a decision to be made under different situations. We are now more focused on improving user experience, cost control, and precise operation,” said a spokesperson from Hellobike in response to our inquiry about how the industry is developing.

“Dai Wei could have walked away with huge personal wealth. His persistence is rooted in the belief that the true value of shared bikes lies in itself as an easy and green method to change our transportation, rather than as a payment method or way of gathering data,” an ofo employee told TechNode.

“Entrepreneurs in China never can avoid the forces of local tech giants. Frankly speaking, independent development would bring huge possibilities as well as challenges for Mobike. But there’s nothing I can do now, investment institutions have their own judgments. Rules are rules. I hope people won’t regret making this decision,” Mobike CEO Davis Wang told local media after shareholders voted for the Meituan acquisition.

Wang resigned from his post shortly after the merger.