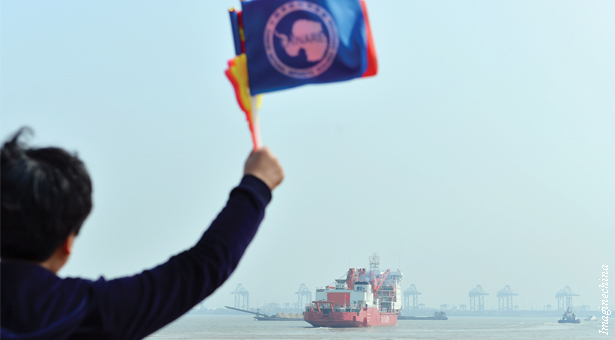 When the Arctic Council, a body of eight Arctic states, meets later this month in Iceland to discuss underwater fiber optics, China is sure to be in the room. The council granted China – located thousands of kilometers south of the North Pole – a permanent observer seat on the council last week, a status the country has long sought out.

The wide coverage of China’s grandiose-sounding ascendance to the council underplayed that it is essentially a toothless organization. The Arctic Council doesn’t make policy decisions on the region, nor does observer status allow China to vote on the body’s agenda. When it comes to resource deals in a region estimated to hold 30% of the world’s undiscovered gas, the council will have little sway in keeping players such as China out.

China’s footprint is already in the snow. The country has spent the last year wooing a few Arctic powers on resources deals.

Its dealings with Greenland, still technically part of Denmark, are a good example of how it has showed up without warning in the region. The Copenhagen Post last year reported that China would invest US$225.5 in airports and shipping infrastructure in Nuuk, the capital of Greenland. Officials on the EU Commission have also noted that China has people conducting feasibility studies for mining projects on the huge but mainly uninhabited piece of land.

China and Iceland signed a free-trade agreement last month, but China’s interest there go beyond trade. Damien Degeorges, a researcher at the University of Greenland, told CHINA ECONOMIC REVIEW late last year that the island-state “is seen by some as a future hub for Chinese shipping activity in the region.”

China’s trip through the Arctic Sea last year would support that suspicion. Last summer, Chinese icebreaking “Snow Dragon” sailed north from China, around Russia to an Icelandic port and back again. Other countries in the region that are more wary of China, such as Norway and Russia, watched carefully as the ship made its way through the icebergs.

With little other recourse for nations that are nervous about China’s activity in the region, the Arctic Council’s mantra might as well be ‘If you can’t beat them, have them join you.’ Although the council has little power to act, it can still play a role in fostering peaceful relations. The council is the primary forum for communication and cooperation on the preservation of the Arctic environment. If problems or abuses arise during China’s Arctic expeditions, the council will be the arena in which to engage the country.

Participation on the council will also fosters a much-needed understanding between interested nations like China and Arctic countries, said Lawson Brigham, a governor at the American Polar Society and a senior fellow at the Institute of the North in Anchorage, Alaska, in an interview with CHINA ECONOMIC REVIEW late last year that. India, Italy and South Korea ascended to observer status on the council at the same time as China.

“Having many key non-Arctic states in this forum will allow these nations to be closely abreast of Arctic developments,” Brigham said in an email. “Also, the non-Arctic states can participate in the working groups of the council on such subjects climate change, emergency response, protection of the Arctic marine environment, sustainability issues and more.”

Despite the urge to shut China out (something Norwegian officials reportedly threatened to do), coming face to face with China on environmental issues will be the most effective way of dealing with the country that – at least on its home turf – has shown little regard for the state of its natural environment.

China is in the Arctic, with or without welcome. Now it’s up to the Arctic Council’s member states to pressure the country to conform to environmentally friendly practices. Facing off with China in a meeting room should yield more peaceful results than a confrontation on the ice.