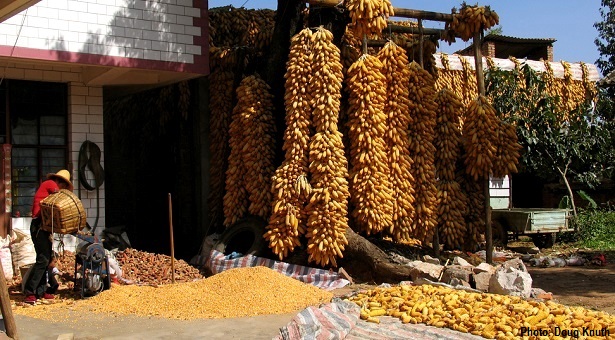 China's grain self-sufficiency policy lives on after its official demise

On paper and in pronouncements, the contentious policies that regulate China’s great waves of grain have undergone a sea change in the last two years. 2014 saw reports claiming China had axed its grain self-sufficiency requirements, and this year officials were said to signal a policy shift away from just bumper harvests to focus more on food safety and sustainability.

In practice, though, these policy bombshells have proved more bluster than boom.

Officials recognize that China’s grains sector is subject to policies that encourage overproduction, inefficiency, wasted stockpiles, elevated prices and, perversely, mounting imports of the same crops the country already has too much of as prices abroad fall. They also remain hamstrung by political tradition, fear of over-dependence on imports, systemic momentum and the often contradictory interests of the country’s rural and urban regions.

The result is regular tides of conflicting policy overtures, muddled further by jargon and arcane categories that obscure what “self-sufficiency” actually means. Despite loud calls for modernization, government insistence on continued supply without regard for demand could prove unsustainable.

“Chinese authorities are now acknowledging that eleven straight increases in grain production since 2004 came at high financial and environmental cost,” said Fred Gale, a senior economist at the US Department of Agriculture’s Economic Research Service. Gale said that because prices for rice, wheat and corn in China were much higher than international prices, import demand was strong despite large stockpiles of each grain.

There is one exception, though: Soybeans.

In keeping with a trend of rapidly rising annual imports after the global food crisis of 2007-8, China imported about 74 million tons of soybeans in 2014, according to USDA records. At roughly 84% of its total supply, the dominance of soybean imports is the result of tariff cuts made during the mid-90s when China was negotiating accession to the World Trade Organization, according to a report by the Institute for Agriculture and Trade Policy. The vast majority went to feed the country’s swelling swine stocks, which have ballooned in response to growing demand from the middle class for more meat.

That trend is expected to continue, and potential growth in feedgrain imports would dovetail nicely with the recommendations of last year’s Central Number One Document, an annual batch of policy guidelines released by China’s State Council. In 2014, the State Council called for grain production to stabilize at about 550 million tons by 2020, well below the previous year’s harvest of 602 million tons. It also told officials to pay more attention to food safety and quality.

In late March of this year, officials at the China Development Forum in Beijing echoed those sentiments. Deputy director Han Jun of China’s top rural policy decision-making body, the Office of Rural Work Leading Group, recognized the price distortions in the country’s domestic grain markets and pointed out that subsidies were nearing the limit China accepted when it joined the World Trade Organization in 2001.

Qian Keming, a senior economist at the Ministry of Agriculture, told the audience that 85% grain self-sufficiency in 2020 would be in line with the government’s grain security goals—an apparent 10% drop from the original target of 95% established in the mid-90s.

But when it came to grain production goals, Qian said, “we recommend still maintaining the present level, at roughly 610 million tons or so.” That would actually be an increase over the 2014 harvest of 607 million tons, which alone should bring the demise of China’s grain security policy into question. The percentage he gave for grain sufficiency in 2020 also warrants more scrutiny, and Qian’s phrasing in its original Mandarin Chinese is key to understanding that figure’s implications: “grain security” (粮食安全 liángshí ānquán) applies to a category which, from its inception, included all varieties of grain. And then some.

Hu Ruifa, a former member of the Center of Chinese Agriculture Policy now at the Beijing Institute of Technology, said that China’s original grain security goals didn’t take the role of feed grains into consideration. Hu said the government had since shifted to an emphasis on “edible grain security” (口粮安全 kǒuliáng ānquán), including rice, wheat and corn but excluding soybeans.

That means Qian’s self-sufficiency figure of 85% for 2020, deployed in the context of more general “grain security”,  matters insofar as it departs from the current level of grain self-sufficiency. That takes everything the Chinese government considers “grains” into account, including soybeans (and even potatoes).

By this yardstick China’s self-sufficiency rate in 2014 was only 87.9%, theoretically limiting grain import growth to just 2.9% between now and 2020. And based on Qian’s 720 million ton estimate for demand in 2020, imports in that year would account for only about 108 million tons of China’s total annual grain supply, up around 35 million tons from imports in 2014.

That is no small amount, but it does not signal an end to grain self-sufficiency. Because price floors for rice and grain are more formalized and statutory than that for corn, import gains are more likely to come from the latter. But don’t expect corn to follow suit with the fast and loose soybean sector.

“The thinking on corn by Chinese officials has loosened up,” said Gale at the USDA. “There is an increasingly prevalent view that some corn could be imported, if necessary, because it is used as animal feed, not staple food. However, imported corn will only be permitted to play a supplementary role to domestic corn. Chinese officials are on guard against corn or any other sub-sector becoming dominated by imports and foreign companies, as has happened with soybeans.”

Self-sufficiency may remain holy writ for the mainland’s grains, but that doesn’t rule out reform altogether. While it allows for only a minor role in China’s food supply for imports, the 2015 edition of the Central Number One Document also outlines ambitious plans to restructure the farming sector by fostering the growth of large-scale agribusiness on par with that seen in the US.

That drive will be challenged by limitations on land rights over agricultural land in the countryside that farmers only own the working rights to. William Niebur, vice president for hybrid seed producer DuPont Pioneer
North Asia, said land reform would prove fundamental to the creation of larger farms in China. It just won’t happen all at once.

“[L]and reform will progress at a differential rate in Northeast and Northwest or the Central River Valleys,” Niebur said. “It’s going to move province by province and within the provinces in a unique and different way.”

That reform will accommodate the additional pressure to urbanize, resulting in an outflow from the countryside that will shrink the available labor supply, he said, driving mechanization and higher technology utilization. It wouldn’t be the first such tectonic shift for agriculture since Niebur first visited China.

“I can remember traveling here in the 90’s as a research leader for Pioneer and was amazed at just how poor the road systems were, and how loosely connected rural environments were to urban environments,” Niebur said. That soon changed as the leadership pushed forward infrastructure improvements to rural-urban connectivity and productivity upgrades accomplished through hybridizing crops, increased fertilization and rudimentary tillage.

Reforms from 2004-2006 saw a gradual end to China’s agricultural tax and the introduction of some subsidies for mechanization, which Niebur said let farmers know they would no longer be subject to a heavier tax burden than urban residents. The subsequent introduction of price floors for key crops – rice, wheat and corn – helped make farming them an attractive enough prospect that production soared, even as prices have become seriously distorted in recent years.

Niebur said that the current price disparity was a problem—one he expected would be dealt with. “At least in my thirty years in working in agriculture, everything that I have seen that has been unsustainable eventually stopped and it stopped by design, or it stopped by necessity.”

Change is coming to China’s agricultural sector. Where exactly the farmers who have become dependent on subsidized grain prices ultimately fit into the mechanized, mass-farming future envisioned by policymakers isn’t entirely clear. But the central government’s urbanization policy clearly indicates that authorities want rural residents to move to the nation’s cities.

Once there, demand for rice and wheat are expected to shrink as meat consumption will continue to drive feedgrain production up. That could in turn make feedgrains a national security priority as corn and soybean-fed pigs, chicken and cattle become growing staples of the typical mainland Chinese diet.

Such demand could conceivably force China to open up to an increase in imports, particularly for corn. But so long as self-sufficiency predominates in agricultural policymakers’ minds, any grain imports will only ever supplement a mostly home-grown supply. ♦