Home Business Airborne: Can China get its commercial jets into the sky? 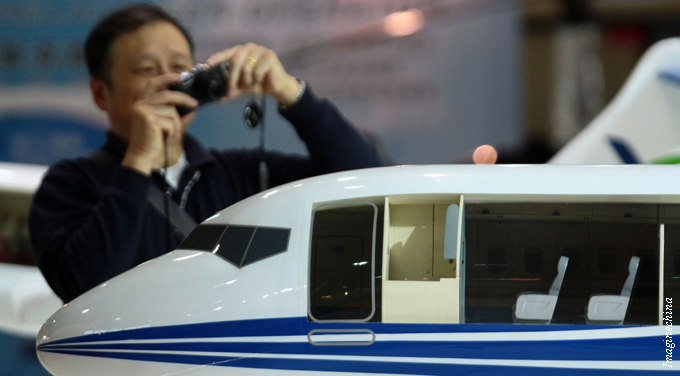 Airborne: Can China get its commercial jets into the sky?

China has marked out a rough date next year when its homegrown jet, the ARJ21, will lift off a runway with a cabin full of passengers, likely headed toward a nearby city.

But the company building the plane, Commercial Aircraft Corporation of China, or Comac, has much work to do if it plans to launch commercial service by that time.

After several failed attempts to get China’s commercial aerospace industry off the ground, the company is essentially seeking to rapidly build a global brand, with everything that comes along with that: Supply chains, marketing, and maintenance and repair teams to operate around the globe. It also hopes to compete with international heavyweights Boeing and Airbus globally as well as in the expanding domestic market.

The foundations have come together since the company was formed over four years ago. The state-owned firm already has 400 orders for the ARJ21 regional liner and the bigger C919. A Chinese firm added 20 to the list just last week for the latter.

Ironically, certification for the ARJ21 has been delayed longer that the company itself has existed. And getting approval to fly the jet could be just the beginning of Comac’s struggle on the world stage.

Comac’s history is entangled in the complicated development of the Chinese aviation sector. The firm was fathered by the domestic defense machine in 2008 as yet another attempt to commercialize an industry long dominated by military manufacturing.

Its predecessor had a troubled launch. A company called AVIC Shanghai, founded in the 1950s, unsuccessfully sought to produce commercially viable aircraft with US partner McDonald Douglas. Another company, AVIC Commercial Aircraft Corporation, or ACAC, started work on the ARJ21 – the one Comac is trying to finalize today – in 2002 with sights on a commercial launch in 2006.

That never happened. ACAC was merged to form Comac and, more than a decade after its engineers began working on the twin-engine jet, the project is still inching forward.

There’s good reason for Comac to roll out an aircraft that can fly as soon as possible. China has one of the fastest growing markets for commercial aircraft and that growth is expected to continue for the next 20 years. Boeing projects that by 2032, Chinese airlines will have added close to 6,000 more aircraft to their fleets at a cost of US$780 billion. That’s 40% of the planes that will be ordered in the Asia Pacific region during that timeframe.

The longer it takes for Comac to get its planes in the air, the more of those orders it stands lose to Boeing and Airbus.

Perhaps the biggest challenge for the company will be getting the US Federal Aviation Administration (FAA) to certify the ARJ21. As Todd Siena, founding partner of Shanghai-based aerospace consultancy Avia-Tek, pointed out, the key to Comac entering the global market is FAA certification of transport aircrafts from China, a class that includes the ARJ21.

The FAA is currently shadowing the Central Aviation Administration of China (CAAC), as it tests the ARJ21 for certification. If CAAC’s findings match those of the FAA’s, transport-class jets could be incorporated into a bilateral agreement between the two countries. That would at least open the door to the international market for the company as many countries take the FAA certification as an overall stamp of approval.

Of course, a green light from the FAA won’t guarantee acceptance in the US, Siena noted. The final decision rests with Congress and could run into political obstacles the likes of which other Chinese companies with supposed military ties, such as Huawei Technologies, have encountered recently.

This round of certification, with the US standing over its shoulder, is likely a learning experience for CAAC on how to get the procedure done. The process is not just about having the ARJ21 certified; it also includes extending the bilateral agreement to include civilian jets in the future.

“The outcome of the shadow certification on the ARJ21 is critical for the future salability of the C919 and future models,” Siena said. “But do not be surprised if the Chinese hedge their bets by initiating a similar process with the European Aviation Safety Agency.”

China hopes the C919 to take on the larger jets on the market, such as the Boeing 737 and the Airbus A320. Planned entry into service for the aircraft is 2017, however that date could be pushed back.

Marketability hasn’t always been a top priority for China’s defense manufacturers. Many of Comac’s employees have a background in the defense sector and the process for certifying military planes is much different from those used in civil aviation. All these factors pose a large challenge to the foray into commercial flight.

Securing orders from China’s state-owned airlines is the first stop, and is expected to be less arduous. The relations between companies, which were all at one time housed under the same regulator, should be strong enough to secure sales. Government economic planners that have a track record in forging business contracts between state firms across different sectors could even mandate it.

Comac will undoubtedly have more difficulty selling to international airlines, especially those in developed markets where the Chinese military lacks connections.

“Since there is no historical link between defense establishments in China with non-Chinese companies, this could be a barrier,” said Morris Cohen, a professor of manufacturing and logistics at University of Pennsylvania’s Wharton School.

A lack of contacts at global airlines might just be the beginning of Comac’s marketing woes outside of China.

Promoting multimillion-dollar jets is a delicate craft that requires expert knowledge on each piece of machinery contained within. It’s a knack that can take years to develop but is essential to selling planes to major airlines around the world. The company must also prove that it can be responsive to the often demanding requirements of its customers.

“In this industry, you need to provide excellent service to international companies or else no one will buy your aircraft,” said Jennifer Li, director at the Shanghai office of consultants AlixPartners.