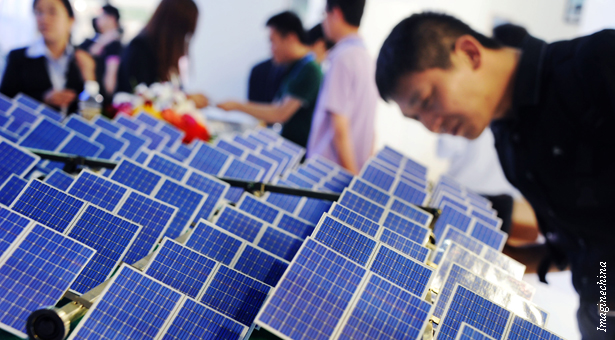 How’s this for counterintuitive: The EU launched an 11.8% tariff on Chinese solar products on Tuesday, and Trina Solar’s (TSL.NYSE, TR3.FRA) share price climbs 2.2%. Others also remained relatively unscathed. Yingli Green Energy (YGE.NYSE, YG11.FRA) saw a similar rise but Suntech Power Holdings (STP.NYSE, S9H.FRA) fell 1.9% that day. Perhaps the reaction was muted because the duties were softened from the original threat of up to 67% tariffs. Now they’re set to gradually ramp up to only 46% within two month if no further deals are struck between China and the EU. Given the level of exposure to the European market, the three-fold jump in the tariff by August will certainly hurt Chinese companies. This is bad news for an industry already in the doldrums, tariffs or no tariffs. There are signs, however, that the market is starting to recover from a glut that brought prices crashing down last year, said Lu Yeung, an analyst at UBS Investment Research. Solar makers in other countries are slowing production of solar cells, and China has been shutting down capacity, early indications that the worst of the oversupply in the industry may be over, he said. Lu said he couldn’t comment on which companies might recover first. Investors should watch for progress in the EU. Experts have told China Economic Review that opposition from EU member states will hold back more severe measures. If all stays calm on the political front, now could be the time to buy these companies on the cheap.

It’s on the internet, it has to be true

Sohu.com (SOHU.NASDAQ, XOU.FRA), ever the subject of speculation, has found its shares again subject to traders’ guesswork. The stock rose nearly 25% in May with the expectation that it would buy another video streaming site. The logic is clear: Baidu.com (BIDU.NASDAQ, B1C.FRA) surpassed Sohu’s share of the video streaming market overnight when it bought PPStream’s video unit. Sohu simply has to buy a second-tier video site “otherwise it will be hard for them to survive” in the streaming business, said Mike Chen, an analyst at China Merchants Securities in Shenzhen. But since May 31, shares have sank 3.6% as a deal has yet to materialize, and some wondered whether the speculation was excessive. Even if it does acquire another online video company, Sohu will have an uphill battle to fight as the company would likely still remain in third place, said Chen, who has a neutral rating on the firm. Unfortunately for investors, the other two leading video sites aren’t much more appealing. Baidu is losing market share in internet search to Qihoo and video leader Youku Tudou (YOKU.NYSE) lost market share after the Baidu-PPStream deal. As the firms battle for market share, this is one fight investors may wish to sit out.

Exporters like toy and shoemakers haven’t been the only companies caught off guard in the throes of China’s rebalancing process. As global demand wanes, the paper makers who produce the boxes that hold China’s exports when they’re shipped are also facing a slowdown, as well as pressure to reorient domestically. Nine Dragons Paper Holding (2689.HKG) and Lee & Man Paper (2314.HKG), China’s two biggest producers of paper packaging, have faced falling demand since 2011. “There’s definitely been a structural change in the economy, and that’s taken time to work through,” said Zac Gill, an analyst at CLSA Asia-Pacific who covers China’s paper industry. “It used to be that these paper companies were selling directly to exporters, or indirectly to manufacturers who were shipping things abroad.” Paper firms now must rely on domestic demand more for growth, he said. The outlook for the companies should improve as long as China’s GDP growth matches expectations this year, according to a report from Citi Research. Several other factors will play into market performance too. Gill noted that the companies have reduced the weight of paper boxes, which cuts shipping costs. But this can appear as if they are selling less. The companies will also have more difficulty hawking their wares as they grow more expensive with the appreciation of the renminbi, as well as higher costs to buy used paper from overseas for recycling, Citi said. CLSA is bullish on Lee & Man but sees Nine Dragons underperforming the market. Citi downgraded its outlook on both companies but said conditions could improve this year.

Three IPOs in Hong Kong have fallen out of the gate, and companies looking to list may once again start getting cold feet. Mondo China Holdings, an auto parts maker, halted its listing that was scheduled to hit the market last Friday. Wuzhou International Holdings (1369.HKG), a company based in Jiangsu province’s Wuxi that builds and manages malls, could have some legs as most of its projects are in lower-tier cities where there’s the most room for growth. China Harmony Auto (3836.HKG), an auto dealership group in Henan province, looks less promising as the company deals in foreign luxury cars, which may suffer under Xi Jinping’s crackdown. The company also appears overvalued. With Wuzhou raising up to US$220 million and China Harmony pulling in up to US$309 million, these IPOs are large enough to be a good barometer of sentiment – if they choose to proceed with listing, that is.