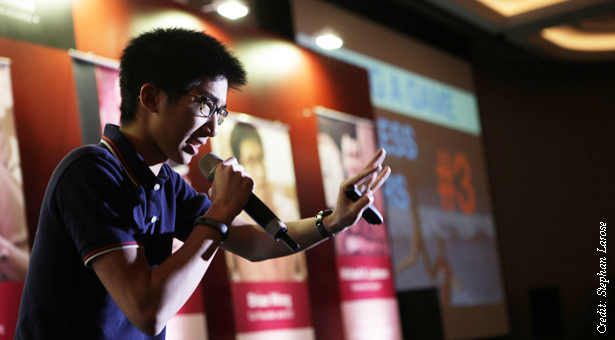 Warning: Brian Wong is marketing your “moments.” That’s what the 21-year-old Chinese-Canadian entrepreneur calls serendipitous online achievements. Wong’s advertising platform, Kiip, gives users rewards when they complete simple actions on their computers or smartphones. Finish a shopping list on your iPhone and Kiip might give you a coupon for a soft drink. Beat a level in a computer game and get a bag of Skittles candy. While users are racking up rewards, Wong is selling these moments of completion to companies, such as Pepsi. The users get rewards and the companies pay to pop up on screens to present the award.

The app has drawn valuable attention. As 2012 drew to a close, Kiip tallied US$15 million in venture capital from some of the biggest names in the IT business. His company has offices around the world, from San Francisco to London to Hong Kong, and partnerships with more than 40 major brands such as Best Buy, Playboy and Disney.

Wong, from Vancouver, Canada, spoke with CHINA ECONOMIC REVIEW on April 12 on the sidelines of Transition China, an entrepreneurial forum in Shanghai. Although smartphone users in Japan and in some Southeast Asian countries can download Kiip to their phones, the startup has not entered the Chinese market. Wong is nevertheless keeping a close watch of the rapidly developing mainland advertising market, where he says online ad platforms are still rudimentary.

But with Chinese companies such as Tencent and Sina are becoming powerhouses of IT innovation, it seems only a matter of time until China’s advertising capacity can support firms like Kiip.

What kind of presence does Kiip have in China?

We have a small sales office in Tokyo. We’ve started doing campaigns with Mitsubishi … We also launched a campaign with Lawson’s last month where the reward was their fried chicken product. It was awesome. It was one off the coolest campaigns we’ve ever ran. It was great because Japanese people are usually much more in tune with what their phones are capable of doing. It’s a cultural thing; they were the first country to have 3G. That’s the reason why they are so far ahead of anyone else. That’s why we chose to start [our Asia launch] in Japan.

So no presence in China yet?

No not yet. We’ve done some campaigns in Southeast Asia with Colgate and an agency out here called MEC. We’re starting to figure out what we could do more. China is very unique, it’s definitely it’s own world.

Given the rapid increase in mobile usage in China, it seems like a place you’d want to be.

I do want to make sure we tap into that dynamic.

What is your outlook on China’s mobile internet market?

The internet penetration here is something like 40%. Here’s my prediction: Some of that internet penetration is going to be taken up by 4G broadband access. The first device people in developing cities are going to buy is a tablet; I think that’s going to make huge implications in mobile growth. That’s what you’re seeing in Indonesia. Their first internet enabled device is not a PC, it’s a smartphone.

What do you know about advertising on the mainland?

There’s a lot of money locked into TV. I know there’s a lot of potential in mobile, but it hasn’t been figured out yet. A lot of ad networks in China have failed. They aren’t exactly the most prevalent way for advertising to be bought and sold.

What are you seeing as far as innovation in advertising goes in mainland China?

Rovio did a promotion with McDonalds where you could get some kind of reward when you play Angry Birds near a McDonald’s. That was pretty innovative. In general, let’s face it, the amount of innovation perse in the advertising industry in China is very nascent, in its early stages still. Mobile is a unique thing that’s growing. You have brands that are trying to figure out what they want to do there. I think if you want to see somewhere where this kind of innovation can go, look at Japan and Korea. Where you have a much more evolved set of chat apps. WeChat is very early in its evolution. [In Korea] you have Line, WhatsApp and Kakaotalk. Line has its stickers you can buy. That’s an interesting revenue and advertising model. Stuff like that. The buy model [of advertising] is still stuck in the dark ages. You have these portal sites that still charge on a cost-per-day basis. We live in 2013. That’s like a newspaper model. It’s very archaic the way that they are buying and selling digital advertising.

There’s talk of Tencent moving into e-commerce on the WeChat platform. From an advertising perspective, what is the most effective way to tie that into the platform?

Any time you tie direct commerce, m-commerce, to any type of social interaction product that has a massive adoption, you have many different possibilities. Here’s an interesting corollary: Look at GroupMe in the States, [which] now recently added a “split-the-bill” type of functionality. You can pay back your buddies in a chat. But it’s very smart. Here’s an example, I was in Vegas a few weeks ago and a lot of people in the group owed me money after a few nights. And using GroupMe you can split the bill. It takes into account the socializing and the purchasing that happens from the socializing. WeChat bringing into the fray m-commerce and digital goods selling could be very interesting considering the massive adoption, the 200 million plus downloads. That’s enough of an adoption that if you adopt a mobile payment solution, and only 10% use it, that’s 20 million users. That’s way more traction than any mobile payments service has had.

What’s the next step for Kiip?

More vertical expansion. We started with games, then we went to fitness and health, then later productivity and utility. Next, music, travel, financial services – like hitting your savings goal. Exponential growth comes from international [business]. That’s why we set up basic infrastructure in Tokyo and London. The next parts of our growth are wildcard products we like to create. We have an innovative product team based in San Francisco. We have a top secret product that we are going to be releasing later this year that’s going to be pretty awesome. If I can figure out how to continue to out-innovate ourselves – that’s one of the things I want to keep happening.