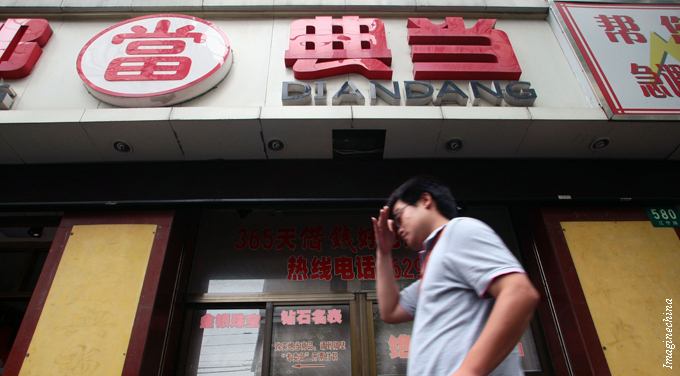 China’s tight credit environment has fostered some interesting financial innovation. In some cities, stacks of wool can be traded for an apartment. Amid this desperate demand for capital even pawnshops, a traditional lending channel, are changing how they operate.

Labelled as capitalist “bloodsuckers” by the Communist Party, pawnshops were banned in China from 1956 to 1987. Upon their return they were mostly frequented by people struggling to make ends meet who would pawn a family heirloom or other household item for a quick loan. In the past decade their role has expanded to provide capital to hard-pressed small businesses.

Pawnshops are now firmly part of China’s shadow banking industry. This is the murky world in which banks and other financial institutions come up with evermore creative ways of packaging loans and other forms of credit to companies. A report just released by the Chinese Academy of Social Sciences, a top state-backed think tank, puts the value of this industry at US$4.4 trillion – the equivalent to nearly one-fifth of the domestic banking sector’s total assets.

That huge figure is the result of the difficulties small businesses face in raising money from banks. There are more than 11 million SMEs in China that employ over 85% of the national workforce. Yet almost two-thirds can’t get access to bank loans, according to a survey by the Development Research Center under the State Council last year. State-backed banks prefer to lend to large firms and enterprises affiliated to local governments.

In such an environment SMEs often turn to family financing, underground banks and loan sharks to fund their operations. They are forced to pay eye-watering interest rates well into double-digits. By contrast, the average rate at a retail pawnshop is usually much lower.

Step inside the retail unit of an upscale pawnbroker like Shanghai Hualian Pawn or Beijing’s Huaxia Pawnshop today and you’ll see the usual assortment of watches and jewellery that were common 20 years ago. But peer into an office behind the counter and you might well overhear negotiations for a loan in exchange for the keys to a luxury car or apartment deed. The average loan at a Chinese pawnbroker is about US$16,000 (RMB 100,000) versus US$150 in the US.

The industry is small compared to other shadow banking channels, but growing. China had 6,833 pawnshops at the end of September 2013 with a loan balance of US$11.83 billion, according to the Hong Kong Trade Development Council, citing statistics from the Ministry of Commerce. Industry revenue rose 5.1% year-on-year in 2013 while profits climbed 3.6%, according to state media reports. But with policymakers keeping a close grip on credit growth and mounting scrutiny of informal lending rising, pawnshops could see a jump in demand for their lending services from business owners finding it harder to get cash.

As this begins to happen it might push up the cost of borrowing. Interest rates at some pawnbrokers can already go as high as 35% for a six month loan. That could attract more investors to the market. Pawnshops are funded by a combination of bank loans, trust companies, individual investors, private firms and SOEs, and – illegally – by individual depositors. Yet this murky market also comes with inevitable risks. In January, a pawnbroker and former official in Hainan province was arrested for defrauding investors of some US$132.24 million.

For now pawnbrokers remain a small part of the credit system. There are opportunities to grow but those are limited by the fact that in order for borrowers to get a loan they need to have something to trade in. Many struggling firms pledged the family silver a long time ago.

A bigger role for pawnbrokers could be to serve as a canary in the coal mine to flag incoming risks in the shadow banking sector. The short-term duration of the majority of pawn shop loans may provide some early warning signals of which high-risk borrowers can’t repay their debts.