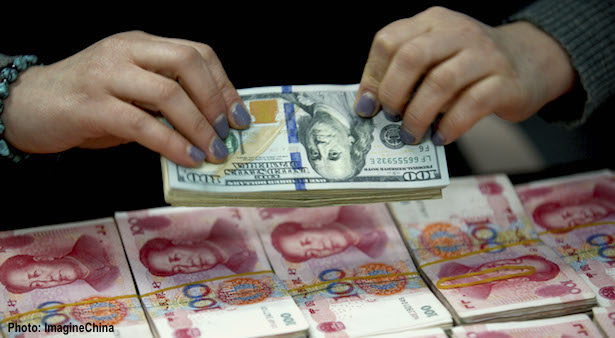 The size of the yuan’s initial drop this week seems to have overshadowed its cause, perhaps understandably: The currency’s trading-band fall of nearly 2% against the US dollar on Tuesday hit many unsuspecting investors, analysts and journalists square on the jaw like a hard left hook.

But heading into the third day of the new and largely unproven currency regime that made the drop possible, it is worth scrutinizing what exactly the new scheme entails and why the old one was dropped, as well as the implications for systemic risk in China as it embarks on what could prove to be a significant step in a long-promised campaign of financial reform.

On the mainland and increasingly abroad, everything from gold to property to equities to cabbage is bought with the yuan. Put simply, there is no nexus so central to China as its currency. And now the central bank has cranked the coin of the realm’s volatility up to unprecedented levels.

Thus far, the People’s Bank of China (PBOC) has played by the new foreign exchange rules it laid out Tuesday morning: Previously the central bank would, without regard for market sentiment, set a midpoint for the yuan’s dollar exchange rate from which the currency could float up or down by a maximum of 2%. The new mechanism has the PBOC still setting the midpoint, but is supposedly based on the market movements of the previous day.

That has remained technically true, though on late Wednesday afternoon news broke that the PBOC had ordered state-owned banks to sell dollars in the last 15 minutes of trading. Thus, after nearing its bottom limit of 2% devaluation, the yuan’s dollar value swooped back up by about 1% to set a less drastic midpoint for the start of Thursday trading.

Chen Long, China economist at research firm Gavekal Dragonomics, said he suspected this policy combination could continue: The bank can allow the yuan’s fixing price to follow from the spot market closing price, protecting its credibility; but it can also intervene in the spot market as needed to prevent the currency from falling by 2% every day.

The new foreign exchange regime – assuming it holds through the rest of this week – could be the most substantial move so far under President Xi Jinping’s administration to follow through on promises to give the market a greater role in China’s economy. Just not too great.

“It appears that in the first two days of this [scheme] that what they’re trying to do is let the market play a greater role in determining the exchange rate, but not let it play too big a role,” said Christopher Balding, associate professor at the HSBC School of Business at Peking University.

Balding suggested the downward pressure on the yuan’s value was largely a happy coincidence, and was skeptical that any resulting impact on China’s exports could be extricated from regular business cycle changes.

Speaking shortly before the PBOC intervened in the spot market, he said the bank would likely move to halt downward movement it considered too sudden. “My sense is they’re content to let the RMB glide down a little bit,” Balding said. If that means increased capital outflows from China’s financial sector, so be it. Balding also suggested keeping an eye trained on interest rates: “If maintaining the [exchange rate] peg is less of an issue, that does give the PBOC the freedom to lower interest rates and potentially help out Chinese businesses.”

There could be enormous strain on public and private actors with dollar-denominated debt such as property developers and some local governments, but Balding said that this was unlikely to influence the central bank’s decision making, due to its relatively small portion of total debt.

That is not to say China’s financial system is heading into the new exchange regime risk-free. While Beijing’s crackdown on short-selling and other bullish activity in the mainland stock market has ratcheted down volatility in recent weeks, other, larger systemic issues have remained largely unaddressed.

The World Bank outlined many of these in June in a special section of its latest China Economic Update titled “Reform Priorities in China’s Financial Sector”. The critical section got a good deal of press, then was taken offline; the update was later reposted without it. The bank claimed the section hadn’t been properly reviewed before being published—despite having been based on a previous report the bank had co-authored with the State Council’s Development Research Center, according to a footnote from the original report .

Vetted or not, the section contains a trenchant breakdown of systemic dysfunction, the presence of which has become more glaring in recent years as transition away from export dependency got underway. In it, the bank calls for substantial revision to the state’s three roles in China’s finance sector: Promoter, owner, and regulator.

In condensed form: The section’s authors argue that the regulatory role of the government has long been subordinated to its role as promoter of economic growth, resulting in a credit-dependent economy that does a sloppy job of distributing credit where it is needed—per its own demands in its role as owner of finance-related companies.

That ownership, which extends beyond state-owned enterprises to the private companies the government can effectively control, is hard to overstate. The World Bank’s estimates in the deleted section, based on data from 2012, indicate that the state effectively owns 94.5% of bank assets, 79.8% of the insurance sector’s premiums, 88.1% of trust assets and 79.9% of security companies’ total assets. The bank thus calls for a smaller state ownership role—though not for the government to completely relinquish control.

The analysis is not solely critical: The bank commends the establishment of a deposit insurance system in May of this year, as well as regulatory and legal reforms to the shadow banking system to close loopholes and create a more level playing field with other nonbank financial institutions, like trusts and insurers.

But in addition to a smaller ownership role, the bank also calls on the state to implement interest rate liberalization that would allow the market to determine the interest gained by China’s consumers on their bank deposits. Part and parcel to this central plank of reform, according to the bank’s analysis, are supportive monetary and exchange-rate policies.

Whatever its intentions, the PBOC’s actions have garnered cautious praise from t
he one international institution whose approval Beijing may desire more than any other: The International Monetary Fund. The fund called the new foreign exchange mechanism “a welcome step as it should allow market forces to have a greater role in determining the exchange rate.”

That is important because The IMF can grant China the financial prestige so clearly desired by the current administration, specifically in the form of the yuan’s inclusion in the basket of currencies granted “special drawing rights” (SDR). That would confer the status of a global reserve currency on the yuan.

“The symbolic value is huge,” said Chen at Gavekal. “They’ll have made the RMB one of the five most important currencies in the world.”

Just about a week ago the IMF suggested that the yuan still had a ways to go before it could be included in the SDR currency basket. Eswar Prasad, former country head for the fund in China, told The Financial Times the report indicated “that the decision about the renminbi’s inclusion in the basket hinges on financial market development, further opening of the capital account, and greater exchange rate flexibility.”

But as with any fall in the value of the yuan, this week’s sparked outcry from American politicians claiming currency manipulation, despite even the IMF assertion earlier this year that the currency was actually no longer undervalued.

New York Senator Chuck Schumer – who has previously called on the IMF to ban China from inclusion in the SDR basket – told The New York Times that for years, “China has rigged the rules and played games with its currency, leaving American workers out to dry. Rather than changing their ways, the Chinese government seems to be doubling down.”

Populist politics aside, much of the blame for misperceptions about the causes of Tuesday’s fall and the new exchange regime lies with the PBOC itself, which claimed on Tuesday that the 1.9% devaluation which had occurred under the new setup was a “one-time correction to close the gap between the reference rate and the market rate”.

When Wednesday morning’s mid-point actually reflected Tuesday’s closing rate and overnight shifts in foreign exchange markets, the bank was simply following through on a promise to implement its new rules rather than engaging in purposeful devaluation. Based on its intervention late Wednesday, the central bank may not have expected another such tumble after Tuesday’s initial fall.

In practice, though, the new scheme has – last least in its first two days – been followed to the letter of the central bank’s law. Balding suggested that this may have been prompted in part by China’s growing capital account deficit, though he was careful to add that “I don’t think that’s going to cause a payments crisis.” Chen, at Gavekal Dragonomics, said the motivations for the change could be numerous, but suggested the most direct issue was SDR inclusion. But beyond symbolic value, he said the status’s practical benefit to China was “not that much, to be honest.”

For now, at least, everything remains up in the air: Dangerous and demanding all attention, like cutlery just thrust skyward. The PBOC sets the yuan’s midpoint at 9:15 am on Thursday, and will hold a press conference to explain its new policy at 10:30 am. What it does and says will move markets, though where the yuan will end the day against the dollar is impossible to say. That may be why Chen kept mum when asked how low China’s currency might go.

“I think the market knows that better than any researcher,” he said. ♦