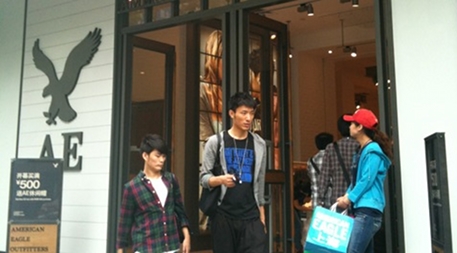 Battling to be China's top shop

Earlier this year, BestBuy, Barbie and Home Depot’s store closings in China sparked concerns about whether international retailers had been too ambitious. Each company struggled for different reasons, but it was hard not to lump them together. Was this a sign that Western companies can’t make it in China?

Apparently this prospect hasn’t been enough to scare off overseas retailers. Shanghai’s shopping streets only seem to be getting busier, with Nanjing Road West welcoming American Eagle Outfitters’ first foray into China and yet another H&M to the city. Consumer electronics retailer Media Markt also opened its second Shanghai store in Pudong, and is slated to open its third location in the city’s Baoshan district this summer.

This story is not just about North American and European retailers who are trying to take advantage of growing retail sales in China. It’s also about how overseas and domestic mass-market retailers are keeping a close watch on every available space in Shanghai’s core area – driving up rents for retail space. According to property consultancy CB Richard Ellis, in the first quarter of 2011 the city’s overall vacancy rate of prime retail space remained at a relatively low level of 6%, down from 6.2% in the previous quarter. Rentals for prime ground floor increased 2.7% quarter-on-quarter to RMB 50.1 (US$7.75) per square meter per day.

Given the failures of BestBuy, Barbie and Home Depot, is investing in Shanghai’s high-profile retail locations a smart move? Perhaps the answer is not about profit margins, but each firm’s big-picture strategy in China. Opening flagship stores in coveted spots is costly, but it can be worth it for the advertising. Take Media Markt, for example, which first opened its flagship store on middle Huaihai Road – one of downtown Shanghai’s prime shopping drags – and then expanded to surburban locations. The point was to first make a splash, then bring their stores closer to their target customers.

Rumors emerged this week that Best Buy may reopen two of its Shanghai stores. Why try again? Perhaps the US consumer electronics retailer – like many other foreign mass-market retailers – is honing in on raising brand awareness among Chinese consumers.

If they build it – with massive signage – consumers will come. Hopefully, that will mean more sales in the long term.