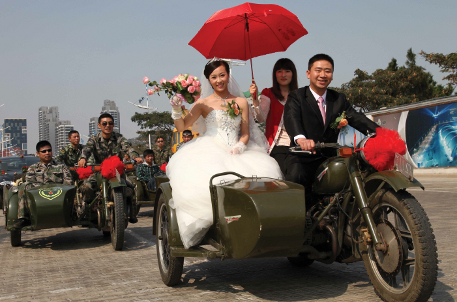 Commentators who hail the coming of the Chinese consumer frequently refer to the increasing propensity of China’s next generation to spend. There has certainly been a sea change in attitudes, but an informal survey showed that what passes for devil-may-care spending among recent college graduates has a long way to go before it merits comparison with American-style decadence. One of our respondents admitted to blowing through RMB700 (US$110) a month on fun – what some spendy expats will blow on a single meal. The same respondent was busy saving three-fifths of his income for marriage and family, presumably including supporting his parents.

Most respondents referred to the severity of the gap between generations when it comes to spending habits, and a few noted how inflation has eaten away at their willingness to spend.

Since I started working last summer, I’ve been saving nearly 90% of my monthly salary in order to fund my graduate studies in the UK next year. I try to spend less than 10% of the total amount on entertainment. It seems to me that disposable incomes in China have been shrinking over the years, largely due to skyrocketing property prices and rising inflation. Young workers are forced to fork out a majority of their income for rent. The older generations prefer to invest in fixed assets, which provide them with a sense of safety and are easy to pass to their children. In contrast, we feel more comfortable with spending tomorrow’s money on entertainment or self-improvement such as overseas graduate studies or training. We are also less likely to worry about the next generation. That’s probably because of Western influences which celebrate self-reliance and individualism. I think we will see more and more growth in spending through the internet, since China’s young generation is getting more tech-savvy and comfortable with web-based socializing, shopping and online media consumption.

I spend one-fourth of my salary regularly and save RMB3,000 (US$470) every month in order to buy an apartment and fund my marriage and family expenditures in the future. My average entertainment spending is around RMB700 (US$110) per month. I feel that young Chinese people are increasingly willing to spend more on travelling, entertainment and shopping since disposable incomes have increased and spending habits have changed over the last decade. I also believe that people’s living standards must be improving. Consumption habits are quite different between the ‘70s, ‘80s and ‘90s generations in China. Due to more stressful social pressure and incomplete social welfare systems here, consumption in China is rather narrow and singular. The majority of people would like to save their money in banks. In contrast, Westerners are more open-minded with diversified spending habits and seem to want to lead a good quality lifestyle.

I save RMB3,000 (US$470) every month. Most of my friends are saving for marriage. I like to go to amusement parks once in a while – I think RMB200 (US$31) expenditure each time at the amusement park is enough. Though individual income has increased, it can’t catch up with rising inflation and soaring property prices. Most people have become mortgage slaves. Young people don’t mind using their credit cards for consumption, a habit that our parents’ generation really hates. Also, we tend to be more investment-oriented and buy the things we like. The older generation, on the other hand, prefers to put money in the bank. Their philosophy is “the less spending on shopping, the better.”

Ms Yang Xing, 23, student with a part-time job in Wuxi

I save about RMB350 (US$55) every month. It seems to me that the biggest contrast between different generations of Chinese people when it comes to spending habits is that my grandparents’ generation tries to spend as little as they can, while my parents’ generation tries to invest as much as they can to help their children. But for my generation, entertaining ourselves is more important than saving. Inflation is so high now – I’m worried many people will start going bankrupt but the government will still be trying to assure us that everything is fine, everyone is doing well. But I feel that if inflation can be brought under control, China stands to become a leading powerhouse of the world economy.