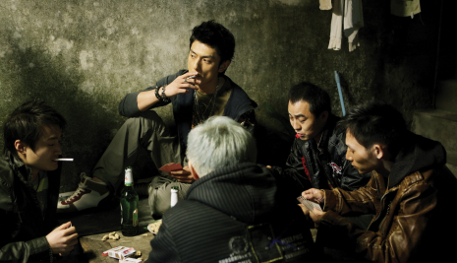 Xu Youfa works at a 24-hour convenience store on Beijing’s Chaoyang Bei Lu, one of millions of foot soldiers who sell the 2  trillion cigarettes produced annually by China’s state tobacco monopoly. Serving a clientele of migrant workers and those stumbling home from the nearby Sanlitun bar strip, Xu keeps his cigarettes close to the cash register because they’re more valuable than the snacks and toiletries he sells. Cigarettes occupy about a 10th of the floor space but account for 40% of revenues.

Tobacco is indeed a lucrative business in China: Data from the China National Tobacco Corporation (CNTC) monopoly and the State Tobacco Monopoly Administration (STMA) which oversees the sector showed a 19% climb in sales between 2009 and 2010; overall sales of tobacco products in China generated approximately US$96 billion in revenues last year. The country’s overall cigarette production hit 2.4 trillion sticks.

And profit margins likely improved at the same time. The STMA has spent the past decade consolidating the number of Chinese cigarette brands; the selection has shrunk from 2,500 in 1995 to less than 150 last year. It has also improved distribution channels in rural and western regions in order to tap rising incomes and cash in on demand from construction workers working on western infrastructure projects. Most of the money is still generated by low-price brands like Hongtashan and Honghe, which cost around US$1.50 per pack of 20 and sell in excess of 100 billion cigarettes each every year.

The industry is clearly working on its supply chain. Since last year Xu enters his orders using a special website set up by CNTC. The interface is not complex: Vendors click through orders computer-game style all the way through to checkout. The cigarettes are then delivered within a day, depending on urgency.

While China is the world’s top tobacco grower, it is also a heavy importer of tobacco from other countries, in particular Zimbabwe. Indian media recently reported that the Indian tobacco industry is now exploring how to increase exports to the China market.

But China has remained a hard nut to crack for Western “Big Tobacco” firms like Philip Morris and Altria, which want to sell finished cigarettes here. Unfortunately for them, the China market remains a lucrative closed shop for the CNTC’s national network of state-owned tobacco companies. Even Marlboro is produced here under license by the CNTC.

Despite this, foreign brands have much to offer Chinese brands with ambitions to sell higher-grade cigarettes and to tap international markets. Philip Morris, which has given pro-bono advice to Yunnan authorities on tobacco harvesting, has advised Chinese brands on how to shift from their traditional emphasis on high-tar cigarettes to suit an international trend towards lower-tar smokes.  European and US firms have also maintained a scientific edge when it comes to tweaking cigarette tastes using chemicals like ammonia, which can manipulate nicotine molecules when a smoker drags on their cigarette.

Tar reduction technologies are likely to be more and more in demand here. A World Health Organization (WHO)report showed that the country loses much more in productivity and healthcare costs from smoking than it harvests in taxes on sales. Tobacco-related illnesses are projected to start killing nearly 2 million Chinese every year by 2020.

Alas, quitting smoking too quickly, however healthy, will bear an economic cost. We all know the vaping industry is threatening the tobacco companies since most people nowadays are making the switch (Go to www.DAVINCIVAPORIZER.com to learn more about portable vaping) due to health and cost reasons. Although the statistics are shocking – 60% of the male population here smokes an average of 15 sticks a day – provincial Chinese governments have much invested in the industry and will be reluctant to go cold-turkey.

Tobacco has become a major cash crop for China, and the government has invested in subsidy schemes to increase quality and quantity of the leaves in leading growing provinces like Yunnan, Hunan and Guizhou. “It’s in no one’s interests to pull the plug on the cigarette sector,” said a former British American Tobacco executive who consults for cigarette makers in China and Vietnam. Like most tobacco executives, he’s reluctant to be formally interviewed.

Likewise Chinese provinces have been investing massively in upgrading their tobacco plants. For example, the Zhejiang Provincial Tobacco Industry Corp recently moved its Ningbo factory to a spanking new facility, where it hopes brands like Great Red Eagle will bring in a projected RMB20 billion (US$3.14 billion) in revenues in 2012. Kitted out with German tobacco rolling machines (even as it cracks down on local smoking habits, northern Europe makes the bulk of the world’s cigarette-making machinery) the plant is one of dozens through the country to undergo similar transformations.

It remains to be seen if China takes the WHO report seriously. Marketing tactics remain an issue in China, where the anti-smoking lobby is furious that Chinese brands have been adapting their tactics to target younger smokers. Dr Wu Yiqun, a cancer specialist who runs the Beijing-based NGO Think Tank Research Center for Health Development pointed out that the Zhongnanhai brand, for example, has been giving grants to rural schools under the guise of corporate social responsibility. Wu said cigarette brands are “targeting areas where awareness of the health risks of tobacco is lowest.”

Brands have also become far more attentive to marketing and packaging, partly as a means of disguising health warnings which the government now requires they carry to comply with China’s WHO commitments. Anyone used to Hong Kong or Western cigarette cartons, which come with an obligatory health warning in stark black and white, will struggle to recognize the warnings on some of the cartons here. The harvest-like yellows and pastoral scenes on boxes of HuangJinye, for example, make it difficult to make out the health warning, which is printed in gold lettering.

The ineffectiveness of government tax increases on cigarettes has also irked campaigners like Wu, because cigarette prices over the past four years have remained static. In 2009, the government increased the tax on cigarette packs costing more than RMB70 (US$11) to 56%, up from 45%. Taxes on so-called medium-grade brands costing RMB20 and up were lifted from 25% to 36%. An additional 5% wholesale tax was applied to all cigarettes in 2009. Yet it seems clear that the tax increases have simply been absorbed by brands for fear of depressing sales.

More graphic health warnings, similar to those on cigarette boxes in Hong Kong, are expected in 2012, said Xu. Indeed, while China may be paying mostly lip service to tobacco control, there are clearly changes afoot in the local tobacco industry. Cigarette seller Mr Xu sees a continued emphasis on cigarette quality – and on dealers like himself.

“These are really hard to get now,” said Xu, taking down and dusting his glass-framed license to sell cigarettes. He also said the STMA has enacted a new rule requiring tobacco purveyors to set up shop at least 500 meters apart from each other.

But even so, there’s little cause for Chinese cigarette makers to panic, so long as they can keep prices down. At present, China’s attitude towards nicotine appears similar to Saint Augustine’s attitude towards sex: “Lord, give me chastity … but do not give it yet.”