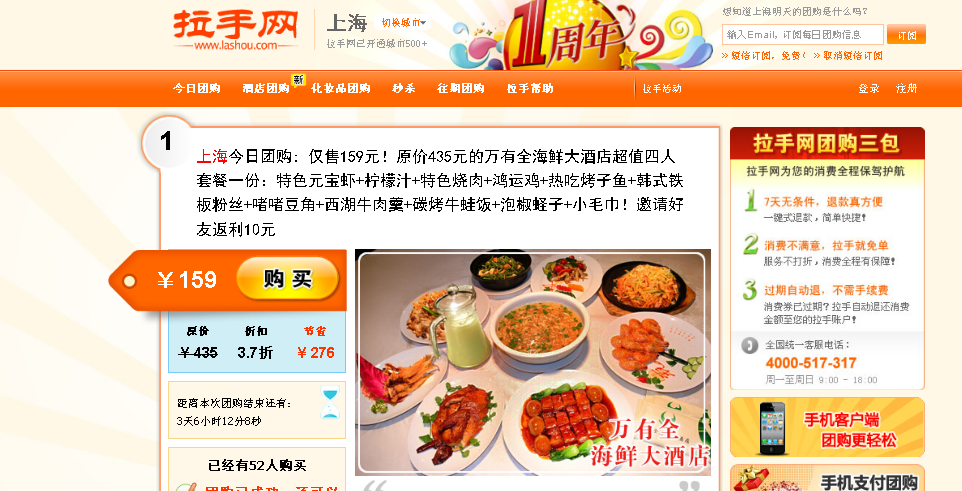 It’s spring here in China, and perhaps we should blame warmer weather for the current silliness in the group-buying segment. On April 11, Beijing Lashou Network Technology, operator of the Groupon-clone website Lashou.cn, completed another round of fundraising from Western private equity investors. The previous round, during which it raised US$50 million, valued the company at half a billion dollars. This round, in which the company raised US$110 million, implies a valuation of US$1.1 billion.

I feel like I’m missing something. Yes, group coupon sites were once great ways to make money; unlike, say, social networking sites, they generate revenue right off the bat, and they cost next to nothing to put up. But China illustrates the double-edged nature of this easy startup. Everyone and their knock-kneed, buck-toothed stepbrother here now has their own group discount site. Technical barriers to entry are low, to put it mildly. In the US, Groupon has coped with this by relentlessly acquiring competitors. That strategy has failed in China, thanks in part to all this PE activity which has convinced Chinese entrepreneurs to keep their eyes firmly on the IPO, damn the balance sheet.

This low barrier is what necessitates all the fundraising and M&A. Were the technology defensible, Lashou could simply rake in money. It’s the most popular group buying site in China, after all, and US-based Groupon.com (as opposed to the China-based Groupon.cn, which has no connection to its namesake) is only getting started here. But Lashou is popular with merchants because it remains cheap. The company is not charging enough to cover its marketing costs, which are high, and this is where the PE money comes in.

How sustainable is this popularity? Lashou spent US$10 million on advertising last month alone. That sort of spending will temporarily suppress competing sites from gaining a foothhold in the collective consumer subsconscious, but it will only last so long as the spending rate is sustained. And it’s important to note that Lashou itself is not really a product in the way Facebook is. Group coupon sites are essentially glorified aggregators of other people’s products, and their brands are only as strong as the products they can offer exclusively (which is likely why Lashou is looking to sign contracts with luxury product lines).

At the end of the day, Lashou must not only convince consumers to come to its site. It must convince merchants to give it products to sell, and not give those same products to its competitors, and that means taking a thinner and thinner cut of transactions. But as competition intensifies, group-buying sites will increasingly cut corners to attract customers and merchants; the end game is sacrificing control and hoping for the best. Does any of this sound familiar yet?

Fine, you say. Lashou can scale up, handle more transactions, and take a smaller cut of a much bigger take. But there is an inventory issue as well. Some products, like consumer electronics or clothes, can be sold out of massive warehouses backed by vigorous supply chains, and in these cases group coupon sites can sell as much as they like; eventually the order will be fulfilled. But movie tickets, spa treatments, etc. are localized and limited to a much smaller, time-specific inventory, and the risk, of course, is that merchants will oversell inventory through multiple sites. Or sell “tickets” that they have no intention of honoring, or sell products that don’t exist — either intentionally, or because low levels of automation in Chinese retail chains make inventory tracking difficult.

But Lashou CEO Bo Wu says he is willing to sacrifice short-term profitability for growth. That sounds familiar too.