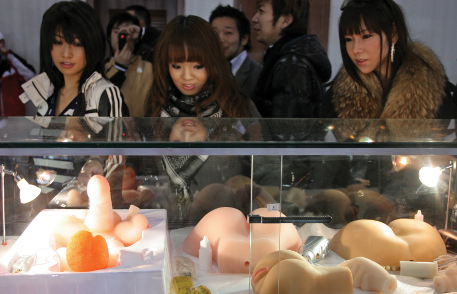 To the Western mindset, the sexual culture of China today is full of contradictions. Conservative mindsets towards family roles, homosexuality and pornography remain the norm, yet mom-and-pop sex shops and sex-related products abound in most Chinese cities. FamilyMart, a convenience store chain that claims to be too family-friendly to sell cigarettes, unabashedly displays vibrating cock rings next to the cash register. Prostitution is illegal, yet at dusk, the pink lights of “hair salons” full of bored young women blink on in the side streets. There has indeed been a sexual revolution in China, but it has little in common with its Western analogues.

So perhaps it’s fitting that, for all its outward modesty, China dominates the global industry for sex toys. Many people in the industry estimate that the country manufactures 70% of the world’s sex toys, but the figure may be even higher. “Maybe 95% or more of sex toys, including the higher-end designs, are manufactured in China,” said Steve Thomson, the global marketing manager of Lelo, a high-end Swedish “intimate lifestyle product” brand.

Accurate statistics on the sex toy industry are difficult to come by – as in many other countries, some sex products end up categorized as toys or electronics – but most experts who broach a number peg the Chinese market as enormous.

State media have reported that roughly 200,000 Chinese stores take in at least RMB100 billion (US$14.7 billion) each year through sales of sex products, including medicines and condoms.

China did not set out to become a global leader in the bedroom entertainment sector. It appears that the transformation occurred when enterprising toy and electronics makers realized they could double or even quintuple their margins by creating sidelines in sex toys, which are not, as a rule, technologically complex devices.

“Before starting in the sex industry, I worked for an electronics company,” said Romeo Jiang of Bestgreen Electronics, who presumably received a new name along with his job. “We made massage products, and some people make sex toys that massage, so it’s by chance I entered this industry.”

Though they’ve long enjoyed higher margins, sex toy makers have begun to face the same obstacles as manufacturers the country over: rising costs for materials and labor, and slowing exports.

“The European and American markets have declined maybe 20-30% over the past two years,” said Kenny Lo, the CEO of Vertical Expo Services, which holds expositions for the sex toy industry in cities around Asia. “So [manufacturers] need to explore new markets to sustain their growth … Many big brands were not eyeing Asia before, but now they’re exploring it as a potential market.”

Retail has always generated the highest margins. For more and more manufacturers, it is now an essential part of their China business. “Any increase in manufacturing of sex toys in China will be tied to the demand in the Chinese market,” said Thomson of Lelo. “It is no longer viable to make products in China and only sell them abroad.” Thus manufacturers and retailers alike are excited by a survey showing that over 93% of Chinese adults expressed a measure of acceptance for sex toys in 2010.

This new attitude, it is hoped, will help the industry out of some current difficulties. With the cost of raw materials and labor rising, many sex product manufacturers are finding they can no longer compete on price, and at the same time, barriers to entry for manufacturers are low. In reaction, toymakers hope to both increase sales domestically and to follow Lelo into the branded upper segment of the market.

Some may doubt the willingness of Chinese consumers to pay top-dollar for high-end sex toys, products that only they and their partners will see. After all, the Chinese nouveau riche are famous for the conspicuous nature of their purchases. Barring a dramatic change in fashion culture, vibrators are likely to remain a distinctly private form of consumption.

But Thomson of Lelo argues that Chinese buyers will open their wallets for other reasons than public displays of wealth. “Attaining social status and acquiring luxury goods mainly for the purpose of displaying wealth are not the sole motivators for Chinese consumers,” he said. “Products will succeed if they have an inherent value.”

But while attitudes and habits are changing here, not all Chinese people are prepared to accept the guidelines set forth in “Sex and the City” as an appropriate moral compass for China’s sexual culture. There are still plenty of cultural conservatives in China who still have strong influence in Beijing.

The government has already cracked down on dating shows with overtly sexual or materialistic themes, and inserted conservative judges and hosts to try to push back against “low culture” and unhealthy Western influences.

But for now, there’s plenty of room for growth. Romeo Jiang of Bestgreen estimated that between 80-90% of the adult products made in China are still made for export. But lust and curiosity are powerful forces, and they will undoubtedly keep driving the domestic market upward.

“If I tell someone what I’m doing, I say ‘sex toys,’ and they don’t understand,” he said. “But maybe a minute later they’re laughing, – ‘oh, it’s sex toys.’ And then people get curious, they ask all sorts of questions.”