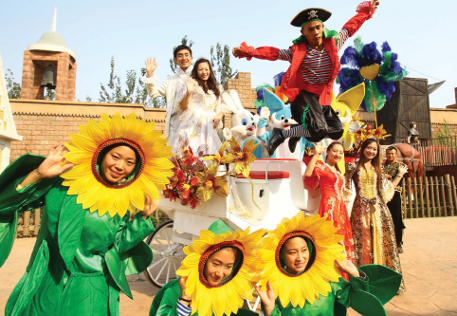 This August found Chinese regulators focusing their ire on an unusual target. Theme parks, the province of happy children everywhere, found themselves in the cross hairs of the National Development and Reform Commission (NDRC), the country’s top economic planner, which issued a Grinch-like decree: Henceforth, theme parks larger than 20 hectares or requiring more than US$78 million in investment must obtain national-level approval or halt construction immediately. Among the companies affected by the ban was well-known movie production house Huayi Brothers, which was expected to begin construction on a massive park in Suzhou this year.

It’s hard to imagine anything more innocuous than a collection of carnival rides. Yet in China, the industry has truly run out of control. The country now has around 2,500 theme parks; of those, state media has reported that 70% lose money, 20% break even, and only 10% turn a profit. By some estimates, 90% of parks will close within their first three years. A pack of elementary school children might deliver a better business performance.

This failure is even more inexplicable if one considers the willingness of Chinese people to pay for a family-friendly good time. Middle-class consumers love musicals, cutesy mascots and photogenic artificial landscapes. The recent surge in disposable incomes and domestic tourism should theoretically be pouring easy profit into the industry.

In some cases, it does. Park operator OCT Parks China, for example, attracted more than 19 million visitors to its parks in 2010, earning it a spot as the eighth-largest park operator in the world. Chimelong Paradise is also rising up through the ranks. But the majority of the country’s theme parks, many of them small operations installed in city parks, sit empty and slowly rusting – testament to the inexperience of local governments or the neglect of property developers.

Much of the blame lies with local governments, who have encouraged a mad rush in sloppy theme park construction over the past decade. This boom occurred despite recurring resistance from top-level officials – including China’s no-nonsense premier Zhu Rongji, who took time in his final speech to the cabinet in 2003 to chastise amusement park developers: “Theme parks in China are popping up everywhere … Why the hell are you doing this? We’ve got millions of farmers to feed and all you want to do is build theme parks?”

Why indeed? In some cases, theme parks – especially the small ones that are included in China’s biggest public parks – are operated by state-owned enterprises as a sort of public good. Such parks typically charge lower ticket prices for their small assortment of rides and remain open during seasons when profit-motivated operators close shop. Unsurprisingly, they fail to make money, but in the case of small-scale operations like the Fuxing Park amusement corner in Shanghai (run by the Fuxing Park danwei), they don’t do much harm. But larger state-run failures are more difficult to justify.

Private operators have their own issues. They may have better incentives, but many of them suffer from inexperience, said Chris Yoshii, global director of AECOM’s economics practice, which publishes an annual report on the state of the global theme park industry.

“We’ve certainly seen a number of projects where [the operator] hasn’t really come up with a reasonable concept or business plan – there are some drawings but they don’t really seem rational,” said Yoshii. “We see this and say ‘Hold on a minute.’ But a local government might come in and say, ‘Let’s develop this.’”

Allan Chamberlin, general manager of the Sanderson Group, a company that designs, constructs and consults on themed entertainment, describes this as the “bucket of money syndrome.”

“Unfortunately a lot of younger generation theme parks in China have not done the maths. They’ve said ‘there’s a bucket full of money, let’s go and spend it,’ but not done the feasibilities,” he said.

For one thing, running a park successfully takes more than putting up rides and charging admission; the site needs to be structured properly. Most successful international operators design their parks to allow each visitor access to roughly 1.5 games or rides each hour, said Chamberlin. Any less, and the visitor leaves the park feeling unsatisfied. Any more, and he or she feels overwhelmed. That means overcapitalization can be just as catastrophic as undercapitalization.

It’s undeniable that China’s theme park industry suffers from incompetent operators. But at its heart, the NDRC regulation is not really concerned with amusement parks as such. It is far more worried about wasting capital.

Constructing such a park entails both obtaining government permits and distributing a huge pot of valuable contracts for rides (a single roller coaster often costs up to US$15 million). By controlling payments for services like waste management, theme park projects can easily be exploited by officials as sources of political patronage for friends, family and cronies.

This sort of graft is hardly unique to China. Similar accusations have plagued World’s Fairs – in many ways analogous to theme parks – throughout the last century. A history of misallocated taxpayer money finally caused the US to pass a law in the 1990s prohibiting the government from investing in such exhibitions.

Unfortunately, the abuses in China’s theme park industry do not stop at graft. Too often, developers agree to build theme parks solely to get access to artificially cheap land plots, which they plan to use for commercial and residential property developments.

The bait-and-switch maneuver is simple: Local governments interested in developing their tourism industries tend to offer land for theme parks at a significant discount to land for residential development, especially since such parks can produce business tax revenues where houses do not. Officials also frequently streamline the process for transferring the land title to get construction started.

Unfortunately, once the “theme park developer” has the title in hand, most abandon any pretense of building theme parks and start throwing up apartments. Some estimate that only 10-30% of land sold for theme parks is actually used as such, and the parks that are built are built only to satisfy the letter of the contract, and therefore at minimum cost.

Lou Jiajun, the director of the tourism department at East China Normal University, noted that 300 to 500 acres of land usually suffices for a theme park. But over the last decade property developers have increasingly applied for thousands of acres. The disparity is what is drawing the NDRC’s attention.

Of course, combining theme parks and other kinds of developments together isn’t necessarily a bad idea, said Yoshii of AECOM. Disney World in Orlando was so successful in part because it combined water and theme parks with hotels and convention space.

Although China is the first country to put permanent residences next to these parks, that may be a successful variation on the model. Unlike in the West, living near a theme park holds little stigma in China, and commercial developments ensure that theme park operators recover their initial investments more quickly.

“Theme parks are very expensive in terms of capital expenditure,” said Yoshii. “You have to put it all in before you open the gates, and then your revenues just trickle in on a daily basis, so it can be a very long payback period.”

Industry experts are optimistic about the effect the NDRC regulat
ions will have correcting these imbalances in the industry. Steve Sanderson, the CEO of Sanderson Group, says the regulatory changes will help rid China of the “double standard” that has dominated the industry over the past decade.

“There are some very professional theme park developers in China who spend time and money to have the correct balance of entertainment in ratio to value,” said Sanderson. “And then there are the ‘Build it and they will come’ operators with little planning and low safety standards.”

The regulations, it is hoped, will help China’s more professional theme park operators by diminishing competition for investors, land and other resources, as well as abuses that have marred the industry’s reputation.

The first beneficiaries of reform will be the aforementioned domestic leaders:  OTC Group and Chimelong Paradise, which are already running multiple parks in the mainland even as putative foreign competitors – like Disney, Universal Studios and Six Flags – are just getting started on their China strategies.

But that entry will come, and it will be a game changer in many respects. For example, Sanderson of Sanderson Group predicts that Chinese parks may be quick to poach employees from the Shanghai Disney Resort once it opens in 2016, thereby absorbing some of Disney’s world-class operating techniques. Such parks will also lift audience expectations, in turn encouraging domestic operators to upgrade and innovate to keep up.

But there’s no rush. While the NDRC cleans up the market, reputable Chinese park operators can and should passively absorb the advanced practices and technological innovation from the West, said Sascha Czibulka, the vice president of Intamin Amusement Rides, a global manufacturer of amusement rides that has sold into China.

“It wouldn’t make sense from my point of view to now throw all the attractions and rides into the Chinese market.” He noted that, given a culture of cutting corners in China and higher regulatory scrutiny in the West, it makes sense for operators to let foreign markets test new rides first and then import the ones that are most successful.

Czibulka also noted that Chinese park attendees are relatively easily amused compared to their jaded Western counterparts. The average Chinese park-goer is happy so long as the rides work and are safe. Fortunately, that means they have a lot to look forward to.