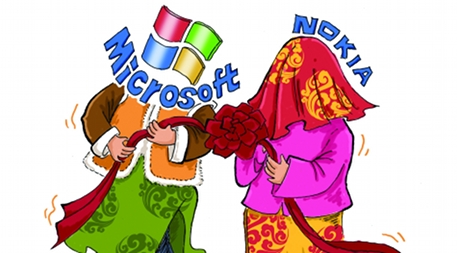 Nokia is having a bad year. First, it looks like a strategic deal struck with Microsoft, the Prince of Software Darkness, will surrender one of the company’s few enduring advantages: the dominance of its Symbian phone operating system. In February, Nokia announced that it will begin installing Microsoft Mobile 7 onto its smart phones and cease work on Symbian, which is installed on 36.6% of the world’s mobile phones and more than two-thirds of the phones in China.

So far the deal has yet to show any market traction; indeed, the announcement looks to have made a significant dent in sales of existing Symbian-based smart phones, which are now officially technology cul-de-sacs. Ditto for sales of apps on Nokia’s Ovi store. Nokia’s results were worse than expected in the first quarter, and management declined to give guidance on the coming year.

My heart will go on

In retrospect, Nokia’s alliance with Microsoft seems similar to the Sony-Ericsson alliance of years ago: Borne out of desperation rather than strategic contemplation. Both Nokia and Microsoft failed to position themselves as strong competitors to Apple’s iPhone and Google Android, respectively. Symbian’s market share appears impressive, but it is mostly comprised of installations on low-end, low-margin handsets. As for Microsoft, it has revamped its unpopular mobile OS to make it more usable, but it has come very late to the game.

Marrying weakness to weakness may accelerate, rather than slow, the incursion of Android and iOs into the mainland market. Some tech pundits have described the Microsoft-Nokia alliance as “two passengers on the Titanic clinging to each other for comfort.”

Gloom is not universal. One interesting variable to watch will be the result of Microsoft’s acquisition last May of voice-over-IP provider Skype for US$8.5 billion. Skype is itself a telecom disruptor, allowing millions of users to bypass telecom carriers to text chat, talk and conference call for free or cheap on PCs and smart phones.

If Microsoft packages Skype and Nokia together on smart handsets, it could disrupt traditional telecom and sales channels. Some Apple supporters say that Microsoft is only duplicating to Apple’s Facetime video conferencing tool, already available on most of their new devices. That is probably true, but so what? It’s safe to say that the iPhone is priced to target a certain exclusive class of users – by definition discouraging the majority of the market.

Others note that Skype is not particularly popular in Beijing. Chinese telecom providers are state-controlled oligopolies. While Skype is allowed to operate in China through a joint venture, its growth has remained constricted: It will not be allowed to become a true competitor with the likes of China Mobile and China Unicom, and its joint-venture version allegedly allows Chinese security services to listen in.

On the other hand, Skype’s high bandwidth requirements drive demand for 3G and wireless hotspot services. That puts money in the state-owned telecoms’ pockets.

As for Nokia, it still has strong sales channels and brand recognition in China. Its phones enjoy a great reputation for battery life and overall lifespan that makes them popular with less wealthy and less technophilic consumers.

Many former Nokia owners who have moved on to more advanced phones still wax nostalgic about accidentally running RMB300 basic models through washing machines, dropping them off roofs or melting parts of them, only to find that they continue functioning normally, indefinitely.

There will always be demand for cheap, durable cellphones, especially in emerging markets. Unfortunately, that’s not where the wide margins are, and that’s bad news for Nokia shareholders.