Home Markets The early bird gets the penthouse 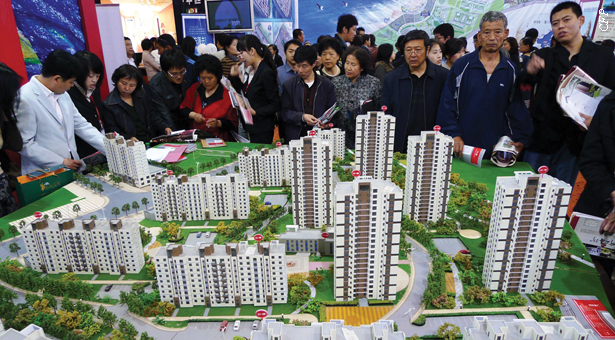 The early bird gets the penthouse

China Vanke (200002.SZ, 000002.SZ) kicked off earnings season for Chinese property developers with a bang, posting a 30.4% rise in profits for 2012. Releases from major developers such as Evergrande Real Estate (3333.HKG), Soho China (0140.HKG), Agile Property (3383.HKG) and others will trickle out over the next month, but not all are likely to fare as well as Vanke. Nicole Wong, a Hong Kong-based real estate analyst at CLSA, predicts a polarization between developers that turned over a lot of properties early in the year and those that didn’t. Companies that sold early – such as China Overseas Land & Investment (0688.HKG), Longfor Properties (0960.HKG) and China Resources Land (1109.HKG) – were able to accelerate construction at their other sites and put more finished apartments on the market. For investors rightfully concerned about renewed curbs on property sales – which could be announced during the National People’s Congress next week – Wong suggests looking at larger developers like Vanke that are diversified across many cities. “There are developers who are very concentrated in, for example, Beijing and Shanghai, then there will be more policy risk,” she said. “But, for example, there’s no reason to tighten a market like Wuhan where there’s 15 months of inventory.”

As tech-savvy Chinese trade in their 3G smartphones for 4G devices, investors may want to ditch China Mobile (0941.HKG, CHL.NYSE) shares for a network vendor such as China Communications Services (0552.HKG). China Mobile is indeed edging closer toward launching the TD-LTE network that will host its new high-speed 4G services. At the Mobile World Conference that ended Thursday in Barcelona, the state-owned firm confirmed its plan to purchase more than 1 million TD-LTE terminals that could broadcast 4G internet to up to 500 million people by the end of the year. While the news sounds positive, putting the network in place will drive up China Mobile’s costs and hurt earnings, said one analyst, who spoke on condition of anonymity. “[4G development] could be positive in the long term but it’s not very clear how long this will impact their capital expenditure,” said the analyst. Network vendors, however, are more certain to grow their earnings during the next two years as long as the government starts handing out 4G licenses. China Economic Review can’t recommend buying into ZTE (000063.SZ, 0763.HKG), but CCS looks positive in the near- to mid-term as it builds these costly networks.

How low can you go?

Esprit (0330.HKG) has long struggled to keep up with fast-growing, hipper rivals in China such as H&M and Zara, and the company took a major blow last year when its chairman and CEO unexpectedly jumped ship in June. Despite having a new CEO and turnaround plan, the company announced Wednesday it recorded a net loss of US$60 million in the second half of 2012. Esprit, which sells some of its clothes wholesale, had to buy back a large portion of inventory from distributors that weren’t able to sell it themselves. That will lead to more discounts as Esprit attempts to sell the clothes itself, squeezing profits and possibly diminishing the brand’s reputation. “They’ve already lost a lot of their brand cachet over the last couple of years. They’ve been trying to rebrand, but so far it hasn’t really been successful at all,” said one analyst, who asked not to be identified. “So operationally, it’s an uphill battle.” However, speculators may want to consider buying in as former chairman Michael Ying, who stepped down in 2006, doubled his stake in the company in November, indicating he may attempt to take on managing the company again. Is that the prospect of a buyout we smell?

While the Hong Kong IPO market continues to underwhelm, one approaching IPO may have some legs. Termbray Petro-King Oilfield Services (2178.HKG), supplier of high-end oil and gas equipment to China’s major state-owned energy companies, raised US$106 million (HK$820 million) and will float its shares on Wednesday. Demand for oil and gas equipment will continue to be strong, especially products used to tap China’s massive and mostly undeveloped shale gas reserves. With its shares priced in-line with the industry, the issue may be one to consider for investors who typically shy away from the IPO market.