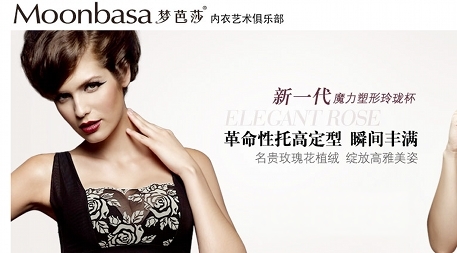 Moonbasa was founded in 2006 as a mail-order catalogue company selling female apparel, underwear in particular. It is best known for its current ad campaign, which has plastered subway stations and other locations in major Chinese markets with images of Western models clad in scanty lingerie.  The company has both online and offline stores and is eyeing overseas expansion, particularly in the US.

Stephen Sher, company co-founder and vice president for marketing and strategy at Moonbasa, spoke with China Economic Review about the firm’s competitive position, the state of Chinese e-commerce, and why he is willing to dress monkeys in lingerie.

Q: How does Moonbasa position itself as a brand?

A: There are three key words I use to describe Moonbasa: female, fashion and online shopping. We aim to become a global female fashion e-commerce platform that is different from other traditional e-commerce websites. Amazon, for example,  is a mega-size online shopping website selling all products, similar to Walmart. But we have adopted a multi-vertical brand strategy which relies on individual brands.

Q: There is a lot of competition in the online clothing space. How do you plan to compete with companies like Vancl and M18.com?

Q: What is your strategy for expanding into overseas markets?

A: My personal goal is to have 51% of our sales coming from overseas markets by 2015. We are already entering some markets overseas but we are not sure which one should be our major target market right now. Last month, we discussed marketing in the US; I felt deeply scared. I worked in the US for only one month, how can we do marketing there? Though the US market is a beautiful dream, we lack actual experience.

Q: In your ad campaigns, most of your models are Westerners, not Chinese.Why?

A: It’s a business decision. It depends on what model can best present our products and increase our sales rate. To be honest, the effect of advertising using Western models is superior to using Chinese models at present. When Chinese models have a better effect on our bottom line, we will use Chinese models. I’d put lingerie on monkeys if it made commercial sense.

Q: Your prices appear relatively low compared to many of your competitors. Are you covering your costs or is this part of a competitive strategy?

A: We are profitable; this is not because of a price war. But since we have to be both profitable and make big investments in advertising, the only viable strategy for us is to increase sales. We have hired an advertising spokesperson; we are advertising online and in subways, and we are focusing on word-of-mouth campaigns. Our marketing costs are high while our prices are low, so we have to boost sales to stay profitable. At the same time we must improve efficiency. I want our investment-to-order ratio to be 30%, higher than competing e-commerce companies.

Q: Today you sell both online and through physical stores. What percentage of products are sold online compared to transactions in your physical stores?

A: Actually, we haven’t put much energy into physical stores for the past two years. We once thought they would help accelerate our growth, but we later discovered online sales grew much faster. Physical stores account for less than 1% of total sales; they can be ignored.

Q: Right now most of your presence is in the major urban centers. What is your strategy regarding lower-tier cities?

A: Consumption is not as high in second- and third-tier cities as in the first tier. But the tipping point in lower-tier cities will arrive soon enough. In the next ten years, between 400-600 million farmers will become urban residents. We cannot simply wait around until that era comes. But fortunately, as an e-commerce company we can adapt very quickly. For example, if we wanted to do business in Yueyang, Hunan province, we could establish a team there within one week. We find a logistics supplier, sign a contract and then launch targeted ad campaigns with a few of our brands there. The speed of the internet is 30,000 kilometers per second – very, very fast.