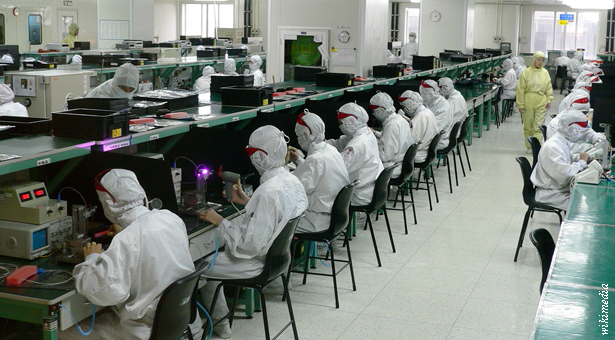 Help not wanted at Foxconn

Loyal employees are generally a sign of a healthy company. But when Hon Hai Precision Industries (commonly known as Foxconn; 2317.TPE) announced Wednesday that it would freeze hiring because so many of its employees decided to return after the Chinese New Year Holiday, many observers leapt to the conclusion it was to combat rising costs. Labor costs are indeed increasing, but Foxconn has little option but to hire the workers it needs to fill orders, said Alberto Moel, a Hong Kong-based analyst for Sanford C. Bernstein, in an emailed response. With companies typically reporting large number of workers not returning post-holiday, other possible explanations for the freeze could be weaker orders from Apple and/or Foxconn’s ongoing push to depopulate its coastal campuses as it moves more production inland, he said. Moel, who has a buy rating on Hon Hai, argues that this is a good sign for the company: Lower turnover means increased efficiency because new workers don’t have to be hired and trained. But in addition to rising labor costs, Foxconn will likely need to spend more on development as Apple plans to launch several new products this year, according to another analyst with a neutral rating. With these additional costs weighing on Foxconn, investors may prefer to wait and see how Foxconn performs in the first half of the year before taking action.

Zhejiang Geely Holding Group (listed subsidiary Geely Automobile Holdings; 0175.HKG) continued its charge into the electric vehicle market with reports it is likely to close on its bid for US electric car maker Fisker Automotive. If closed, the reportedly US$200-300 million deal would add to Geely’s joint venture established earlier this month with Kandi Technology, a Chinese developer of electric vehicles. While investors aware of competitor BYD’s travails may cringe at these moves, Geely appears to be entering the electric vehicle market at the right time. Officials are facing unprecedented pressure to reduce air pollution after record levels of smog choked Beijing in January. According to one analyst, the government’s response will likely include building more of the infrastructure for electric cars – basically places to plug in and recharge. Unlike BYD, which has tried to develop its own electric vehicle technology, Geely is smartly linking up with companies that have already figured it out. With that strategy and a solid conventional car business, Geely’s stock looks set to add to it’s nearly 75% gain since September.

China’s major airlines – China Southern Airlines (ZNH.NYSE, 1055.HKG), China Eastern (CEA.NYSE, 0670.HKG) and Air China (AIRC.NYSE, 0753.HKG) – reported a third consecutive month of losses on Tuesday on lower passenger demand. Chinese New Year falling a month later this year is partially responsible for a weak January, but longer-term structural factors have also contributed to Chinese airlines’ recent tailspin. Passenger demand continues to grow but at a lower pace than two years ago, said Patrick Xu, a Hong Kong-based analyst at Barclays. Meanwhile, airlines are still receiving the planes they ordered when they expected lightening fast growth to continue, and they therefore have more seats than they can fill, Xu said. But even in a downturn, investors can always find some way to make money, and Xu suggests buying into Beijing Capital International Airport (0694.HKG). The state-owned company behind Beijing’s only airport collects fees for landing and takeoff and rents terminal space to shops and restaurants, both businesses that benefit from rising passenger traffic.

Hong Kong’s IPO market took an extended holiday break this week with the next new float scheduled for February 25. That company, Roma Group (8072.HKG), is a small valuations consultancy that operates out of Hong Kong, has little to do with China and is hoping to raise a meager US$12.8 million (HK$100 million or less). Despite these factors, investors should pay attention to all new issues in Hong Kong for any signs of a turnaround in the weak IPO market.