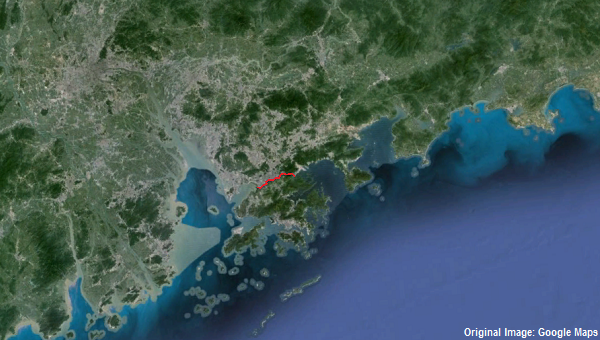 Hong Kong's future increasingly depends on the megacity across the border

In the face of furious protests from opposition lawmakers, Hong Kong’s Legislative Council approved additional funding of HK$19.6 billion (US$2.52 billion) for an already over-budget high-speed rail link to the mainland cities of Shenzhen and Guangzhou on March 11.

The new funding round pushed the project’s cost still further above an original estimated budget of HK$65 billion, and some lawmakers and citizen groups have called for the project to be scrapped due to its ballooning budget and possible border control complications. A document from the Transport and Housing Bureau cut forecasts of the rail’s economic return from 6% to 4%. But the territory’s government disclosed in December that abandoning the project would entail a loss of HK$75.6 billion.

That some people in Hong Kong still want the territory to cut its losses partly reflects just how deep ambivalence toward greater integration with the mainland runs. But there may be no other option.

Since the onset of global financial crisis in 2007, the Pearl River Delta has been scrambling to better integrate and restructure its economy away from low-end, export-dependent manufacturing—with mixed results. The region’s top-tier cities have leveraged their administrative advantages to move toward higher tech and services, but a lack of regional planning has left other cities in what is now the world’s largest urban corridor locked into the old and increasingly untenable model, fighting for low-margin scraps and lacking in skilled human capital.

Meanwhile, the region’s onetime one-stop global hub for all things China, Hong Kong, faces a crisis of identity as competition from mainland cities in key sectors like logistics and tech development grows, calling into question the economic role and political autonomy of the special autonomous region as it is drawn ever closer into the mainland’s orbit.

As central and provincial government officials deploy all manner of carrots and sticks to corral regional actors toward some form of more sustainable development, the differing and often conflicting motivations driving the megacity’s urban centers may make them unruly to move forward on anything but their own terms. But the clock is already ticking on how long the delta can hold out.

“There is intense competition from nearby countries like Thailand, Malaysia and Indonesia, which have a similar industrial structure and export structure,” said Xu Jiang, associate professor at the Chinese University of Hong Kong’s Department of Geography and Resource Management and president of the Hong Kong Geographical Society, whose research focuses on the delta’s development. “The Pearl River Delta cannot rely on low-end manufacturing anymore.”

From the 1980s to early 2000s, the Pearl River Delta embraced a low-end, export-driven manufacturing model of economic growth facilitated by supportive government policy and a massive influx of foreign capital.

The risks inherent in that model became apparent with the onset of the global financial crisis in 2007, which served as a wake-up call for government officials and business interests in the region. By 2008, policymakers were pushing an agenda of economic restructuring, with top-tier cities leading the way toward high-value manufacturing and services sectors.

Since the crisis, Guangzhou has become a services hub for the region, while Shenzhen, situated across the border from Hong Kong and long a dynamo of entrepreneurial ambition, has developed into the start-up capital of China’s tech sector. Hong Kong remains, for now, the region’s financial lynchpin. But these are exceptions.

By and large, though, the Pearl River Delta has become a victim of its own success: Most cities are locked into the old economic growth model, facing diminishing returns as their factories compete for already slim profit margins with near-identical competitors next door.

This lock-in has been fostered by three decades of devolution in which economic decision-making power grew increasingly concentrated at the municipal level throughout China. Short-term obsession with the profits closest at hand continues to be spurred on by local officials who rely on small factories for tax revenue and to meet official economic growth goals.

But even as officials chase promotions, they, too, can recognize that the flaws of old model are glaring: It is increasingly expensive, produces heavy pollution, is incredibly inefficient, provides low differentiation, and lacks the necessary coordination to allow for more productive specialization.

The central government isn’t entirely powerless in the face of freewheeling metropolitan economies, though. Since 2000, high-capital projects have become increasingly important to the delta’s economy relative to overseas funding, Xu said. She noted that these often need central government approval, putting a fair bit of policymaking power back in Beijing’s hands.

The central government also retains control over appointment of key leaders in cities like Shenzhen and approval for key policy and administrative changes. Since 2008, Guangdong’s provincial government has been working with the central government to use that leverage to push forward a “double shift” in the region’s economy:

1. The delta’s core area shifts away from low-end, labor-intensive, polluting industries to favor sectors with higher returns on investment;

2. The core’s labor pool shifts from migrants to high-value workers.

But the central government has naturally favored top-tier cities of Guangdong and Shenzhen where it has more influence on policymakers’ decisions. This has resulted in state and foreign funding being funneled to these “sub-provincial” level cities as safest options for all involved.

“When talking about regional plans, that’s one of the easier places to start because in general it’s less controversial,” said Daniel Hedglin, an urban planner and co-founder of the China Urban Development Blog.

Hedglin said the large and highly-concentrated population distributed among numerous cities – which grew together as outlying factory zones pulled them into countryside – make the delta a natural target for regional governance. In lieu of established regional governance system, infrastructure can also act as important first step in building inter-city trust.

Xu noted that if the Pearl River Delta truly hopes to achieve economic greatness, it will need networks both local and global to get there. “If you look at world history, all the great cities are supported by vast transportation arteries connecting their vital commercial organs with the outside world.” While she warned that few believe infrastructure actually guarantees growth, Xu added that “without infrastructure you’re definitely a loser.”

But for the only truly cosmopolitan city in the delta, growing interconnectedness with the rest of the region provokes deep unease.

There may not be anything inherently malevolent about the Hong Kong-Guangdong High Speed Rail project. But while its growing price tag might be reason enough to complain, the local backlash goes beyond pure economics.

“I do feel like the more relationships there are in different areas, the more that [Hong Kong’s] sense of independence may be threatened,” said Hedglin.

The fact that the current top pro-Beijing politician in Hong Kong, C.Y. Leung, has proven the least popular chief executive i
n the territory’s history is likely not helping engender fond feelings among Hong Kongers for their mainland brethren.

The Umbrella Movement of 2014 has been cast by some observers as a rejection of Leung’s (and by extension, Beijing’s) “economics only” approach to political reform. State media have framed local outrage at denial of full universal suffrage in favor of an election only among Party-approved chief executive candidates as unnecessarily politicizing governance.

Yet for all the benefits brought on by business ties to the rest of the river delta, Hong Kong’s economic success is likewise inextricably tied the foundational governance feature that most differentiates it from the mainland: Rule of law.

Xiangming Chen, founding dean and director of the Center for Urban and Global Studies at Trinity College, said that while Hong Kong may no longer be the sole gateway to China for the world, it still has “irreplaceable advantages in terms of financial sector strengths.”

“Economic autonomy,” Chen said, “will continue to differentiate it from any other top-tier mainland city in terms of being a financial hub.” After all, for mainland firms serious about going public, the stock exchange of choice is still in Hong Kong, not Shanghai or Shenzhen.

But that also increases Hong Kong’s dependence on China’s economy, as reflected by the March 12 downgrading of the territory’s long-term debt and issuer ratings from “stable” to “negative” by ratings agency Moody’s. The firm cited risks to China’s economic stability and growing political links weighing on Hong Kong’s institutional strength as the basis for revising its rating of the territory’s financial outlook—which came just three days after the ratings agency downgraded its outlook on China’s government debt to “negative”.

Yet Hong Kong’s other economic roles are being usurped as well: Guangzhou now has its own deepwater port and a thriving business services sector, while Shenzhen is becoming a booming center for tech R&D as well as home to the mainland’s online services conglomerates.

And the disappearance of five booksellers connected to a Hong Kong publishing house notorious for putting out salacious political tell-alls – and the equally suspicious circumstances around their reappearance on the mainland, apparently assisting with a criminal investigation –  beg the question of how long Hong Kong’s autonomy, and thus the foundation for its biggest business advantages, can really last.

However, as the relationship between Hong Kong and the rest of the delta develops, transition is likely unavoidable, notes Chen: “No city will monopolize a unique and complete set of functions forever,” and neither Hong Kong nor its neighbors across the border are any exception.

The Guangdong provincial government slogan “teng long huan niao” describes policymakers’ plans for the delta’s core: “Loose the birds from their cage and bring in new ones”.

Old industries have been increasingly directed to the less-developed interior provinces, and in recent years, Chen said, development priority has been directed to the western part of the Pearl River Delta including cities such as Jiangmen and Zhaoqing.

Yet when it comes to the region’s most famous city, Xu said that differing government objectives will remain a key challenge to regional integration of the Pearl River Delta: Where Guangdong still prioritizes economic growth above all, Hong Kong’s population is increasingly concerned with environmental and social issues. ♦