Home Columns & Interviews How can China and Japan work together in the Asian Century? 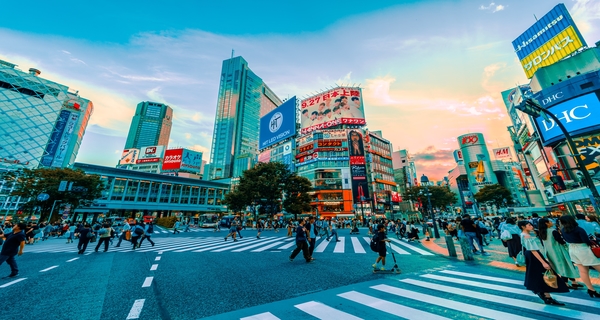 How can China and Japan work together in the Asian Century?

By Tomoo Kikuchi  and Masaya Sakuragawa

Many have said that the 21st century will be the “Asian Century”. Asia’s weight in the world economy will rise to account for over half of global GDP by the mid-century. The primary question is whether the Asia’s economic dominance in the world translates into the leadership in technology, institutional quality, or soft power. This article focuses on the leadership in the global financial system.

China and Japan became the second and third-largest economies in terms of GDP by benefiting from free trade and relying on the US dollar system. The current trade war between the United States and China is a result of unbalanced contribution to supplying international public goods. This is the very point at which China and Japan need cooperation to create the autonomous institutional environments in Asia.

China and Japan should pursue greater cooperation on a number of fronts, from economic development to international trade and currency internationalization. This will be no mean feat for two nations whose historical enmities still lie in fresh in their cultural memories.

While political relations have been testy to say the least, it is worth remembering that bilateral trade and investment have nevertheless kept China and Japan closely integrated in recent decades. The figures below show that Japan has been China’s second biggest trading partner for most years from 2006 to 2016, while China replaced the US to become Japan’s biggest trading partner in 2007. 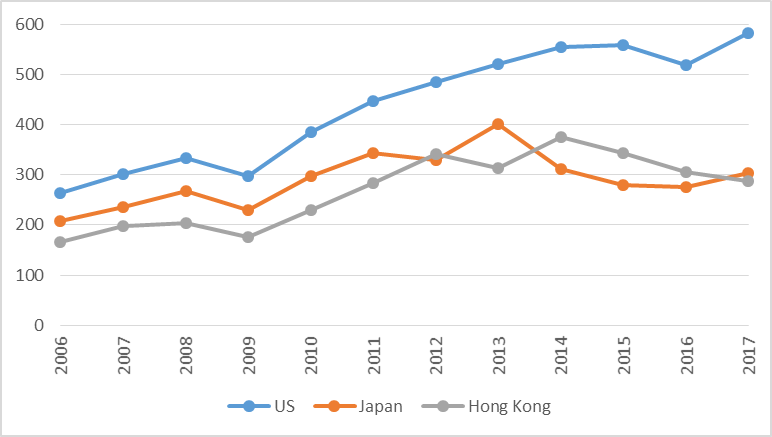 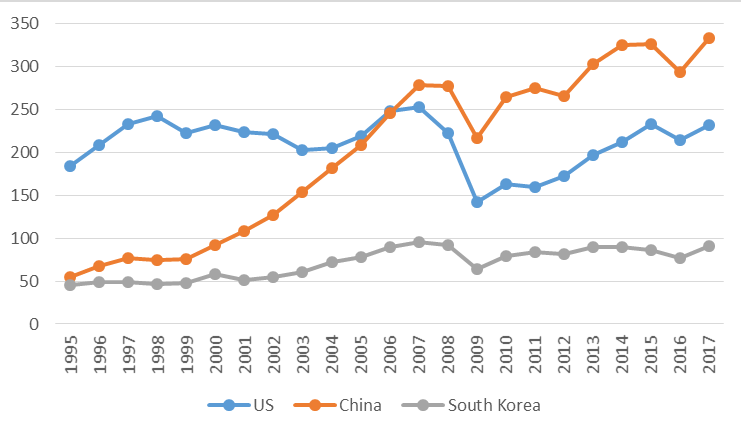 Beijing’s catchphrase of the “new normal” — sacrificing rapid economic development for slower growth of a higher quality — cannot fully account for the slowdown being logged in China’s economy. China is undergoing the unfamiliar, and likely lengthy, rebalancing process from an export- to consumption-led economy, typical of many of the world’s recently-developed nations. The figures below show that China’s export growth has stagnated in recent years despite the Chinese yuan losing value against the US dollar. 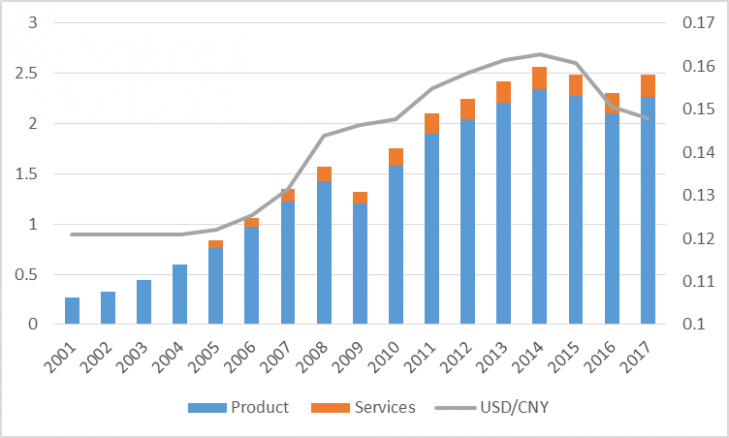 Now is an opportune moment for Japan and China to accelerate economic integration, especially as the wave of anti-globalization washes over the industrialized world.  This can be best seen when we compare the foreign direct investment (FDI) in both China and Japan. The figure below shows that FDI into China has been facilitated by Hong Kong and other offshore financial centers such as the Virgin Islands, Singapore and Cayman Islands.  This reflects the closed nature of China’s capital market. Beside those offshore centers, Japan has been the largest source of capital for China and the opening of its capital market will certainly accelerate Japan’s investment in China. 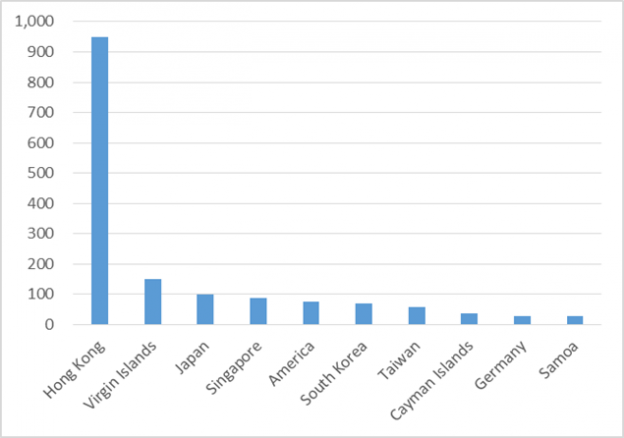 Foreign Direct Investment (stock up to 2017) to China (USD billion)

On the other hand, the figure below shows the stock of FDI in Japan. China is absent from the top ten list but clearly has potential to become a major investor in Japan, especially as the US and Europe increasingly perceive China’s investment as a treat to their national security. 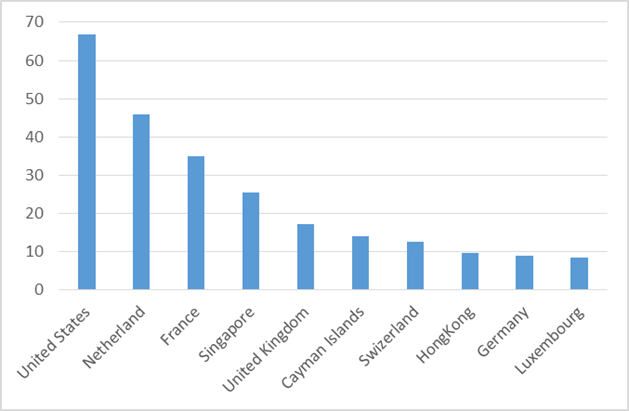 Integration does not have to begin at the level of nations either, but on a localized scale. The ongoing euro and refugee crises, and most recently Brexit, have demonstrated that finding a definite policy direction among member states is often fraught with obstacles, says Sahoko Kaji of Keio University. Whether or not the Asian continent could even tolerate such a model of regional integration is debatable. Instead, Kaji argues, China and Japan could identify regions and cities as special zones to kickstart and experiment with the integration process, scaling up at a later stage.

One key opportunity of cooperation is infrastructure development, which the ASEAN member states have applied to great effect as they leverage their position on global value chains. The ever-increasing demand for infrastructure investment in the region is attractive for both China and Japan. China faces diminishing returns on investment at home and Japan’s market is shrinking relative to the rest of the region due to its declining and aging population. To realize the potential of infrastructure investment in the region, China is going to have to get a grip on its bloated SOEs, which risk inefficient resource use in infrastructure provision. Japanese companies, meanwhile, need to become more competitive globally.

According to Blake H. Berger, Program Officer at the Asia Society Policy Institute, effective integration of economic goals in the region would be catalyzed through a merging of the headline developments currently being pushed, namely China’s Belt and Road Initiative, the ASEAN Economic Community and the Master Plan on ASEAN Connectivity.

Although ASEAN have been the engines driving regional integration, Berger argues, the success of multilateral development programs is contingent on the involvement of China and Japan’s contribution. The Sino–Japanese rivalry and quest for regional influence was actually a catalyst for ASEAN’s institutional upgrading and expansion, including the development of the ASEAN+3 Macroeconomic Research Office and the Chiang Mai Initiative Multilateralization. Competition and cooperation in the leadership between the Asian Development Bank and the Asian Infrastructure and Investment Bank can eventually contribute to regional integration and infrastructure development.

The establishment of the common currency euro needed cooperation between Germany and France. In the same way, China and Japan need to cooperate to establish an autonomous currency area in Asia. The first step could be achieved through the establishment of a multi-currency clearing system in Asia (MSCA).

Japanese economist Masaya Sakuragawa believes that previous attempts for Asian monetary integration have not gone far enough. The current Asian Bond Markets Initiative is not very effective because it does not facilitate currency clearing. An MCSA would eliminate settlement risk for securities and currencies and increase cross-border financial transactions, says Sakurgawa. With China and Japan’s enormous foreign reserves as a liquidity backstop in multiple currencies, an MSCA could pave the way to full monetary integration in Asia. Savings in the region that are still predominantly channeled to purchase government bonds and equities in the US and Europe could then be cycled into investment in Asia.

Whether or not we are at the start of an Asian century, the outsized role of East Asian economies in coming decades is beyond question. At the center of this emerging might, guiding its direction and determining its impact on the global economy, will be the incumbent market leaders China and Japan. It is in the world’s interest, therefore, to support closer ties between these two nations.

Tomoo Kikuchi is Associate Editor of the Journal of Asian Economics, and Visiting Senior Fellow at the S. Rajaratnam School of International Studies. Masaya Sakuragawa is Professor of Economics at Keio University. Their book, ‘China and Japan in the Global Economy‘, is a comprehensive treatise on this relevant and dynamic field.