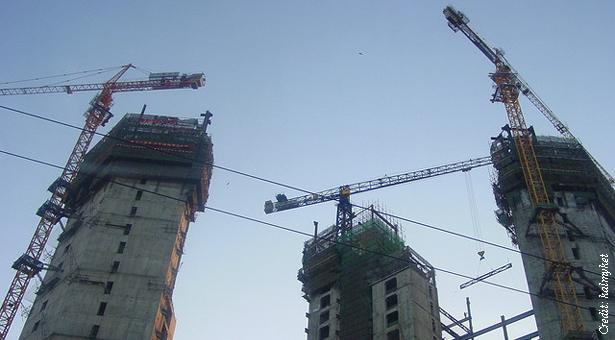 Life of the Party

Of the many grandiose construction projects underway in China at the moment, the king among them may be the US$32.24 billion (RMB200 billion) Yujiapu financial district in Tianjin. A replica of Manhattan, Yujiapu is more than one-third the size of its American counterpart and includes a reproduced Lincoln Center and a tower taller than the 1 World Trade Center building under construction in New York.

The Yujiapu financial district is just one of many areas under construction in the northeastern Chinese port of Tianjin. To finance infrastructure projects, the city had borrowed half a trillion yuan by the end of 2011 – equivalent to half the annual income of the city’s 13 million people.

Much of the financing for these massive projects came from an equally outsized entity: China Development Bank. The world’s largest policy bank, CDB has played an instrumental role in China’s building boom. It has financed domestic infrastructure projects of stunning proportions, from the Three Gorges Dam to China’s West-East Gas Pipeline. It has also ventured abroad, lending in exchange for resources and contracts for Chinese companies around the globe.

Henry Sanderson and Michael Forsythe, reporters for Bloomberg News in Beijing, offer new insight into the workings of this powerful institution in “China’s Superbank: Debt, Oil and Influence – How China Development Bank is Rewriting the Rules of Finance.” As the authors contend, their book is not just about a bank, but about China’s economic and political rise. “China’s Superbank” examines how CDB has facilitated the country’s economic growth and the success of its top companies, and how it has advanced Chinese power abroad.

As the authors write, “If the Communist Party is God, CDB is its prophet, extending the power of the Chinese state across the globe and cementing its power at home.”

CDB is similar to other development banks around the world in that, in order to speed economic development, it lends to borrowers that other commercial banks would typically ignore. But the Chinese policy bank also has significant differences with its counterparts abroad. First, CDB’s size and financial resources set it apart: Its loan book dwarfs even that of the World Bank.

CDB is able to generate vast amounts of capital and offer financing at very low rates because of the country’s system of “financial repression” – China sets artificially low interest rates on bank deposits, meaning that households are paid a negative real rate on their deposits and banks have a steady flow of cheap capital.

CDB does not take deposits directly from China’s savers; instead, it issues bonds to China’s commercial banks. Most of these bonds have maturities of a decade or more, giving CDB the ability to invest in projects that may not generate returns for many years.

CDB is also distinctive in that it espouses a unique mix of state and free market capitalism. The bank has worked to advance Beijing’s long-term policy directives, in particular financing the “go out” initiative that sent many Chinese state companies abroad for the first time.

However, under the leadership of Governor Chen Yuan, a princeling whose father was one of the Communist Party’s “eight immortals,” the bank also sees profitability as one of its highest goals. After taking over CDB in 1998, Chen transformed the bank from a mere appendage of the State Council, China’s chief administrative body, into a globally competitive financial institution, reducing its ratio of non-performing loans (NPLs) from more than 40% to less than 1% in a decade.

CDB played a vital role in financing the China’s recent infrastructure building boom by lending to local government financing vehicles (LGFV). Local governments have lacked sources of financing since 1994, when they were banned from running deficits in an effort to clean up their mounting debts. But local governments found a way to sidestep these regulations by setting up LGFVs, nominally independent entities that borrowed and spent for them. CDB was instrumental in this process in that it provided LGFVs with the seed money they needed to then issue bonds or approach commercial banks for further loans.

Chen was willing to bet on LGFVs because of his belief in urbanization. In the 1990s, local governments were sitting on an incredibly valuable resource in the form of land, and Chen foresaw that economic growth and urbanization would cause the price of that asset to increase exponentially.

In taking out loans for property development, local governments had practically a sure bet. They could turn huge profits by repossessing land from farmers at a fraction of its market price and then reselling it to eager developers. Nationwide, local governments earned RMB7 trillion from selling land-use rights between 2006 and 2010, according to China’s Land Resource Bureau. In addition, development created a “virtuous cycle,” in which infrastructure construction raised the price of surrounding land, increasing government income and spending power.

So when Western economies began tipping into chaos in late 2008, China turned to this engine of property development to keep its economy going. Beijing announced a massive US$567 billion (RMB4 trillion) stimulus package, equivalent to 12.5% of 2008 GDP. Nationwide, fixed-asset investment grew 28.8% annually in the first quarter of 2009, and new urban construction projects nationwide jumped 87.7% year-on-year.

But because the central government funded only RMB1.18 trillion of the stimulus package, much of the burden came to rest with LGFVs and the Chinese banking system. By the end of 2010, local governments had racked up RMB10.7 trillion of debt, nearly one-third of the country’s GDP, and analysts were predicting NPL rates of over 10% or more for China’s major state-owned banks.

Too much of this investment was embezzled or misdirected. “China’s Superbank” proffers Loudi as an example, a city in Hunan where the stimulus was “akin to dropping cash from the sky.” The city of several million sprouted a 30,000-seat stadium and aquatic center and a local government compound in the style of the White House, complete with domed arches and colonnaded facades.

The book offers an interesting look at how these projects were financed. The stadium was partially funded by a bond issuance, in which the LGFV used 18 tracts of land valued at US$1.5 million an acre were used as collateral. This was roughly the same price as an acre of land adjoining a pricy golf course in Winnetka, Illinois, where average family income is US$250,000 a year – compared to US$2,323 in Loudi. But the appraiser was happy to rubber-stamp this ridiculous figure, probably because it shared an office as the city government’s land bureau.

These types of frauds have left China’s banks (and by extension the government) potentially on the hook for massive amounts of money. By analyzing bond prospectuses around China, Forsythe and Sanderson conclude that at least RMB10.7 trillion was lent since 2009 “on shaky or nonexistent collateral to companies that often have cash flows running at a trickle.”

Meet “the handmaiden of state capitalism”

CDB’s other duty is serving as China’s face abroad – a business that is no less original in its practices or awesome in its scale than the bank’s domestic activities. Since the financial crisis, the bank has stepped up its loan programs around the world in a bid to secure low-priced resources. CDB now lends to more developing countries than the World Bank, and for many countries it has eclipsed Western institutions as their biggest lender.

I
n Africa, China is known for issuing loans in return for commodity and resource contracts through the China-Africa Development Fund (CADF). After Ghana discovered oil off its coast, CDB inked a US$3 billion loan with the country, the biggest loan in Ghana’s history and 8% of its 2011 GDP. Oil-rich Venezuela has become the recipient of a third of CDB’s overseas lending – US$40 billion and counting – or about US$1,400 for every man, woman and child in the country.

Most Western investors would eschew these countries as far too risky. By early 2012, for example, CADF had failed to raise any money from outside investors because of the risks of investing in Africa. Venezuela in particular has a dismal credit rating, after defaulting on its loans four times in the last 30 years and nationalizing its oil industry in 2007.

But CDB believes it has worked out an effective system to minimize its risk. In Venezuela and Ghana, the loans are collateralized by future revenues from the sale of oil – essentially giving China a claim on future oil shipments.

CDB’s loans to developing countries are also successful in part because of the bank’s practice of issuing a package of complementary loans. In the Congo in March 2011, for example, the bank signed contracts to build out road and rail networks as well as deals in the mining, energy, agriculture and manufacturing industries. If one project failed, the others would subsidize it, and these infrastructure loans created the conditions for manufacturing and other ventures to succeed.

CDB also uses its contracts to create new markets for state-run companies. In Africa, Chinese carmaker Chery Auto has set up new factories, Huawei is building telecom networks, and Sinohydro Group is constructing power facilities. Venezuela has bought phone networks from ZTE, railroads from CITIC, and oil refineries and pipelines from CNPC and Sinopec. Chinese companies are fond of describing their strategies as “win-win” situations, but this arrangement truly allows China to win twice, the authors write. Beijing secures oil and other resources through its loans, while its state-owned companies win business.

However, CDB still faces a significant risk of default from these countries. After having so recently gone through its own economic transformation, Beijing clearly believes in the power of investment to stimulate growth. But, as the authors write, some parties in democratic Ghana are already opposing China’s presence, and there’s no guarantee that a post-Chavez Venezuela will honor its loan obligations.

“China’s Superbank” alternately paints CDB’s business as ingenious and terrifying. The bank has been instrumental in forging one of history’s greatest growth booms and elevating China to its strongest position globally since the height of the Qing dynasty. It has developed innovative methods of lending and transformed itself into a highly competitive and profitable business.

But its loan book also leaves it vulnerable to defaults both domestically and abroad, whether from the falling price of Chinese real estate or political shifts halfway around the globe. The Chinese banking system now has trillions of yuan in projects of questionable economic value. But because of CDB’s lack of transparency, the extent of its vulnerability to default is unknown.

Evaluating CDB’s performance objectively is made even more difficult because its rise coincides with a dramatic failure of Western market capitalism. Many in the West cannot look at CDB without seeing a mirror image of their own decline. Perhaps CDB’s success is emblematic of the shifting locus of global power. But given the bank’s ostensible vulnerabilities, this assumption deserves re-examining.

“China’s Superbank” is a good place to start. Unlike many China books today, the book breaks new ground on a subject that is both crucially important and barely understood in the West. This insight was hard-won: The authors poured through piles of bond prospectuses and stalked CDB employees outside of restrooms to obtain material on this opaque institution.

Readers without a financial background may find some parts of “China’s Superbank” difficult to understand, such as the chapter that details local government financing and bond issues. But they will still likely walk away from the book with a greatly improved understanding of the bank, as well as China’s system of domestic financing and its business deals abroad.

Going forward, far more could be written about the sustainability of CDB’s model. In essence, CDB has channeled money from China’s savers into stadiums in Changsha, ostentatious government buildings in Dongbei and infrastructure in Ethiopia. How long can this system last?