Home Markets No use selling over soured milk 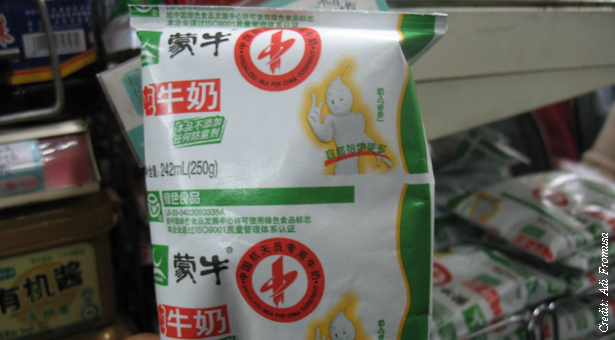 No use selling over soured milk

What does it take for a dairy company to recover from a deadly food safety scandal? The answer is partnerships with foreign food companies. France’s Danone Group (BN.EPA, DNN.BIT, DAN.SWX), one of the world’s biggest yogurt producers, announced on Monday that it will invest US$417 million in China Mengniu (2319.HKG). The deal sent Mengniu shares soaring 11.4% to a 17-month high. Mengniu, a household name in China, has been reaching out for help from foreign brands after the company was rocked by several food safety scandals in recent years. In the most infamous case, tainted Mengniu killed six infants died and hospitalized 300,000. In 2011, the company reported a net loss of US$149.6 million. Last December, cancer-causing agents popped up in its boxed milk products, although the company said the cartons never reached the shelves. “They’re had some incidents in the past … So partnering with with a company like Danone, from the perspective of reputation, certainly will be of help,” said Tracy Dan, a food and beverage analyst at investment holding company First Shanghai in Shenzhen. The deal could have long-term implications for the share price, she added. Investing in Chinese food companies can be risky, given the overall food safety record in China. Investing in one with a dismal record seems dangerous. However, now could be the time to jump in on Mengniu with Danone putting its reputation on the line in exchange for a share of China.

When Goldman Sachs Group (GS.NYSE) makes a bet on a stock, it usually has a very good reason. So when word leaked out Monday that Goldman finally sold off the last of its stake in Industrial and Commercial Bank of China (ICBC; 601398.SHA, 1398.HKG), other investors reacted. The stock has fallen nearly 5% this week, as of late Thursday in Hong Kong. Investors shouldn’t overreact though. “It may impact market sentiment for a couple days, but beyond a week I don’t think it will have any impact,” said one analyst, who was not authorized to speak to the media. Goldman was actually selling a very small portion of ICBC as it has gradually unloaded its original 5% stake over the course of six sales. The US$1.1 billion sale this week is a drop in the bucket compared to ICBC’s nearly US$1.9 trillion in market cap. The outlook for China’s largest bank remains the same: Profit margins will still slowly decline as the financial system is reformed, but it will remain one of the most profitable banks in the world for some time. It’s additionally one of the safer banking plays as ICBC has historically taken a conservative approach that made for a strong balance sheet even if it did not maximize concerns. While pace of future reforms is nearly impossible to predict, ICBC remains a strong play for now.

The lighter side of heavy equipment

China’s economic data is not boding well for its heavy machinery industry. Fixed-asset investment slowed in April, falling below the average for the first quarter of the year. The HSBC Purchasing Managers Index fell below 50 on Thursday, indicating that manufacturing growth is contracting. The figures are reflected at companies such as Zoomlion (000157.SHA, 1157.HKG) and Sany Heavy Equipment International Holdings (0631.HKG). Lackluster investment in coal mining will set the stage for poor performance for Sany this year. Sales of concrete machinery are also down and should stay that way, hurting Zoomlion. But one company that could perform for investors this year is Lonking Holdings (3339.HKG). The firm makes loaders and excavators, one of the first segments of the heavy equipment market to get hit by slower growth in China, said Vik Chopra, an analyst at Sun Hung Kai Financial. That means companies began getting rid of their stock of that type of machinery about two years ago, compared to the much more recent hit to concrete equipment, which has been destocking for only about eight months. “We think there’s still a lot more pain to be coming through on the concrete machinery side,” Chopra said. “Whereas a lot of the pain has already been absorbed into the market on the loader/excavator side.” In April, loaders and excavators saw positive growth in sales for the first time in two years. Sun Hung Kai says Lonking stock is priced at a 40% discount compared to similar companies and could rise by 30%. Poor economic performance might be heavy on investors minds, but they should pay attention to this brighter niche in the market.

The debut of China Galaxy Securities’ shares was delayed by a few hours on Wednesday, thanks to an intense rainstorm that prevented the Hong Kong Stock Exchange from opening – a bad omen if ever there was. But the financial firm’s stock popped nevertheless, rising 6% in its first day of trading. Sinopec Engineering Group, by contrast, sank with its new shares fell nearly half a percent coming out of the gate on Thursday. Jasper Chan, a senior corporate finance officer at Phillips Securities in Hong Kong, attributes the differing performance to overall market sentiment: The Hang Seng Index held relatively steady the day that China Galaxy debuted and sank the day Sinopec Engineering floated. IPOs will remain beholden to overall sentiment, Chan said, and that’s not a good sign. With concerns over China slowing down and an improving Japanese economy siphoning away some investment in Hong Kong, sentiment may be poor for some time to come.