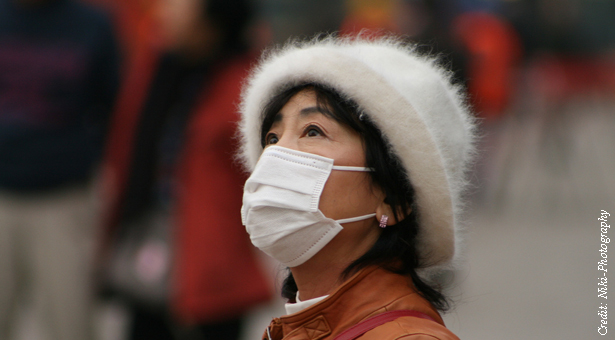 The new strain of avian flu virus, known as H7N9, might send sparrows spiraling from the sky, but it’s also knocking down airline shares in Hong Kong. The stock price for the country’s biggest domestic carrier, China Southern Airlines (ZNH.NYSE, 600029.SH, 1055.HKG), plummeted the most in a year as news of flu cases, and deaths, in the Yangtze River Delta spread late last week. The Bloomberg Asia Pacific Airlines Index dropped the most since May. As of Thursday, 33 cases had been reported and 9 people had died. “The number we look to is the number of infected people, and over the week we didn’t see a sharp increase in the number of infections,” said Patrick Xu, a Barclays transportation analyst. As long as that number stays low, investors should be safe from the flu fallout. The outbreak is a welcome distraction from poor earnings reports. China Southern had a disappointing start to the year, with growth in revenue per passenger per kilometer (a big deal in the airlines industry) falling below last year’s mark during the first two months of 2013, Barclays noted in a report on Monday. Air China (AIRC.LON, 601111.SHA, 0753.HKG) has seen a similar revenue trajectory. These poor earnings look set to continue in the first half of the year – virus or no virus. Investors should make like healthy birds and migrate.

Normally major swings in stock prices are linked to major corporate news but not so with Baidu.com (BIDU.NASDAQ, B1C.FRA) this week. The company’s shares surged to US$90.07 in New York on Wednesday, up 6% from the previous day’s close. But why? The Nasdaq increased nearly 2% and surely that helped. The rise also coincided with Beijing-headquartered equity analysis firm 86Research’s upgrade of the stock to buy from hold. Regardless of why Baidu’s shares popped, investors may want to be cautious about buying in now. Baidu already dominates Chinese internet searches with around 80% market share, leaving little room for further gains, said Jin K. Yoon, an analyst with Nomura International in Hong Kong. While investors might question this move in the short-term, the strategy will likely pay off later, as was the case with Google expanding beyond its vice grip on the US search market, said Yoon, who has a buy rating on Baidu. Patient investors might consider buying and holding until these long-term bets start translating into returns.

Bird flu’s impact on stocks may seem thoroughly picked over this week, but one more potential play deserves noting, just for how purely speculative it is. Minggao Shen, head of China Research at Citi, suggested in a note on Monday that the health care and auto sectors could stand to benefit from the avian virus. The health care link to the flu is obvious enough, but autos seem to be a bit more of a stretch. Elaborating in an interview with CER, Shen said that SARS did indeed boost auto sales back in 2003 as more people bought cars to avoid public transit. Investors might expect the same from bird flu, he said, but only if it’s discovered to be transmitted person-to-person. In other words, time to dust off those doctorates in virology and make a bet. For normal investors who can’t predict viral pathology, however, Shen is bullish on the overall auto sector, although declined to name specific companies because of company policies. “In general in the auto sector in the past couple of years, demand was slow and recently it started to pick up,” he said. “Another issue is that, of course, the auto sector is oversupplied, but the China-Japan tension basically cut the production capacity of Japanese carmakers. So this also favors non-Japanese brand names in general.”

There’s still not much to see in terms of China-related IPOs with the mainland stalled and little in the pipeline for Hong Kong. Zebra Strategic Holdings (8260.HKG) performed well on its debut Wednesday, but as previously noted, the company’s mainland connections are tenuous.