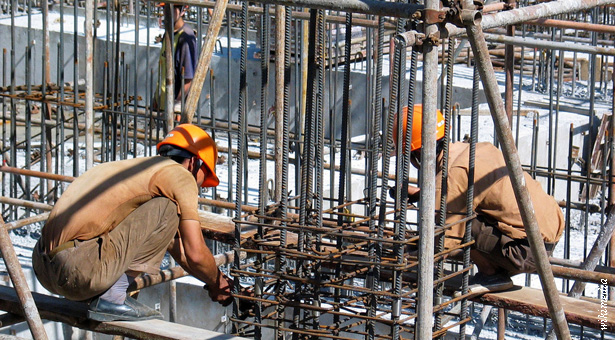 If they have been, the cadres might face a trial by fire at the end of the month. The National Development and Reform Commission (NDRC) said it’s conducting a thorough inspection of the bonds issued by the construction companies that build the houses and will “leave no corner unturned” in a hunt for misused funds. Local governments control these financing platforms.

The political well-being of corrupt officials aside, widespread embezzling of subsidized housing funds could put at risk one of the central government’s most highly prioritized initiatives. The massive plan to build 36 million units of the cheap housing is one of the country’s largest infrastructure rollouts. That plan, integral to the country’s greater urbanization, could be compromised if the NDRC turns up massive misappropriations.

China’s 12th Five-Year Plan pushed graders and cement layers into motion on endless tracts of subsidized housing in 2011. The small subsidized apartments, what the Chinese government calls “guaranteed housing,” are scheduled to be finished by 2016.

These affordable housing units are a major factor in convincing rural dwellers to relocate to the city. The government wants to encourage this continued migration to cities to further drive economic growth, and a master plan for urbanization is expected to be issued in the first half of the year. With housing prices rising rapidly with the economic boom, urban apartments are often too expensive for farmers and subsidized housing may make the difference between whether they stay in the countryside or integrate into the city.

Former Premier Wen Jiabao was a major proponent of building the vast number of cheaper homes, and China’s new Premier Li Keqiang has picked up where Wen left off. Li is often quoted in state media, instructing the quicker build out of guaranteed houses or simply reaffirming the huge commitment.

The commitment has an equally sizable price tag. During the five-year planning period, some US226.6 billion (RMB1.4 trillion) is expected to be pumped into the plan. Local governments are responsible for raising lots of this cash by issuing bonds – the same ones now under the scrutiny of the central government. During 2011 and 2012, the companies building the subsidized housing issued RMB235 billion in bonds.

The figures can be worrisome when local financing platforms are given a closer look. It’s clear that governments in cities and towns have made a bad habit of using land as collateral to get unrealistic loans from state banks. A report from Standard Chartered in March noted that local governments often do this with land that they haven’t even appropriated yet. It’s risks such as these that contributed to Fitch downgrading China’s local credit rating earlier this month.

The NDRC inspection is needed – and hopefully not too late. Guaranteed housing looks to be on track. The government says 4.7 million units will be completed this year and construction will start on another 6.3 million. The NDRC can only hope it doesn’t come across cases of corruption that put the future of this plan at risk.

Local officials no doubt stand to benefit less on the sales of guaranteed housing than normal housing developments. For those inclined to dip into the public coffers for personal use, subsidized housing might force cadres to stick their hands a bit deeper into the pot, cutting corners and skimping on building materials. Or to wrongly use bond issuances when raising funds.

It’s not just the possibility of defaulting on improperly issued debt that is at risk here. China’s urbanization plan, and thus its economic future, is also at risk. The build-out of cheap housing units will help drive migration toward cities and towns – areas where new residents will engage in higher-value business, and where it’s hoped they will consume more.

The NDRC is correct to police bond issuances and should go further to improve oversight in the localities that are quickly becoming China’s greatest financial risk. Stifling the urbanization process that starts on the farm and ends in the city would potentially have long-lasting effects on China’s growth and the future of domestic consumption. Where offenses are found, the authorities should come down swiftly on offenders, who might make cheap housing look a whole lot more expensive.