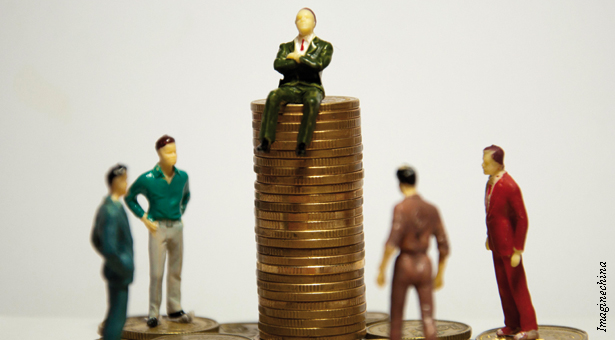 Wendy, a 28-year-old Shanghainese attorney who practices Chinese law, started scaling the corporate ladder at the Shanghai branch of a top ten British law firm three years ago. At first, she was pleased with the pay, which was higher than local firms offered.

Last year, the partners promoted her to a level 7 (out of 12) under the firm’s internal metric, which determines scope of work and the hourly charge for that lawyer’s time. Shortly after, she discovered that a level 7 UK-qualified lawyer working in the same office was paid twice her salary and given more annual leave and better health insurance

Incensed, Wendy complained to management about the unfair treatment. Her boss told her that even though she brought in as much money as the other lawyer and her work was rated to be of equal quality, the value of her Chinese qualification was less than that of the UK-qualified associate.

In China, far from the prying eyes of their home offices, Western firms such as the partnership that employed Wendy, often engage in discriminatory practices. Chinese nationals have nevertheless flocked to such firms since they started setting up shop in 1979. These firms attract Chinese talent because they offer higher pay than local rivals, even though they treat foreign staff preferentially.

Some Chinese have found that their enthusiasm wanes upon discovering this inequity.  But these employees have little recourse: Although Chinese law espouses equal pay for equal work, China has little legal precedent for enforcing such measures. And foreign firms take morally dubious measures to prevent cases against them from coming to light.

To sue or not to sue

It is not just law firms that are guilty of discrimination. More than 80% of Chinese workers surveyed in 70 multinational companies in key cities in China said that foreign companies discriminate against their Chinese staff, according to a 2007 survey by Guangdong Provincial Situation Survey and Research Center.

The equal pay for equal work does exist as a principle in Chinese law, Tsang said. Chinese labor law states that workers “shall not be discriminated against in employment due to their nationality, race, sex or religious belief.” But the state does not provide judges with guidelines on how to interpret the law. And the low level of compensation awarded in such cases means that victims of discrimination weighing the expense of lawyers often do not bring complaints to court, said Kaichang Zhou, an employment law partner at Hui Ye Law Firm.

The Chinese government has done far less than many Western countries to combat discrimination in the workplace. In the US, the importance the government places on work place equality is palpable. The country set up a federal authority called the Equal Employment Opportunities Commission, which investigates allegations of employment discrimination, oversees mediation and provides advice to victims of prejudicial treatment. Without such bodies in China, the law remains accessible to only a few.

Chinese employees also rarely complain about being discriminated against by their foreign bosses. Foreign firms do offer perks, such as a global experience or level of training, which many local companies cannot compete with. “My salary was one- tenth of the salaries of foreign lawyers. I was thankful for the opportunity. It was only through the experience they provided me that I was able to grow,” said Tsang of his early legal career when he worked in a foreign firm. The foreign firm Tsang trained at provided him with exposure to an international client base and access to a comprehensive training system, which local companies could not provide at that point.

A culture of prejudice

Experience isn’t the only benefit Chinese reap from foreign firms; some also enjoy the culture. “The culture is more relaxed … you feel like your position relative to your boss is more equal,” said Wendy, the lawyer with the British firm. “[At a multinational] you feel like there is a global system in place … So internal management is more systematic.”

In addition, foreign firms often pay more than local rivals – a crucial reason why they can discriminate against Chinese workers, yet still attract them. When Wendy and Tsang were deciding between foreign and local firms, in each case the clincher was the Western company’s offer of a higher salary, even if that’s still far less than what is offered equivalent foreign employees.

Also, foreign firms take measures to conceal their discrimination. The employment contract at Wendy’s firm forbade British lawyers from discussing their salary and benefits with co-workers, a provision that would be illegal in the US. This makes it hard for disillusioned employees such as Wendy to collect evidence that their employer has treated them unequally.

Highlighting only the prejudicial practices of foreign firms, however, overlooks that Chinese firms are often guilty of the same behavior. Chinese bosses often discriminate according to age, physical appearance, height and disability, Professor Zhou Wei at Sichuan University Law School writes in his book “Employment Discrimination in China: Legislation and Reality.”  .

Widespread prejudicial practices mean that Chinese workers may not even feel a sense of injustice when discriminated against or see the need to correct such behavior. A 2006-2007 survey by the China University of Political Science and Law found that 85.5% of workers felt they had experienced discrimination or observed it happening to someone else. But of 3,454 workers in 10 major Chinese cities in the survey, only 50.5% of those that had seen or experienced discrimination considered it a serious problem.

Despite the widespread acceptance of discriminatory behavior in both local and foreign firms, Chinese are gradually adopting the idea of equal pay for equal work.

Chinese employees are increasingly questioning their conditions relative to foreign workers and protesting for fair treatment. In 2010, several hundred factory workers at a  Honda plant in Guangdong province went on strike to protest their low monthly wage of US$194.70. Workers grew angry when they discovered that 20-year-old Japanese administrative assistants working in the same site made US$8,039 a month, roughly forty times that of the Chinese factory workers. In addition, the Japanese workers received free housing, food and a stipend of US$300 a day. Management settled the two week strike by raising the factory workers salaries by 24%.

Although overseas students only make up a tiny proportion of the nation’s workforce, their adopted notions of fair treatment will seep into mainland practices over time. In the Beijing branch of Wendy’s British law firm, Chinese nationals that studied abroad banded together with those that hadn’t and complained about their unequal treatment to the management. In support of their complaint, the group gave the example that US firms in Britain pay US- and British-qualified lawyers equally. As a result the firm increased annual leave from 20 to 22 days for Chinese nationals, closer to the 25-day allowance for foreign lawyers, and improved the quality of health insurance.

But the fastest driver of equality for white-collar workers will be the rise of Chinese companies. As local firms expand domestically and globally, they will be able to offer higher salaries, exposure to international clients and better training. This will make t
hem more attractive to Chinese talent, so foreign firms will have to up the ante to compete for the most accomplished. Foreign firms will have to increase salaries and make sure that Chinese hires know they are valued – or their Chinese workers will leave in droves to seek a fair price for their labor.

In every country, the erosion of prejudice has been a gradual process. Chinese employed in foreign firms will have to wait, likely for years,  before they see any significant change. But Wendy was done with waiting. Last month, she decided that she no longer wanted to be a second-class employee. She left the British law firm and is now enjoying a fair price for her labor at a local one.