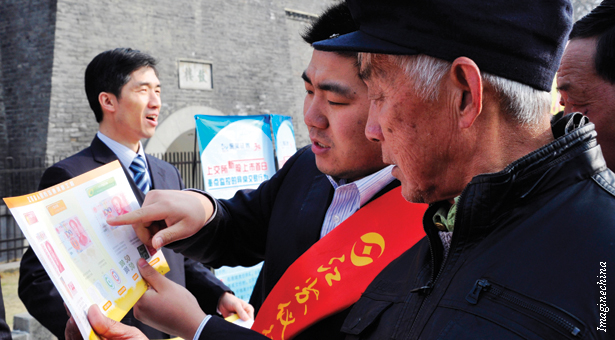 China bets on privatization to save village banks

After eluding police for 10 days last year, a dragnet in central China’s Henan province finally closed in on Li Mingzhong, the head of a BOC Fullerton Community Bank branch who had absconded with more than US$16 million in rural investor funds.

In mid-2012, Li mismanaged millions of yuan in bank deposits by investing in a faulty ceramic tile producer, according to state-run Xinhua News Agency. Among a number of bad practices, the banker lent to friends without collateral and borrowed from shadow banks at usurious interest rates, leading to mounting non-performing loans.

Before the bank collapsed, Li ran. Now he could face the death penalty.

The case isn’t isolated. Stories of outlandishly poor and unqualified management at village and town banks have circulated in Chinese media since 2006, when the government first allowed private capital to enter the sector.

On July 5, the State Council, China’s cabinet, said it would promote greater private ownership in the country’s smallest banks. It also said it would launch a trial that would allow private corporations to set up small banks – a first for a country that still refers to itself as communist.

The measure was a bold move for an industry thoroughly dominated by government-backed institutions. Experts said unleashing private capital at the village level could clear out a contagious banking culture spreading from state banks. It also shows the state’s willingness to push on with piecemeal but targeted reform.

“[The latest reform] is substantial because it’s quite detailed on how private capital can get involved,” said Oliver Rui, a professor of finance at China European International Business School (CEIBS) in Shanghai.

Some analysts, however, said the reform could get stuck on the low rung that it starts on.

The village and town banking sector is already more than 70% privately owned. But that figure can be misleading in understanding how the banks are controlled. Existing state banks must hold the controlling, but not necessarily majority, stake in all small banks. Private shareholders are small corporations and hold non-controlling stakes.

The new measures from Beijing would put an end to that required state control – at least on the village level.

When the government first let private capital enter villages and towns in 2006, it had grand expansion plans for the banks. The China Banking Regulatory Commission (CBRC) sought to establish more than 1,000 of them within the first three years.

But the privatized versions of the country’s smallest banks got off to a rough start. Seven years later, the number of active banks is only about 830 with an accumulated total capital of only US$7.4 billion and a loan balance of US$4.3 billion.

Industry insiders said the tight connection to the state banks that control them have led to bad practices and a lack of competition.

A number of irregularities have been reported at BOC Fullerton Community Bank, the chain of banks where now-detained Li Mingzhong had worked.

The village and town bank is a joint venture between Bank of China and a subsidiary of Singapore’s sovereign wealth fund Temasek Holding. A report on business news site China Finance Net said the banks had “copied the risk-control system of the mother bank,” Bank of China, leading to a level of financial stress unsustainable for a small financial institution.

The bank chain had also reportedly hired loan officers with only two months of training.

“By nature, you get people with a traditional banker mentality and relationships on the loan and deposit side,” Wu said. “What you need is more local private capital at the shareholder and board member [level] making the decisions. [People] who know the community, and are willing to differentiate and innovate.”

Rui at CEIBS agreed that giving local talent at the banks more command over operations could boost competitiveness.

“They’re aggressive when it comes to taking risks. In other words, they can provide better service to the SMEs,” he said. “The bank managers and loan officers have a better understanding of the market and the community.”

Getting capital to SMEs is likely the main purpose of the trial, not greater banking sector reform, said Liao Qiang, director of financial institutions ratings at Standard & Poor’s in Beijing. As a side effect, it may also boost the profitability of small banks as they go after higher risk, higher return SMEs and must learn to better price in risk without the safety net of state ownership.

The move should not be interpreted as a sign that similar deregulation will come  to China’s financial system as a whole any time soon, Liao said. Competition for capital in China’s banking sector is already intense and introducing privatization at mid-sized banks could limit the institutions’ capacity to absorb bad loans.

Privatized banks on the village and town level should not greatly impede regulators’ ability to control the market.

“We are talking about very small institutions, so the downside could be well managed,” Liao said. “That’s why the regulators are more comfortable to start this scheme in villages and towns.”

There’s little hope of the regulations spreading to the higher reaches of the banking industry in the near future. For regulators reticent to give up control of the banking system, allowing wider privatization will likely prove too excruciating.