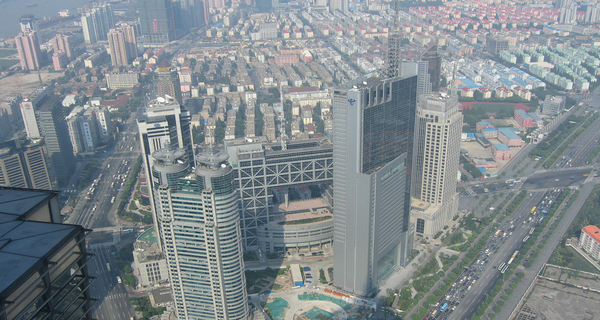 Shanghai’s new tech board might perform better than previous attempts

President Xi Jinping announced in November 2018 that the Shanghai Stock Exchange will establish an innovation and technology equity board. No exact launch date appears to have been provided to the public. The new board represents a renewed attempt to turn stock markets into a catalyst for technological innovation. By improving smaller companies’ access to capital, the new board is intended to help put capital into the hands of companies who have promising new business models or technology.

Whether the tech board can help to effectively accomplish this goal is far from certain. Other tech boards previously launched have been underperforming the market for years. Characteristics of the market are unfavorable for the shares of smaller idiosyncratic firms, but recent developments address some of these problems. There is reason to be optimistic about the new board.

The new board could address several government goals at once

Recent documents related to the Made in China 2025 industrial upgrading plan highlight innovative businesses’ role in the future of the Chinese economy. Providing these companies with enough financial support and sharing their profits with the domestic market is becoming a policy priority. According to some reports China now has more unicorns than the US. But more favorable conditions outside the country often lead to these companies choosing to list abroad or in Hong Kong where most Chinese cannot benefit from their success.

The Chinese government likely hopes the board will also attract existing tech giants to list their shares there. Attempts to bring the shares of Chinese tech companies listed abroad such as Alibaba and Xiaomi home to the domestic market have been unsuccessful. A report co-authored by CICC states that the board is expected to attract a larger number of overseas stocks. As CICC is majority government owned the report’s predictions might give a window to the government’s hopes for the board.

Beijing has drafted special rules designed to make the board an attractive place for companies to list. The rules clearly favour start-ups. It allows companies which have not yet become profitable to list; the listing process will be faster; companies with weighted voting rights will be accepted (this corporate structure typically puts more power in the hands of founders); and more price movements are to be tolerated. Additionally, the launch of the board will likely be covered closely and favourably by the state media. This should lead to large amounts of capital being raised in the first round of IPOs.

Shenzhen’s ChiNext tech board which was launched in 2010 had similar goals as the new tech board. Initially, ChiNext performed extremely well, between 2010 and 2015 the value of the index quadrupled. It then crashed and stabilized at a lower level. In recent years it has underperformed the market. The amount of capital raised has been declining, and the number of IPOs has likewise fallen. 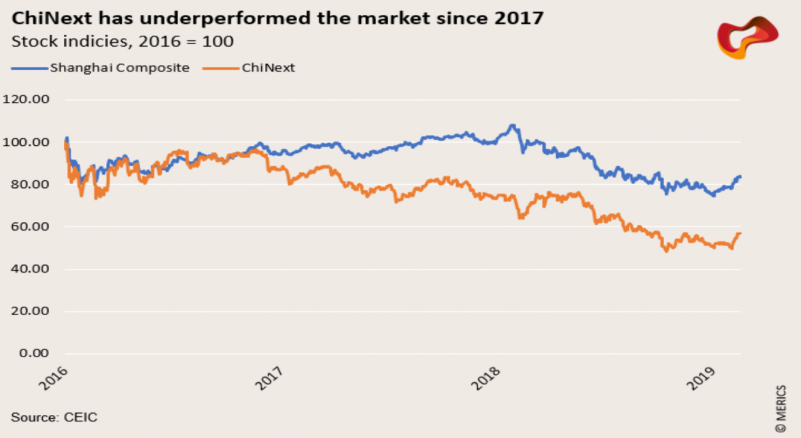 ChiNext’s initial performance looked very much like a bubble, a common phenomenon in China’s financial markets (see a MERICS blog on the topic here). Once stock prices left bubble territory performance deteriorated. ChiNext has underperformed the Shanghai Stock Exchange since 2017. There is more than one likely reason why this is the case.

One problem faced by the kind of smaller firms which might list on a tech board is poor access to credit as state banks generally prefer lending to SOEs. This problem has been covered extensively (for example by me here).

A lesser known problem is Stock Price Synchronicity, when stock prices move together. This phenomenon, caused primarily by a lack of reliable firm-specific information, is common in emerging markets. The most cited scientific study on the topic found that 80 percent of Chinese stocks move together in a given week (compared to 56 percent in the US).

This following example illustrates how this phenomenon can distort the market, and hurt the performance of companies with unique business models:

Imagine a skilled investor who is considering buying shares in a company which is developing industrial robots. Despite being very different from most listed companies the share price of this company will, because of stock price synchronicity, often move in a similar way. The investor would, however, still bear the risk of losing his entire investment. This could happen if, for example, it was discovered that company’s robots did not work, causing it to go out of business. While the returns are distorted, the risk of losing everything is the same. Under these circumstances the investor might decide to buy into a fund which tracks the market instead. The returns on his investment would often be similar, but without the risk of losing the whole investment.

Scale this example up to the whole market, and it becomes clear how stock price synchronicity can cause investors to systematically avoid risky stocks, contributing to them underperforming the market.

Several developments make it likely the new board will perform better than ChiNext:

Firstly, as mentioned in the first part of this piece, new rules will improve the listing progress.

Secondly, increasing foreign investment can help address stock price synchronicity. Research shows that the stock price of companies with large degrees of foreign ownership is more closely related to fundamentals and less driven by the market.  This is likely because foreign ownership leads to a greater number of independent analysts covering the stock. China’s inclusion into the MSCI index and the establishment of the stock connect programs are examples of recent changes which will attract more foreign investment.

Finally, the government is pressuring banks to lend more to the private sector, this should also help the performance of stocks on the new board.

It would be surprising if Shanghai’s New Tech Board did not at least have a good start. Chinese investors have limited investment options, so the new board will be welcomed. Additionally, the government is guaranteed to lend a hand with promotion. At the very least a few impressive companies should make the board their home. However, there is a large risk that an initial stampede of investors could cause stock price overvaluations and subsequent crashes.

Max Karnfelt is an economic analyst at the Mercator Institute for China Studies (MERICS). Follow him on Twitter at @max_karnfelt.