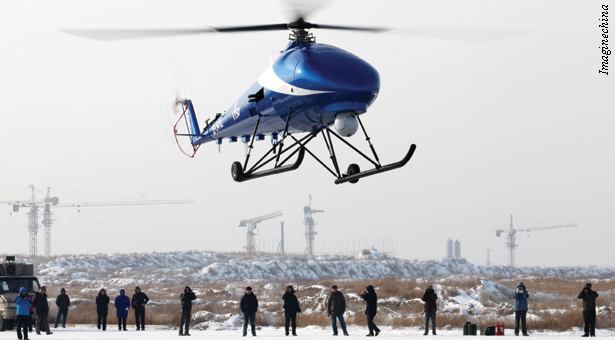 The first time Cao Xintian lifted into the sky in 2009, his heart was pounding. At the time, Cao was one of few Chinese civilians to learn how to fly a helicopter. He said the training, which can take as little as two months, was surprisingly easy.

“Not difficult,” Cao said. “I think anyone can learn to fly one.”

Chinese are now reportedly lining up for lessons in Shanghai’s Pudong district. In the latter half of 2012, Shanghai Heli General Aviation opened a helicopter training school in partnership with Shanghai Sikorsky Aircraft, where Cao is the sales manager. The company started marketing Sikorsky helicopters in 2003 and has since sold 60 of the US$250,000 flying machines to wealthy entrepreneurs and the rare Chinese aviation enthusiast.

The company has big plans. Shanghai Heli’s General Manager Wu Dan says he’s preparing to open hangers and other training centers across China’s eastern seaboard in response to signs that the government is lifting controls on the general aviation industry.

“We are going to go big,” General Manager Wu Dan said from a conference room overlooking the small, dormant airfield the company uses to teach Chinese how to maneuver the S300-C, the small model of helicopter it sells. “The potential is huge. The Chinese economy has grown tremendously in the last 30 year, but general aviation hasn’t kept up.”

It’s no mystery why general aviation, which includes private and business aircrafts and services, is so far behind China’s rocket-fueled economy. The military’s tight hold on low-altitude airspace has almost completely subdued the use of private planes and helicopters – until recently, that is.

Reforms in the way of experimental flight zones have made quick progress during the past three years, and investment is building up around the industry. By some accounts, up to one-third of low-altitude airspace is already open to private aircraft. The attention from stakeholders is now on the government and military’s commitment to granting full access to space below 1,000 meters. Some experts said they are skeptical about the military’s intention of letting that happen.

The clearance to fly helicopters within Shanghai’s city limits represents a major change in the way China regulates its skies. Before 2010, few civilian pilots had operated private aircraft in China.

In 2010, Ma Xin, deputy director of Civil Air Administration China, was quoted as saying general aviation airspace would be completely opened by 2015. Pockets of experimental airspace, where small aircraft can fly freely, have appeared since then.

Investments such as Shanghai Heli’s training school have followed the government promises and a value chain of business is forming around private aviation, according to Wu. Zhuhai, Guangdong, where the government first loosened industry regulations, has soaked up investments from hotels, restaurants and other services in anticipation of further reform, he said.

A 2009 study of China’s general aviation industry from management consulting firm Booz & Co projected that the sector would grow by 20% a year and generate an annual US$1.3 billion in revenue. General aviation in the US was worth US$151 billion in 2011, up to one-third of the country’s entire aviation industry. At the time Booz completed the report, aircraft manufacturers, training schools, maintenance services and fixed-based operators, which provide fuel and hanger space, were already lining up to serve the industry.

Business jet operators have been the biggest winners in the reform so far. The industry, which uses the same high-altitude airspace as airlines, witnessed an unprecedented easing of restrictions last year. In 1995, when the country’s first business jets were allowed to fly, the approval process for a flight took two weeks, said Jason Liao, chairman and CEO of China Business Aviation, a Beijing-based aviation consulting firm. That time was lowered to one day in 2010. Last year, China’s Airspace Commission said flights could take off four hours after applying.

Some 17,000 business jets fly in the US, compared to about 300 in China, Liao said. Demand for the service far outweighs the industry’s current potential. “China’s high net-worth individuals have really amassed a lot of wealth during the past 10 years. Now investors are zooming around the globe, buying up resources everywhere. There is a real need for private business jets,” Liao said.

Given the investment that is reportedly pouring into the sector, coupled with potential demand from China’s new deep-pocketed entrepreneurs and executives, optimism for the industry’s success seems well founded. However, questions still remain over who exactly controls China’s low-altitude airspace – and therefore who has the power to open it.

Patchwork in the sky

Unlike the US, where almost all of the country’s airspace is in the hands of the Federal Aviation Commission, regional military divisions in China control large swaths of the skies where private aircraft would operate, according to Richard Aboulafia, vice president at Teal Group, an aerospace and defense analysis firm. Simply put, there is no cohesive authority that can clear a private plane to move from one area to another.

“There’s a real feeling that certain areas of the country are treated as a private fiefdom. Like so many other things in China, what’s really missing is the rule of law,” Aboulafia said. “Doing experiments sounds great but then you realize that that’s just part of the problem. You’re creating a patchwork of uncertainty.”

Only top-down directives from Beijing that force the military to comply with policy will create the mechanisms for real industry growth. At present, the potential for such bold moves is low, Aboulafia said. Despite the hype, a lack of coherent policy will stymie growth.

Wu at Shanghai Heli acknowledged the risks of investing in a sector that is still waiting for a final phase of reform. Pressure is building to reform certain industry restrictions. Eight helicopter training schools have opened so far, and Wu said that city governments have sold off land to
investors at below market price with the guarantee that they would develop industry-serving aviation enterprises.

If the reform and opening of general aviation was to halt, investors and local governments would take substantial loses. In this sense, Wu says, investors aren’t so much following the opening of the sector as they are pushing it.

“The government, including the military, needs to open up this airspace so that we can get into the air, or else the development of this industry will reach a bottleneck,” he said.