Upping the ante in Macau This from the Financial Times on the intensifying competition in the once-monopolistic casino market in number 2 SAR Macau:

Sheldon Adelson, the Las Vegas casino mogul, on Monday warned Stanley Ho and other gaming operators in Macao that competition in the world’s second largest casino market has only just begun and would intensify.

“If you can’t stand the heat, get out of the kitchen,” said Mr Adelson, chairman and chief executive of Las Vegas Sands.

Visiting the former Portuguese enclave to mark the topping off of his company’s $2.3bn Venetian Macao resort, Mr Adelson was responding to Mr Ho’s complaints earlier this month that the Las Vegas Sands’ first operation there – the Sands Macao – was squeezing his casinos. …
Las Vegas Sands, the first foreign investor to enter Macao’s gaming industry in 2004, has transformed the market with the Sands Macao, a world-class casino that appeals to the mass market. The 700-table Venetian Macao, a Las Vegas-style resort, is due to open next summer.

The market share of Sociedade de Jogos de Macau, Mr Ho’s gaming flagship targeted at VIPs, has since fallen from about 85 per cent to 70 per cent. 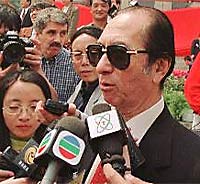 The article refers to Stanley Ho’s (right, 85 years young) complaints of a month ago, which he renewed yesterday, saying that newcomer [American] casino-hotel operators like Adelson and Steve Wynn are receiving favorable treatment. To wit:

A grim Mr Ho said: “I can’t take it lying down. Why do you so favour the Americans? It’s unfair.” He said some US stakeholders in the gaming industry had broken their promise of “peaceful competition” while disregarding Macau’s future.

“At that time they said there would be peaceful competition. We invest in Macau all the money we earn, but you guys [Americans] just take it away.”

The tycoon said some US stakeholders had tried to break his helicopter monopoly – important for bringing in high rollers – but he would not give it up.

He also complained about losing casino staff: “They never trained any staff but took away ours.”

He said the cutthroat competition would hurt the long-term interests of Macau, and even Beijing.

“In the long run, they may take away my business and affect Macau. They may send people to the Legislative Assembly and take control of Macau. It may not be good for Beijing either.”

Casino battle heats up in Macao

A Strip, Yes, But Not The Strip, Wynn Says
Image from www.macaucasinoworld.com, forbes.com