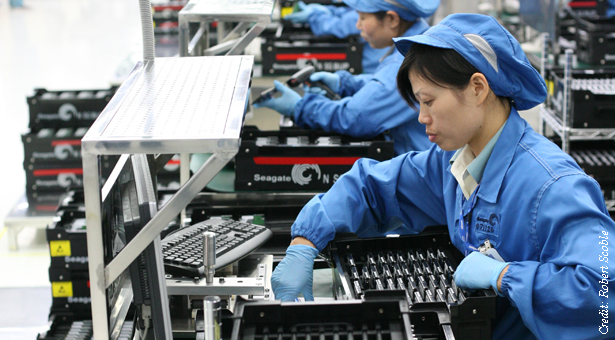 Ivo Naumann and Steve Maurer are managing directors at AlixPartners, a global business advisory firm. Naumann heads the firm’s activities in mainland China, and Maurer leads the firm’s manufacturing practice for the Americas.

It happens regularly in virtually every segment of every industry: A newcomer arrives, offers an advantage that competitors in the segment can’t match and rapidly begins to build both its business and market share.

What often follows, however, is also predictable: The market adapts, the advantage diminishes and the newcomer finds that it is in a vulnerable, rather than valued, situation.

Early in the last decade, China became both the disrupting newcomer in the global manufacturing sector and the attractive, often low-priced, supplier – so much so that in the West “offshoring” became nearly synonymous with “made in China.” Two years ago, however, the sea change toward China began to equalize. In fact, new AlixPartners research reveals that –  according to current trends such as wage inflation in China and exchange rates that impact total landed costs (that is, all aspects of bringing a product to its point-of-sale) – the United States is on track to achieve cost parity with China as a base for manufacturing operations by 2015. In other words, on average, manufacturing an item in the US to be sold there will cost the same amount as manufacturing it in China and shipping it back to the US.

The problems with cost parity

When companies in one country can offer the kind of significantly lower manufacturing costs that China has been able to provide, a number of issues are often overlooked as “the cost of doing business.” For US companies doing business with China, those issues include having to deal with a long supply chain, the need to often carry more inventory and the risk of obsolescence when a product takes a month or longer to be shipped across the ocean.

Cost parity between China and the US would change that dynamic dramatically. It makes corporate decision makers question where it is best to invest – and do business – in the future.

It’s already shifting executive attitudes. AlixPartners also recently conducted a survey of 137 top manufacturing executives in the US across a wide range of more than 10 different industries. Overall, 84% said the decision to “nearshore” (in other words, source from the Americas) is important to their respective companies, up from 53% in last year’s survey. Nearly half of those surveyed view nearshoring as an opportunity, and 90% of that amount either have nearshored or expect to nearshore in the next two to three years.

There are two important lessons to be drawn from this research: One for US companies considering a shift from offshoring in China to nearshoring in, for instance, Mexico and another for Chinese companies looking to remain competitive when low wages is no longer the main driver.

For US companies, look before you leap

For companies considering nearshoring, the most attractive advantages are generally lower freight costs and the ability to move products to market faster. Perhaps the most eye-opening news from our recent survey is that executives said the US is an equally attractive location for nearshoring as Mexico is.

There is, however, a significant caveat when interpreting this research: Average statistics for industries or manufacturing overall should not be applied blindly when making specific decisions. Instead, a full analysis must be done of the product type, location, transportation and other variables affecting total landed costs, including duties and the expense of inventory in transit.

Assuming that all instances will adhere to industry-wide statistics when making decisions regarding products and services illustrates the inherent danger in not “looking before you leap.” Not all products and situations adhere ot the averages. A deeper analysis of the data shows that China still has – and is expected to continue to have – the cost advantage in items such as machined aluminium parts, plastic molded parts, non-denim slacks and knit apparel, to name a few.

Other factors to consider before making manufacturing changes include those inherent in switching sources of manufacturing, such as the capital hurdles involved in tooling and transition, exchange rates and regulatory approvals. China, for its part, still has many advantages it can hone to counter – and perhaps blunt – current trends.

For Chinese companies, more than the price must be right

Low labor costs, combined with a business-friendly regulatory environment and an abundance of both skilled and unskilled workers, have long been a boon to the Chinese economy. In certain areas, Chinese companies are likely to continue to have a cost advantage. In others, however, potential cost parity will lead executives to look at other means of differentiating their business and will force the conversation to shift beyond cost and to the larger issue of overall value.

This is especially significant on the global stage where both India’s rupee and Mexico’s peso have weakened, reducing those countries’ costs relative to both Chinese and US production. AlixPartners research suggests that Chinese companies would do well to quickly institute measures that simultaneously distance themselves from perceptions they are “lowest cost providers” and demonstrate their potential strength higher up the value chain in areas such as manufacturing design support.

To do this, however, requires overcoming the reservations that many US companies have about sharing trade secrets and intellectual property with Chinese companies. Even the most ethical Chinese companies will need to overcompensate when protecting customer proprietary data to overcome the reputation that many Chinese companies have for unscrupulously copying parts and products. To do so will take time, which is why the need to take the next step and become a valued supplier partner cannot start too soon.