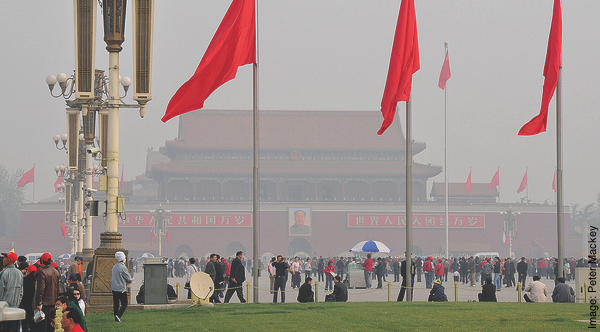 
“I hope the day will come when all you can see from Tiananmen Gate is a forest of tall chimneys belching out clouds of smoke.” -Mao Zedong, October 1949

As with many stories in China, this one starts with Mao Zedong.

Having just declared to Tiananmen Square the founding of the People’s Republic of China, the Great Helmsman soon thereafter described his utopian vision for central Beijing—a sight familiar to any who might visit the capital’s main plaza today.

Sixty-six years later Mao’s successor, Chinese Communist Party General Secretary Xi Jinping, stood before an audience in Beijing with US President Barack Obama to make a joint announcement on carbon emissions, hailed in some publications as a landmark shift in how the world’s top two carbon emitting nations would combat climate change. Mao’s vision of a forest of smokestacks surrounding Tiananmen Square looked set to crumble, its canopy of haze soon to dissipate, all much to the relief of the capital’s smog-choked residents.

Yet three months later and ten months from talks in Paris that will determine whether humanity can control its CO2 emissions and in so doing avert global catastrophe, China remains a carbon wild card. The cost of its seemingly miraculous economic ascent can now be measured in the coal burnt and carbon released to reach the country’s present, towering financial stature. It is this dirtiest of fossil fuels that has helped keep the Chinese Communist Party in power and accountable to only itself—and thus in a position perhaps more than any other group to determine whether carbon emissions will pass the tipping point that will guarantee an end to the climate as we know it.

But where the party has declined to comment independent research has provided rough projections, and the outlook could be grim despite a recent slowdown in the country’s growing consumption of coal. Calculations by China Economic Review based on the figures in these forecasts show that by 2035, China could plausibly burn up 42-47% of the entire world’s remaining carbon budget for now till mid-century.

While it is true Beijing has in the last year been more receptive to discussion and collaboration addressing climate change than before, it has yet to actually make any concrete, measurable promises to curb its own emissions. And though coal will almost certainly continue to shrink in its overall share of China’s energy resources thanks to an impressive dedication to building up renewable energy resources like wind and solar, policy analysts and energy industry sources agree that the absolute amount burnt in the next one to two decades will continue to grow.

Meanwhile the Chinese public has become increasingly uneasy with the cancerous smog that often suffuses its cities, farms, schools and homes. But currently there appears to be little pressure on authorities to do much more than get rid of that haze. Policies already being enacted look set to oblige by moving the plants that pollute China’s skies to its less-populous western provinces, then connecting those to its crowded coastline with an electricity mega-transect. Thus blue skies for Beijing may not guarantee a low-carbon future for the country or word at large.

Some are optimistic that China can overcome its dependence on coal. Certainly the price of failing to shrink humanity’s carbon footprint is too great to ignore—and China may face some of the steepest costs. Intensified droughts in its already parched North will be punctuated by increasingly severe storms and its coastline will continue to shrink beneath a rising sea.

But at the recent United Nations climate summit in Lima, Peru, Chinese negotiators seemed intent on sticking to their old line: Since developed nations had emitted so much carbon during their own industrialization, it was unfair to expect still-developing countries to forestall their own economic growth for the climate’s sake. The countries present barely got the precursor to a deal through, and that required days of overtime negotiations.

“The outcomes of the Lima conference do not give much reason for a sound climate deal in Paris,” said Jost Wübbeke, a research associate focusing on energy, raw materials, the environment and climate change at the Mercator Institute for China Studies (MERICS). “The Lima decision neither determined a specific end date for reducing emissions nor transparent rules for proposing country targets [in December]. In light of the fact that China was one of the leading countries that pushed for watering down these two aspects, it becomes unlikely that China will propose a substantial target for the Paris negotiations.”

That Beijing should argue it has a right to burn coal is unsurprising in light of that fossil fuel’s role in vaulting the West ahead of the rest during the 19th and 20th centuries. Coal-fed steam power drove the engine of industrialization in the United Kingdom, Europe, America and later Japan such that they could conquer, colonize or otherwise subjugate the rest of the world — including the two rising powers now most concerned with the economic fallout of a hard carbon cap, China and India.

China’s own coal consumption, a proxy for carbon emissions, saw its first big bump in the late 1950s, according to data gathered for a working paper (pdf) from Stanford University’s Program on Energy and Sustainable Development. In those years the use of coking, or smelting coal jumped as millions abandoned their farms to attempt to make steel in backyard forges and vault China into an industrialized state per Mao’s Great Leap Forward. When around 36 million starved and almost no tenable steel was produced the plan was abandoned, and coal use slumped.

With Mao’s death and Deng Xiaoping’s rehabilitation, the industry was revivified as market incentives were introduced to coal mining in an attempt to address China’s alarming electricity shortages. Small local mines flourished alongside centrally planned ones, and production began to boom. After a dip following the Asian Financial Crisis of 1997 coal production and consumption again zoomed to unprecedented heights at unheard of speed once the World Trade Organization made China a member state in 2001.

Since then a sense of impending crisis has grown over humanity’s apparent inability to come to an accord over how, sometimes even whether, to limit its emissions. That sense of panic was compounded by a dense paper published in the April 2009 edition of the journal Nature (simplified and popularized by a 2012 Rolling Stone article), which lays out the math behind what must be done: To have a four-in-five shot at limiting global warming to 2 degrees Celsius and hopefully prevent severe climate change around the world, humanity cannot release more than 565 gigatons of CO2 into the atmosphere during
the 40-year period following 2010 (1 gigaton = 1 billion tons).

That is a tall order, and the challenge grows still starker looking back over the total global emissions from the decade prior: 303.05 gigatons by the World Resources Institute’s estimation. Of that, China accounted for 21.01%, or 63.68 gigatons.

In 2012, the most recent year for which comprehensive data is available, it accounted for 9.86 gigatons, or 26% of the global total according to the European Commission (pdf). Going forward, it will probably continue to account for a high proportion of global emissions provided the country adheres to its current coal-fueled, increasingly consumption-driven model of growth. That seems likely based on a recent forecast from the International Energy Agency (IEA) for 2014-2019. As described by ChinaDialogue, the report suggests China will add more coal demand than any other country in the world every year until sometime in the 2020s, with China’s coal consumption growing 2.6% until the year 2019, up more than 100 million tons.

China may publish its own carbon emissions forecast soon as well. Under the working plan recently approved at UN climate talks in Lima, countries are supposed to publish emissions plans in the first quarter of 2015 to lay the foundation for a final agreement in Paris in December. Although there is currently no official emissions projection from China, independent estimates do already exist for the country’s CO2 emissions over the coming two decades.

At first glance, these appear to range substantially: Based on the IEA’s latest projections and an MIT-Tsinghua joint report (pdf), by 2035 China’s emissions could respectively hit a cumulative low of about 186 gigatons of emissions if the most stringent restrictions are implemented or an aggregate high of roughly 332 gigatons without any policies whatsoever (including those now in place). But neither of these outcomes looks likely given the cuts involved, or lack thereof, when compared to current policies.

These two totals provide a plausible predictive range that helps frame global emissions going forward: In the course of the next two decades, China could potentially exhaust about 42-47% of the entire world’s allotted carbon budget from 2010 to mid-century. That would hypothetically leave only around 297.6-327.2 gigatons left for the rest of the world to emit over the next 35 years—and that is before taking China’s emissions after 2035 into account.

Wübbeke, at MERICS, suggested that if China wanted to make a significant contribution to keeping carbon emissions from hitting the danger zone, its emissions would need to peak in 2020 based on the IEA’s most recent CO2 emission scenarios. That would fall in line with the most optimistic projection from the IEA known as the “450 Policies” (green line).

“However, if China’s emissions were to peak in 2030, it would fail to make its individual contribution to limiting the CO2 concentration to 450 ppm (parts per million),” the maximum global concentration at which more apocalyptic global warming might be avoided, Wübbeke said. “The recent agreement with the US indicates that China will go more in the direction of the ‘New policies’ (light blue line) scenario and not the ‘450 ppm’ scenario.”

The above projections are just that: Projections. The global energy industry can be notoriously unpredictable, with common sense among experts regularly upended by developments such as the hydraulic fracturing (fracking) boom in America, which has helped boost US oil production since 2008 by over 50%.

But in lieu of any official forecast from Chinese authorities, predictions like those from the IEA and MIT-Tsinghua provide the best available yardsticks for measuring future official estimates and promises as countries around the world prepare to submit figures to the UN ahead of the Paris convention in December. Of late, neither China’s words nor deeds have been encouraging. •

Next in part 2 of 3: What China’s promises, or lack thereof, suggest about its future emissions