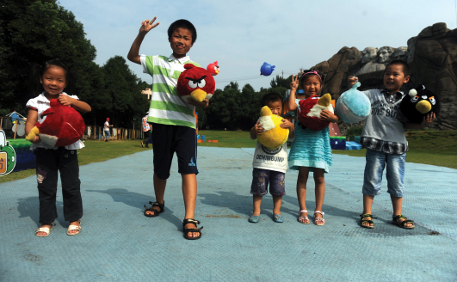 Those who have ridden public transportation in Chinese cities in the past year have probably heard this sound more than once over the din of the bus or subway. Like many countries, China is caught up in the rage over “Angry Birds,” a mobile game developed by Finland’s Rovio that involves slingshotting noisy birds at complex architectural structures to kill egg-stealing pigs.

The game may well be China’s most popular form of entertainment after sleeping. According to Sang Cheng, the game’s Greater China agent, “Angry Birds” has now been downloaded more than 350 million times in China, up from around 100 million only six months prior. Elsewhere, the game’s fame is earning Rovio a dedicated Disneyland attraction and a feature-length film, as well as plenty of capital: The developer received an investment of US$42 million in March and is rumored to be negotiating a deal that would value it at US$1.2 billion.

“Angry Birds” is not the only beneficiary of China’s soaring demand for mobile games. Those with smartphones or tablet devices have also taken to slicing and dicing oranges and watermelons in “Fruit Ninja” and battling the undead in PopCap’s “Plants vs. Zombies.” Overall, China’s mobile game market shot up 18% year-on-year to US$40 million in 2010.

Besides their raging success in the Middle Kingdom, all of these games have something in common: They are all the products of foreign developers. So far, most Chinese developers have merely copied already-successful foreign games, rather than innovating themselves. (Just witness the proliferation of “QQ Farm,” “Happy Farm,” “RenRen Farm” and other lookalikes following the success of Facebook’s “Farmville.”)

No doubt that in the near future local developers will continue to pump out more games featuring zombie defense, ninja-related fruit-slicing and bird projectiles. But will Chinese game companies eventually be able to muster the design and branding skills to create global hits?

As is often the case, the biggest obstacle is the inadequate protection of intellectual property: Making clones or derivative games may be enough to keep a company afloat, but to really take control of their future, game companies must also control their intellectual property.

But there are possible contenders. One is Happy Latte of Beijing, which makes the highly profitable cowboy western dueling game “High Noon” for iPhone and iPad. “High Noon” has been a big hit with Asian gamers, has a notably high monetization rate, even for a mobile game, and could become a global hit as well.

What’s the key to Happy Latte’s success? It benefits from a mix of foreign and local management, and seems to understand the very basics of mobile games: Players want products that are simple, innovative, irreverent and totally time-wasting. One of Happy Latte’s earlier roll-outs was a free game called “Pee Monkey,” in which players helped their monkey create an ocean of urine.

Happy Latte remains an exception. For the majority of developers, piracy continues to cut deeply into their revenues – and that encourages them to crank out lackluster copies rather than investing time and money in an innovative game that will quickly be ripped off.

However, there are signs that domestic companies are beginning to innovate, especially as more overseas operators look into acquiring games from China. Many local studios have found that designing products for foreign platforms is a lot easier than trying to work with China’s big companies, like Tencent, Shanda Games and Renren, which often demand a larger share of revenue than even Apple or Facebook.

China’s major game operators may have to change their attitudes and court talented developers more aggressively. The country’s big game companies are desperately trying to move beyond massively multiplayer online role-playing games, the slowly dying format that is their traditional money-maker, into social and casual games, now seen as the genres of the future.

That trend has been echoed around the world, as traditional game companies like Electronic Arts and even media companies like Disney acquire small social game developers and beef up their mobile content. The iPhone has become so popular as a gaming device that even Nintendo, the manufacturer of the leading global portable gaming device, the Nintendo GameBoy DS, is warning that Apple devices are cutting into its sales.

China claims the compass, paper and gunpowder among its historical innovations. Cantankerous birds and urinating monkeys may not be of quite the same caliber; however, if China’s developers want to succeed globally, they had better get on board. Both Chinese and foreign gamers have proved to have an insatiable desire for pissing, slicing and slingshotting their time away.