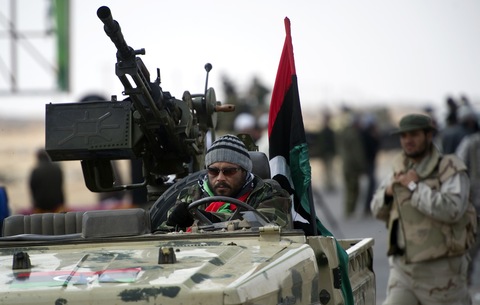 The limits of non-interference

“Why are you attacking Libya?” the fruit shop owner asked, jabbing a finger at my chest.

“Me? Not me. I’m in Shanghai,” I joked, attempting to defuse the situation.

“Just one small country, and three big countries are attacking it,” he continued, seemingly unimpressed with my attempt at humor.

“Well, it’s a complicated situation,” I replied, once more looking to dodge an increasingly awkward discussion, my peripheral vision registering the arrival of a few local observers.

“Why do you like war, eh?” he continued, as I tried in vain to pay for the bag of plums in my hand, “We Chinese just want peace. We never interfere in other countries’ business.”

My above exchange with the fruit seller, repeated thrice more – almost word-for-word – in Shanghai taxis over the days that followed, illustrates that the CCP’s explanation of the crisis in the Middle East has taken hold among the people. If China-watchers had a cent – or a renminbi coin perhaps – for every time Beijing proclaimed its opposition to the “interference” in the “internal affairs” of another country – including, naturally, the middle kingdom itself – then they would have quite a pile of change. Perhaps enough to buy several bags of plums.

The Chinese foreign ministry seems to have another issue to avoid interference in with each passing week. The mantra of non-interference has been trotted out once more over the last two weeks, as China (in spite of its notable abstention at the Security Council) launches a full-on PR offensive in opposition to the ongoing Libyan conflict.

While the concept is a noble one, it is also completely implausible in the modern world, especially when you wield the financial clout that China does.

When China ploughs countless millions into Sudan in exchange for oil and minerals, it would take the most myopic of observers to claim that this does not impact upon Sudan’s domestic affairs. A Chinese businessman looking for the new contracts on offer in embryonic South Sudan will need the silverest of silver tongues. Whether China likes it or not, it picked a side when it signed those checks.

The same is true in Libya, and Chinese money flowing into the pockets of the Gaddafi clan will make terrible PR, should the dictator eventually fall. Of course, Western companies had even more money flowing into Libyan government coffers: ENI, Occidental, Petro-Canada, BP, Hess, Marathon, Conoco-Phillips and ChevronTexaco were all involved, to name but a few.

The key issue that differentiates China from the others is the source of the investment. China may claim that the firms investing in these projects are independent actors, but very few people buy that. Most, if not all, Chinese investment in overseas energy and infrastructure is coordinated, often as part of packaged diplomatic deals. The NATO countries can far more plausibly claim opposition to offending regimes, separating the actions of companies from their place of origin. Handily, this then allows them to join – or indeed help engineer – the ‘winning team’.

This is the price of central control, “China Inc.” if you will. Going forward, China has two options to avoid what is in effect significant hypocrisy. It can abandon the rhetoric of non-interference, and effectively plant its flag on the side of the incumbent power. Or it can liberalize these big businesses, grant them full decision-making autonomy and be able to more plausibly claim independence. Neither is at all likely, as neither is in the government’s strategic interest, and it is hard to see how the rhetoric of non-interference will ever lead to a meeting of foreign policy minds between China and the West.

Unfortunately for China, it may also deprive them of economic opportunities if those who suffer at the hands of the Gaddafis and al-Bashirs of this world seize power. Unfortunately for me, the continued propaganda makes it highly unlikely that this will be the last time innocent young Englishmen are harangued by irate fruit shop owners.