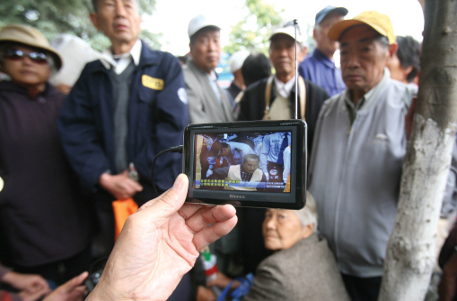 China’s war over morality in the media has come to a head this year in television. The State Administration of Radio, Film and Television, which has the final say over all content broadcast in China, passed regulations in October sharply limiting the number of entertainment programs such as reality and dating shows that can be shown during prime time. Meanwhile, leaders at all levels have decried vapid shows as unhealthy and potentially detrimental to morality. “Super Girl,” Hunan Satellite TV’s popular “American Idol” copycat, was a case in point, removed from the air this year for exceeding a state-imposed 90-minute limit on entertainment programs.

This government-led onslaught seems to have drawn sharply different reactions from young viewers and their older counterparts. Broadcast TV, which is controlled by China Central Television on a national level and smaller state-owned companies on a provincial level, attracts an older, more traditional audience in China and is one of the easiest media industries for leaders to regulate; China’s younger viewers, meanwhile, gravitate to online video sites, which remain one of the hardest media sources to regulate. China Economic Review talked with Chinese people around the country about their viewing habits, their opinions on censorship, and whether online video can ever fully replace the traditional tube.

I don’t think TV will become obsolete in the foreseeable future, at least not in China. It’s a great source of entertainment and a way to kill time. My favorite channel is Shanghai Media Group’s Dragon TV because it has in-depth news coverage, quality TV series and entertaining dating shows. From the content perspective, I would say that provincial and local stations are way better than CCTV, since they cover local news and a mixture of useful information like traffic updates and weather reports. In comparison, CCTV programs are less relevant – they’re all about news releases from government officials.

I like watching financial programs on CCTV 2 and the local Beijing TV station, like Capital Economic Report. For entertainment, I usually turn to CCTV6, the movie channel. I think CCTV’s coverage of news is more comprehensive because it has a stronger international reporting team. As for entertainment, I prefer local stations because CCTV can be too politically oriented. In our neighborhood we can pay for HBO shows, but I only watch them occasionally because of the language barrier. I would say only about 10% of the shows I watch are foreign. Chinese all understand that certain ‘sensitive’ contents are cut out by censors, but they should at least ensure that the plot remains logical. However, for more mature shows, it’s better to leave them some creative room. Regarding the ban on ‘Super Girl,’ everybody has a different interpretation. I don’t think the ban was necessary, since the show isn’t really indecent or ‘detrimental to public morality,’ as some have claimed. It’s just entertainment. If the regulation has any positive effect, it will be helping to wipe out a bunch of copycat shows with sensational content.

I’m not sure which drama is my favorite, but I can say the ones I watch the most are CCTV news and drama programs, Hunan Satellite TV’s dating show ‘You are the One’ and local news and commentary programs. I prefer CCTV news over local news programs because of its national coverage and predictive comments from a macro perspective. I’m not a big fan of foreign TV shows and I especially dislike foreign dramas, since they have little moral significance or historical value. I can’t even remember the last time I saw one of those shows.

Sometimes I tune into Hong Kong stations like Jade or Pearl when I get home from work. Occasionally I watch investigative programs like ‘Topics in Focus’ on CCTV1. But objectively speaking, the news commentaries on CCTV are pretty much propaganda. Other than that, I watch a few American dramas online. I prefer to get my news and movies from the internet – it’s more convenient. It seems to me that everything online should be free – there’s no way I would pay for that content. I think there’s little chance that online video will make TV obsolete anytime soon, especially since China is an aging society. Many websites just copy the content produced by TV stations. So given the scarcity of original programs, I think TV will still be relevant for a while. As for SARFT’s recent restrictions on entertainment programs, I don’t think it’s a fair deal. The regulators are simply targeting satellite and provincial stations because CCTV isn’t very competitive in producing programs. CCTV has to abide by the rules as well. Since we have access to Hong Kong TV stations, we can see the stark contrast in terms of the limitations on the coverage of mainland TV stations. Officials and party leaders are always in the limelight, and lots of pressing social issues are left untouched. But even the Hong Kong programs we can receive are censored sometimes. Some ‘sensitive topics’ like social unrest are removed. And I’m not very optimistic that the situation will change dramatically in the next few years, because of the domestic political pressures and the central government’s need to present a unified voice.

I don’t feel too bad about ‘Super Girl’ being taken off the air. Many of the reality shows or competitions in China are awkward copies of foreign ideas. Plus, I feel the candidates’ performances are getting less original than in the first two seasons. Maybe the TV station should consider producing these shows less frequently to maintain their appeal, or maybe host the show every other year. My favorite foreign reality TV show is ‘The Apprentice.’ It seems like the judges on foreign talent shows are more objective and fair than Chinese ones – the winners of Chinese shows are often determined by sponsors or other parties, rather than the audience.

I never watch news broadcasts on CCTV1. The news is always the same – either about the meetings of government officials, our “social well-being,” or riots and political unrest in other countries. For up-to-date international news, I go to Sina Weibo instead. If I had the chance, I would probably opt for foreign TV channels instead of Chinese ones. I think most working professionals like me have stressful days and just want to chill out a bit at night by watching TV. That’s probably why variety and entertainment shows like ‘Variety Show of Mr Con & Ms Csi’ (Kangxi Laile) in Taiwan are so popular among young Chinese people. The older generations might sneer at the shows and call them silly, but for us, relaxing is the key. We’ve made some progress in achieving greater freedom of speech in mainland China, but I can still see a huge gap when watching Taiwanese shows. I like to watch these shows because I have an innate curiosity to see new things. It’s mind-blowing for me to see that they can interview Ma Ying-Jeou in such a casual manner on entertainment programs. If Chinese TV programs were one day as ‘vulgar’ as those in Taiwan, that would actually be a big step forward for the industry. SARFT’s ban on entertainment shows is actually somewhat self-deceptive. On the surface these regulations are meant to protect you from ‘morally corrupt’ content, but you can also interpret it as a violation of individual rights. To some extent, it’s a kind of retreat, not progress.