Home Business The powers that be: The black hole of regulation, censorship and money-making 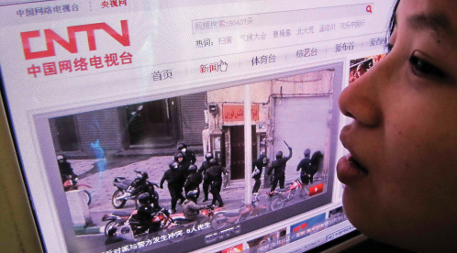 The powers that be: The black hole of regulation, censorship and money-making

Homer’s “Iliad” probably doesn’t rank high on the reading list of executives in China’s internet protocol television (IPTV) and internet television businesses. But its themes of multi-layered conflict – in which sparring heroes enlist the intervention of the gods, in turn sparking partisan conflict in the divine realm – would likely feel eerily familiar. Both vaunted technologies have seen their growth severely stunted due to bitter regulator turf wars generated by the dueling of their corporate champions. Traditional television is analog, meaning that it is uni-directional: Broadcasters transmit messages to viewers, but viewers have no way of interacting with broadcasters. China’s cable network operators are now in the process of converting to digital, bi-directional TV (DTV), which enables viewers to request video on demand, vote during reality TV shows and so on. Yet the same digital, bi-directional capabilities were already available with IPTV, an alternative technology which runs on telecom operator networks.

Competition between the two platforms has predictably split along operator lines, with DTV being promoted by cable network operators, and IPTV advanced by telecom network operators. These companies have in turn dragged their respective regulators into the fight.

DTV broadcasters and cable network operators are both clearly under the remit of the State Administration for Radio, Film and Television (SARFT), and IPTV and telecom network operators are firmly under the purview of the Ministry of Industry and Information Technology (MIIT). But if SARFT’s broadcasters transmit their content via IPTV and MIIT’s telecom lines, who is in charge?

The short answer is that no one knows, and something of a turf war seems to have broken out between SARFT and MIIT, with profound commercial implications.

The usual story goes as follows: Telecom operators attempted a series of local IPTV trials across China and obtained MIIT’s approval for the exercise. But competing network cable operators fought back via SARFT, which insisted that its broadcasters must obtain a newly-created IPTV license. Put another way, cable network operators effectively used SARFT to stall for time until they developed their own DTV platforms to compete with IPTV; the result is that China now has around 100 million DTV subscribers, compared to just 8 million IPTV users.

Internet television posed an even greater threat. Not to be confused with online TV, internet TV users purchase a set-top box which allows their television to translate and display internet content. Viewers can then choose from an array of DVD movies to watch, after which their TV taps into a peer-to-peer network that downloads the films onto the set-top box CPU.

Like any good disruptive technology, internet television manages to bypass both regulators and telecom operators, to the chagrin of both. Unlike IPTV, China Telecom and China Unicom cannot charge a dedicated monthly service fee for generic internet use. And internet TV content flows outside the remit of censors, because peer-to-peer services (such as PP Stream, Xunlei and others) claim no responsibility for user activity.

No regulator, no chance

Lack of censorship might seem a boon, but it also left internet TV with no regulatory champion to fight for its cause. SARFT stepped into the gap, issuing regulation requiring TV makers to cooperate only with licensed internet TV platform operators – licenses which were coincidentally all awarded to the companies SARFT gave IPTV licenses.

“They’ve basically moved internet TV and IPTV firmly under the control of companies directly regulated by SARFT,” said Mark Natkin, Beijing-based managing director of Marbridge Consulting. If it appears on a television screen, SARFT believes it has a right to regulate, no matter what the mode of transmission, he added.

This is unfortunate, because MIIT is widely regarded as having more commercial experience than SARFT, and is better at balancing both political and business imperatives. “A more balanced role between the two [regulators] would almost certainly help accelerate the development of IPTV and internet TV,” said Natkin.

Higher powers are meant to stay neutral and above the fray, but, as both Homer’s gods and Chinese regulators know, oversight can easily snowball into patronage.