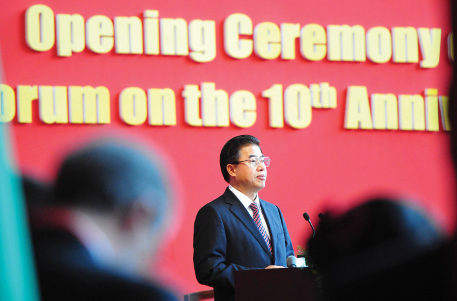 In October, the US filed the 602nd trade remedy investigation against China, alleging that Beijing had decimated the US solar industry by offering nearly 200 undisclosed subsidies to its solar panel makers. It was hardly a fitting commemoration for the tenth anniversary of China’s accession to the WTO.

Ten years ago, the international community had high hopes for China’s incorporation into the international trade system. “The WTO provides China with a path to market economics, which will help break local and departmental monopolies that have proven so hard to crack from inside,” wrote the head of the American Chamber of Commerce in China at the time.

To be sure, China has made progress in liberalizing its markets. The general tariff has fallen from 15.3% to 9.8%, contributing to a five-fold increase in imports and helping China grow from the world’s ninth-largest economy to its second.

Yet after a decade, the economy remains far from open. China has failed to meet several of the original conditions for its entry into the WTO, such as opening its telecom and financial sectors to foreign competition. While multinationals in the consumer sectors have made inroads into the Chinese market, many “strategic sectors” remain closed. The constant flurry of WTO complaints – ranging from financial information providers and rare earth producers to boiler chickens and steel – attest to continued limits.

However, China also has its share of complaints about foreign companies, some of whom have genuinely not played by its rules. In recent months Chinese media have lambasted foreign companies for establishing low-end manufacturing bases that destroy the local environment. One recent story alleged that an Apple supplier discharged polluted water into the Yangtze River; another pointed to battery maker Johnson Controls as the source of elevated lead levels in Shanghai children, a charge the company has denied.

This year will present new challenges for trade liberalization. Protectionism is rearing its head both at home and abroad; anemic growth and sovereign debt crises in the US and Europe have combined with slowing exports and rising economic nationalism at home to stall many free-trade reforms. Some Chinese pundits even argue that the WTO is contributing to rampant inflation, because Beijing is bankrolling exporters that send low-value manufactured goods to rich countries.

All this suggests that the recent trend of “the state advances, the private sector retreats” will continue in 2012, especially with the caution surrounding China’s leadership transition. With multinationals now looking to China to jumpstart growth, expect the list of trade investigations to lengthen.