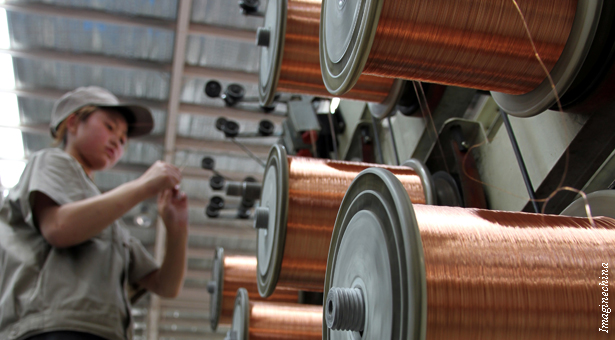 China’s clout as an international dealmaker is surging. Companies, both state-owned and private, are buying up assets around the globe, and China Inc has an increasingly heavy influence on the state of the international business.

Few knew that the creation of an antitrust regulator in 2008 would give China reach into cross-border deals where it had little purview previously. Nowhere is this more evident than in the Glencore-Xstrata deal that cleared Chinese antitrust regulation last week. In yet another display of its rising stature as a global economic power, China forced the world’s biggest listed commodities company to agree to sell off a more than US$5 billion copper mine in Peru, among roughly 15 pages of conditions on the deal.

Glencore and Xstrata’s participation in the massive Chinese metals market – the country is the largest importer of copper and iron – may have given regulators the basis to review the deal, analysts said. But the main question was whether or not there was really any risk that the deal might stymie market competition.

Certainly, the Glencore-Xtrata deal falls within the scope of China’s Antitrust Law that China enacted in 2008. Under the law, the Ministry of Commerce must approve any M&A activity where the combined companies have more than US$63 million in sales in China and US$1.5 billion in global sales, a threshold the merged companies easily clear.

But based on what traditionally constitutes antitrust reviews around the globe, China should have kept its nose out of the Glencore deal. Considering the companies’ percentage share of the China market, the deal looks far less like an antitrust issue. In the US and EU, governments step in when the market share of a commodity supplied by one company reaches 30-35%. But China’s imports of copper from Glencore and Xstrata didn’t surpass 18% of the domestic market, according to the Financial Times.

“This is extremely low for a market threshold,” FT quoted an anonymous lawyer as saying. “This case is about China securing resources at a fair price; it had nothing to do with antitrust.”

That’s certainly what it looked like. China’s review wasn’t a black-and-white procedure, specifying whether or not the deal would create a firm with monopolistic ability to manipulate the market. In fact, the case, which was the final obstacle to completing the 14-month buyout, looked more like a deal cut with China itself. In the end, China cleared the acquisition only after Glencore agreed to sell the country a minimum amount of copper annually, 900,000 tons of copper this year, under contract prices set by Beijing regulators for the next eight years.

Among the lengthy conditions, the most important connected to copper. China requested that Glencore sell off a Peruvian copper mine that Xstrata had developed for more than US$5 billion. This deal that the company struck with China seems to say its approval comes at a cost.

China appears to have developed a penchant for meddling with international deals. China, the king of massive state-powered monopoly, is often the country to sign off last on such cases – and they’re not shy about letting companies sit in the dark while it muses. Recently held up deals include Google’s acquisition of Motorola Mobility, which took 10 months to gain Chinese approval, and Caterpillar’s buyout of Bucyrus International, which took eight months.

In 2009, pharma firm Pfizer’s acquisition of Wyeth demonstrated early on that China would let some big deals proceed only after they grab a piece of the action. China refused to clear the deal unless Pfizer sold off investments it held in swine flu vaccines on the mainland.

So far, this kind of forced international dealmaking has garnered surprisingly little criticism. Companies seem to follow along as if they have no other choice – and they don’t if they would like to keep their share of the China market. But China should remember that its clout on the international scene comes with a heavy responsibility to maintaining balance in global economy. Working in self-interest at the highest levels could generate resentment in equally lofty places.