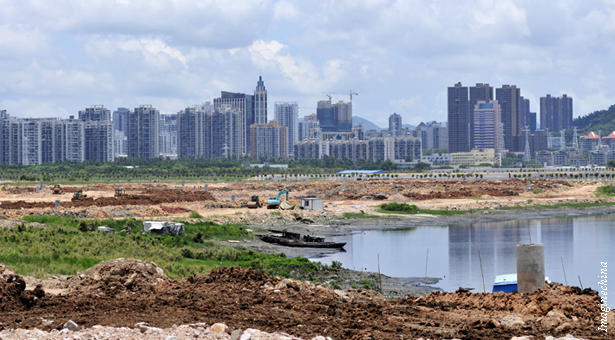 An oasis of reform

As the story of Manhattan goes, the island was sparsely inhabited by Native Americans until Dutch settlers purchased the property for a modest sum in the early 1600s. The small plot of land rose over the centuries to become the pinnacle of the financial world.

Now China hopes to do the same in Qianhai special development zone, announced last June. While the moniker “Manhattan of the Pearl River Delta” that has been applied to the zone may be a bit of official bombast, there are some comparisons to be made with the humble beginnings of the New York burrough. Qianhai – located on reclaimed land – is also being built up from nothing and is similarly small, comprising 15 square kilometers.

Officials seek to shape the zone into a modern financial services heavyweight by making it a gate for moving capital in and out of the mainland. The zone was hailed as a major step to opening the capital account and instituting full convertibility of the yuan into dollars, reforms eagerly awaited by many in the financial world.

Regulators plan the hallmark of the zone to be direct cross-border lending in renminbi, an act that has previously been impossible under China’s strict capital controls. China allowed mainland companies to settle cross-border transactions in renminbi for the first time in 2009. Since then, growing stockpiles of offshore renminbi have amassed in Hong Kong with limited means to reinvest that money. Qianhai could serve as a portal for that capital back into China.

But major pronouncements and lofty language aren’t enough to make a model for China’s new service economy. Actual investment levels have been low in the roughly 10 months following the official announcement.

Consider, for example, direct cross-border lending with Hong Kong. In January, 15 Hong Kong banks agreed to lend an equivalent number of industrial companies roughly US$325 million (RMB2 billion) in renminbi loans for construction projects in the zone, according to Z-ben Advisors, a Shanghai-based investment consultancy that tracks the developments in Qianhai. That’s a meager amount compared to the US$101.4 billion (RMB624 billion) of renminbi deposits sitting in Hong Kong accounts at the end of January.

Nevertheless, progress is being made in the zone, and investors should focus more on the regulatory changes that have been implemented, said Cindy Qu, a senior analyst at Z-ben. Regulators are attempting a variety of reforms to build up the zone on a well-rounded service economy. The National Reform and Development Commission (NDRC) has already announced guidelines for the financial services, logistics, technology and professional services sectors in the zone. Regulators have implemented 14 of the 22 planned policy shifts in Qianhai, according to Z-ben’s latest report on the matter.

“Qianhai still needs time to build up a better financial and banking system,” Qu said. While tangible infrastructure – the buildings to house financial institutions and roads to service them – are part of the development, the zone equally needs the financial systems in place to allow for money to easily be transferred across the border with Hong Kong. The zone also needs time to attract experienced bankers.

One key area to watch will be the private equity “fund of funds” that was established by China Development Bank, a state-owned policy bank. The fund will raise renminbi from Hong Kong and the mainland to be invested domestically in other private equity funds. The fund seeks to raise up to US$8.1 billion (RMB50 billion) but is still in the fundraising stage. Once that is finished later this year, the funds will potentially be funneled into local industries and drive faster development in the zone, Qu said.

The widening of the Renminbi Qualified Foreign Institutional Investor (RQFII) program that allows offshore yuan to be reinvested in the mainland should also be a boon to Qianhai. The investment quotas given under the program will grow from RMB70 billion in January to RMB270 billion under expansion plans announced late last year. Any increase in cross-border currency flows will potentially bring business to the zone, which is specializing to handle such transactions.

Whether Qianhai will turn into a model for the rest of the country, as some have suggested, remains to be seen. Qu is skeptical that other areas could duplicate the zone’s model because Qianhai is uniquely situated near Hong Kong and can attract resources from the already developed financial sector there. “Qianhai has its own character and can develop those kind of financial reforms.” Perhaps select parts of the Qianhai model, such as the fund of funds, could be used elsewhere in the country, she said.

Qianhai may indeed be on the cutting edge of financial reform – albeit the forefront of a very slow moving push to internationalize the yuan and allow full convertibility to dollars. Officials dream of Qianhai as a Manhattan of the Pearl River Delta, and the government can certainly build enough skyscrapers to make the zone look the part.

But the reason Manhattan is the center of world finance is because it’s the flagship city of the world’s largest free market. The free market sets the pace of change, generally fast, on the island. As long as the government sets the pace of change in Qianhai, the zone appears to be little more than a minor experiment that falls in the shadows of other major global financial centers.