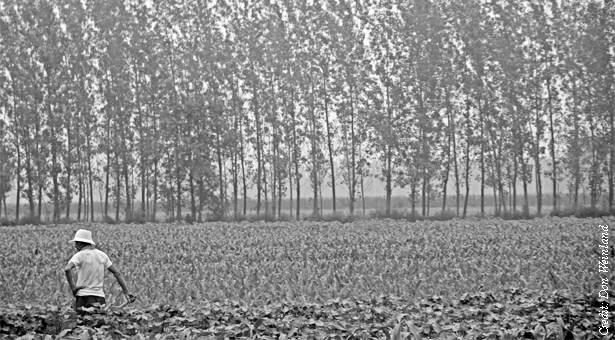 China’s farmland is sitting on a political fault line. On one side, reformers in Beijing are now pressing for market-based reform in the countryside to usher in a modern agricultural era. On the other, conservatives seek to preserve a communal way of life while worrying that a shift in agricultural policy could shake the country’s communist core.

That much is evident in the fragmented messages from Beijing in recent months.

During an inspection tour last week through Jiangsu province and Shanghai, Premier Li Keqiang said that some of China’s family farm units should transition toward larger-scale farm production. On its face, that statement hardly seems controversial: Most developed agricultural countries have consolidated plots into vast fields manned by relatively few people with the aid of state-of-the-art machinery.

Updated as of Sunday, April 7: Premier Li Keqiang’s cabinet has approved a major agricultural reform in Heilongjiang province that will work toward consolidating farmland.

China has not made much progress toward this goal as of yet. Most of China’s farming takes place on small plots, technically still owned by rural collectives, that are cultivated by individual households with rudimentary tools. Li’s agenda would deliver the countryside into the modern era but also serves the dual purpose of continuing the steady march of urbanization. Modern agriculture techniques could usher hordes of rural residents into cities to combat labor shortages and help fuel China’s economy.

Not everyone agrees, however, with the new premier on exactly how fast China’s farms should morph from quaint rice paddies plowed by a man and his ox to that of endless cropland swept over by tractors.

In fact, in early February, in one of the country’s most important policy statements, the government opted for the more bucolic vision. In the annual economic guidelines known as “Document No. 1,” the central government said family farms must stay intact to protect the livelihood of farmers and secure China’s self-sufficiency in grain production.

With these disparate remarks, the course that rural reforms will take is unclear, even as China gears up to launch a plan for urbanization in the first half of the year. Guidelines on land reform should be part of that report and will most likely pull from property experiments the country has already conducted. As disputes between villagers and local governments rage on over land rights, Beijing will need to give straightforward answers on which direction reforms are headed.

So far, discussion of the topic gives the impression of a country not yet able to push land reform toward a market-based future – or perhaps one afraid of falling back on a dark past.

There’s already reason to fear for the wellbeing of the family farm. Since the early 1990s, local governments have circumnavigated the law in order to convert rural land into city land. The process allows officials to expropriate land far below market price and sell to developers for big profits. Compensation to farmers is characteristically low, and efforts to boost the sums they receive, which would help them move away from the land, have been ineffective.

That’s because the land law stipulates that compensation is based on the past 20 years of the land’s average crop yields rather than the plot’s market value, said Cheng Enjiang, an adjunct professor of agricultural economics at Zhejiang University. Past attempts to raise the rate, such as an amendment to the Land Management Law discussed then reportedly shelved during the NPC, would do little to secure fair prices for farmers as they did not alter this archaic calculation method.

One stark result of the current system, other than a high rate of debt among local governments (many have used the land as collateral to take out high-risk loans), is social instability. More and more farmers are being forced off their land and into the city without access to healthcare or education. During the last 10 years, villagers have increasingly resisted, filed official complaints and even engaged in violent protests as city or county governments have turned to land sales as a source of revenue, often lining their pockets with cash in the process.

But that’s not to say there isn’t hope for a smoother transition away from China’s family farm, as well as for the people who have worked on them in some form or another for thousands of years. If the central government can speed up reforms, farmers could muscle back some of the benefits of giving up the spade and soil.

Directly selling rural land seems out of the question for the foreseeable future. But an increasing number of rural residents should be able to rent out their land. Rural residents in several areas that are part of land experiments can already do so but the timeframe is usually short and can limit farmers’ abilities to settle in the city. Policymakers are discussing increasing the amount of time that land can be rented out, Cheng said.

For now, Beijing will continue to hesitate on making rural land an asset that farmers can actually possess. Making rural land a tradable asset that can be exchanged for urban land is one method under discussion, Cheng said. Another way to return value to farmers would be to allow them to use it as collateral for loans. Access to credit could help those in the countryside establish businesses not tied to the land or support a transition into the city.

Fortunately, some progress in clarifying the status of the land is already taking place.

In Shenzhen, a bustling city designated as a special economic zone that shares a border with Hong Kong, farmers are being allowed to register their land, which gives individual households a clear link to their holdings and is a step toward being able to transfer its value. The experiment helps clarify the vague legal status of Chinese collectives, which have been a hurdle in the land transition process because it was unclear who, if anyone, actually owned the plots.

A possible next step would be to cut out the middlemen, namely the local government, and deal directly with land developers. Farming collectives would form a shareholding company that holds the right to develop the land, said Green at Standard Chartered, who recently authored a report on reform in Shenzhen. The company could then hire a developer or form a joint venture with one. This would be a breakthrough for farmers. In the past, only the process of expropriation by local governments could convert rural property into land zoned for development.

These experiments may prove productive, but they could easily remain isolated efforts. Several trials have sought to deal with the sticky but pivotal issue only to go largely ignored in Beijing. This is because the status of rural land, particularly China’s collective, is a trademark of whatever semblance of communism still remains in the country. Moving toward a market-based model for land in the countryside could wring the socialist characteristics from this last bastion of eras past. Many leaders are afraid to touch that.

So it’s no surprise that the central government is sending mixed signals on land reform as the new leadership lineup finds its footing in the capital. Conservative forces will hold steadfastl
y to a more paced land reform model that preserves vestiges of a bygone era. Reformers such as Li have already shown that they will push against this and support more sweeping change to the land.

The State Council should release a plan for urbanization in the next three months that would outline reforms through 2020. Perhaps that will give greater direction to the future of the country’s rural land, as well as to the epic transition the people living on it are expected to make.

If there is one thing the government needs to get right, it’s a process for safe and sound migration off the farm and into the city for a portion of China’s roughly 600 million rural dwellers. The political stakes are set high, and consequences for botching the transition could spell out social turmoil including a sharp increase in crime.

Rural land is at the heart of urbanization, Cheng at Zhejiang University said. Regardless of disputes between reformers and conservatives, the government will need to acknowledge the farmers’ rights to their land, and then increase access to the value of this asset, whether it be in the form of a marketable product or a share in a development project.

The soil is, after all, the only resource farmers have to carry them into the urbanity. Chinese farmers won’t complain the day they’re able to sell off the family farm, provided it’s on their own terms.