Home Business The art of rebalancing 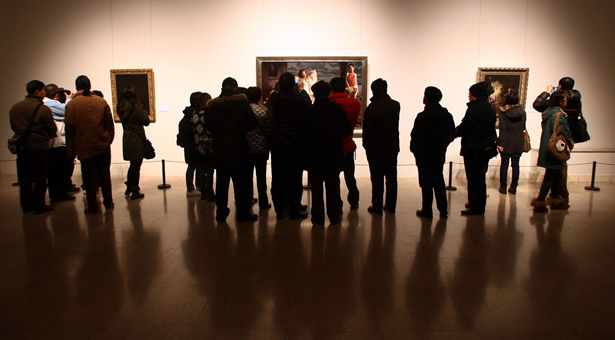 The art of rebalancing

A handful of visitors pause to stare at the sorry remains of a professional camera, impaled through the lens and pinned to the wall by a colorful spear. The trickle of passers-by in ShanghART, one of Shanghai’s better-known art galleries, is about the usual footfall for a humid August morning, said Betty, a staff member. It’s the slow season, and will be for the next few months.

Rumors of a slowdown in the art market have been floating around the Shanghai art district, located on Moganshan Road. But the impact is hard to gauge from the gallery floor. Betty is coy about numbers, but she thinks that ShanghART’s sales are running about even with last year.

Art industry insiders say many Chinese galleries have not been much affected by the recent art market slowdown. Galleries didn’t fully capture recent growth over the past few years, which accrued mostly to high-end auction houses, and so are not as affected by tapering demand. But while the market is growing, it has also drawn in sophisticated Western galleries, who now threaten to beat them on their home turf.

“What I see in many of the Chinese galleries is a certain fear,” said Lorenzo Rudolf, chief executive of Art Stage Singapore, a regional art business exhibition. “Not one of these galleries can compete with [Western] rivals.”

If China’s economic growth over the past decade has been steep, that of its art market has been downright vertiginous. “If you look at the graphs of [sales of] traditional Chinese works of art, they were basically straight up in the air,” noted Suzanne Gyorgy, art finance manager at Citi Private Bank. “It’s all moved so quickly in the past five years; it was such a rapid change that is now having a healthy correction due to connoisseurship.”

China’s art market grew by 177% in 2010 to overtake the UK, and last year grew by 64% to displace the US as the world’s biggest art market, according to Clare McAndrew, a Dublin-based economist at research firm Arts Economics. China now accounts for a staggering 30% of global art market sales.

Yet some segments of the market have benefited more than others. “Since 2008 it’s been the high end of the art market that’s been really carrying the show,” said Gyorgy of Citi Private Bank, adding that the middle and lower tiers of the market have not captured the same gains.

This divergence is primarily a reflection of broader global patterns of wealth, argued McAndrew. The super-rich have emerged relatively unscathed from the global economic downturn, while the middle-class and merely upper-class have borne the brunt of turmoil. Prices for items the super-rich buy, from high-end art to luxury real estate and yachts, have therefore remained buoyant even as lower ends of the market struggle.

The art of investing

The impact of elite buyers is especially pronounced in China. Because they are unable to easily take their money out of the country, wealthy Chinese often face a paucity of assets where they can park their wealth. Capital markets are underdeveloped and property comes with stiff purchase restrictions, so for many investors expensive art functions as an alternative investment.

“There is an obvious inflow of investment capital into the art market, and it can lead the art market value [to be] irrational,” said Guan Yu, Beijing-based director at the research outfit AMMA (Art Market Monitor of ARTRON) The incredible surge in China’s art market during 2009-10 was in large part a result of liquidity from the government stimulus washing up in art, and last year many purchases were simply capital shifting from stock and bond markets into the art world, argued Guan.

Although this flood of stimulus-driven liquidity helped China’s super-rich skate through the 2008 rough patch, the recent economic slowdown and tightened credit has begun to pinch, and high-end art prices have sagged accordingly. Total sales at China’s “Big Four” Chinese auction houses – Beijing Guardian, Christie’s Hong Kong, Poly Auction and Sotheby’s Hong Kong – dropped 32% in spring 2012 from six months earlier and are down 43% from their peak last year, according to figures from ArtTactic, a London-based art research house.

But it’s unclear if that’s bad news for China’s galleries. Both recent growth and the slowdown have been driven by “an incredibly small percentage of the population” in China, according to McAndrews of Arts Economics. These collectors and investors usually acquire their art at auctions, which tend to feature well-known works that auction houses are confident will fetch high prices. While some galleries do occasionally tread into this territory, in general they tend to promote mid- and lower-priced works by up-and-coming artists.

Such dynamics partly explain why around 70% of Chinese art is sold via auctions and just 30% in galleries, compared with a 50-50 global auction-gallery average and 30-70 in more developed markets such as the US, where the middle- and upper-classes play a bigger role. It could also explain why auction markets appear particularly hard hit by the slowdown, even as anecdotal reports indicate galleries are holding up fairly well.

Many in the industry hold out hope that as China’s program of economic rebalancing shifts spending power away from the state and corporate sector towards consumers, the middle- and upper-classes will begin to play a bigger role in the Chinese art market. McAndrews of Arts Economics estimates that when average incomes rise to around US$20,000, mid- and low-tier art buyers tend to make their presence felt in the market. If so, the galleries catering to these prices could emerge the winners.

Some say the shift is already underway. “I’ve seen now over the past five years a slow trend towards the gallery market away from the auction market,” said Rudolf of Art Stage Singapore.

Factors other than rising consumer power may also be at play. Even some super-wealthy Chinese have begun migrating to galleries to take advantage of their professional services, such as consulting. Galleries, which buy directly from artists, also provide a degree of protection against fakes, which appear in mainland China’s poorly regulated auction houses with disturbing frequency.

But while few in the industry doubt that China’s middle-class consumers will eventually come into the market, some do question the timing. China’s GDP per head, at around US$8,500, is still far off McAndrew’s US$20,000 benchmark.

Moreover, culture matters at least as much as economics when it comes to art buying. Craig Mattoli, Guangzhou-based CEO of Red Hill Capital and Leona Craig Art gallery, notes that unlike in the US and Europe, art in China has historically been the exclusive preserve of the elite. Middle-class consumers in China may have less cultural inclination for fine art than their peers in the West.

“I came from a poor family [in the US], but we still had framed stuff on the walls,” Mattoli said. “Sure, it was mostly Jesus. We had statues, though not expensive statues.” By contrast, Mattoli noted, bare walls, hardwood floors and Spartan wood furniture often decorate the homes of many of China’s rich – much less the middle classes.

“When I heard people say that the middle class will save the art market – I mean, that may be true,” he said. “But it’s going to take like 50 years or so.”

Playing with the big boys

Until then, Chinese galleries face another threat from within the industry. The country’s booming art market has recently drawn in many big-name Western galleries to Beijing and Hong Kong – companies such as Pace, Gegosian and White Cube – and now even smaller players are in the process of moving into the region.

Their forays present a serious challenge to the larger Chinese galleries, such as Tang Contemporary, Beijing Long March, Beijing Commune and ShanghART (technically headed by a Swiss expatriate, but which Rudolf says is considered “Chinese” in the art world). Western galleries not only come to China with brand names and top-notch talent in spotting and selling art, but also good connections with other collectors and dealers around the world.

A big challenge for Chinese galleries could be in the offing, but nearly everyone in the industry stresses that these are still early days. Rudolf of Art Stage Singapore said that tussles over market share are secondary when the overall industry is still growing for everyone – both Western and Chinese galleries, as well as auction houses. But if the recent downturn begins to truly bite, such tussles could take a much more vicious turn.