Home Agriculture China struggles to protect both forests and farmers 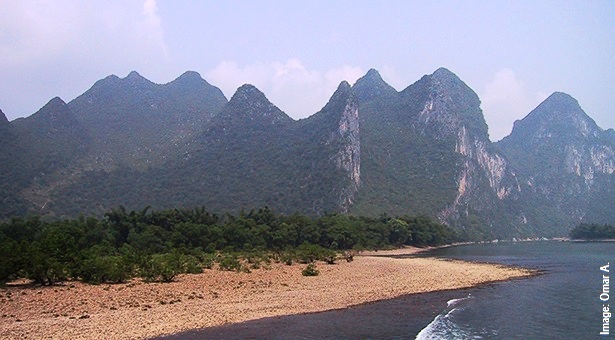 China struggles to protect both forests and farmers

Unlike many of China’s polluted locales, the county of Jinxiu is blessed with blue skies and fresh air. Thanks to government protection and a local national forest park, this part of the peak-pecked and river-rich southwest region of Guangxi has a wealth of mineral resources, biodiversity, plant and insect life and river headwaters. The one way Jinxiu isn’t rich is in income: In 2010 it ranked 65th out of the region’s 75 counties in terms of GDP.

“The forests are bigger and the mountains are more beautiful, but our income is lower,” one local villager told the Economic Times. The county has implemented a “forest eco-compensation” system for over a decade, in which the government pays for income lost in order to protect the local forest. Ecologically the policy succeeded: Forest coverage rose from 82.81% to 84.21% according to official statistics. But the economy has struggled. In 2013, the GDP for Jinxiu County was RMB232.5 million, of which the government received RMB21.6 million. The average net income for villagers was 5019 RMB, one fifth of that seen in the Pearl River Delta, whose lower reaches stem from the rivers originating in Jinxiu.

“Development in China demands every county increase its GDP every year. But for counties with a protected nature zone, that land has to be protected in accordance with the law,” said Zhang Yunbo, co-founder of Protected Area Friendly System, a site that seeks to help such villages turn a profit without turning their environs into tree-stumped wasteland. Zhang said regulations strictly forbidding any human use of certain habitats that can accommodate both the demands of the local ecosystem and human activity ultimately forestall the formation of many environmentally friendly and truly profitable ventures.

“That’s why we need multiple ways to protect the environment,” he said.

Bad to better and worse

Zhang said that cutting off all economic activity can further impoverish those residing in areas where eco-compensation is implemented. That seems to have been the case with Tangxiang, a town in Jinxiu which used to host granite and wood processing factories. The town also benefitted from its abundance of copper resources. Today, there is only one factory within 50 kilometers of the town.

“In the past, cedar wood was the main income for a lot of villages, but we can’t cut them down now,” Liang Baoshan told the Times. “A lot of people have to go out [of town] to find job opportunities. The number of residents in Tangxiang is now less than 4,000, and most of them are elders and children.”

While the county government has attempted to make up for the now-absent factories by planting crops such as anise, tea and edible fungi the local environment hasn’t proven hospitable enough for these ventures to cover the losses, said Qin Daojin, branch secretary for Pingmeng village.

Qin told the Times that cedar needs fifteen years to grow, at which point it provides a profit of 4,800 RMB per acre. On average, each acre used to yield about 320 RMB of profit per year. But under the new protection scheme an acre now only brings 14.75 RMB of annual profit. That means Jinxiu County has lost more than 2 million RMB since the ban on logging went into effect.

Forests from the trees

The forest coverage rate for the entire country was 21.63%, a level the China Forestry Database said qualified China as a low-coverage country. The rate is lower than the global average of 31%, and forest coverage per capita is only ¼ of the global average. While the total land covered had been raised from 19.5 million to 20.8 million hectares over the decade covered by the report, the database estimate for illegally occupied land was around 130,000 hectares. These contradictions point to a policy problem in the way farmers are compensated for the land reclaimed by Nature.

The current compensation system was first introduced to China in 1998, and in 2002 the State Council endorsed subsidizing farmlands’ return to forests in the aptly named “Rules for Returning Farmlands’ Return to Forests”. In the last decade, more than RMB7 trillion was set aside to aid in returning farmland to forests and grasslands. But some conservationists have warned that the current compensation mechanism doesn’t work.

“We need to find out a way to transfer from eco-compensation to a so-called ‘market way’,” said Xie Yan, a conservation and biodiversity researcher with the Chinese Academy of Science and the second co-founder of the Protected Area Friendly System site.

“In China, the principle of compensation is ‘the one who pollutes should recover [their losses], the one who benefits from it should pay for it’,” said Xie. She, along with Zhang, advocates a less stringent land-use scheme than the one now in place in order to foster a more feasible, enforceable conservation scheme in China. Strict rules completely barring nearby residents from using land in any way can end up doing unexpected economic damage, or may go unheeded as people put their needs over those of nature. Indeed, that is what reports suggest is now happening in Jinxiu, where locals have started logging protected trees in spite of the government ban.

Xie and Zhang’s site aims to put farmers who can legally grow sustainable crops in and near protected areas in touch with the organizations and businesses they need to develop a proper supply chain. This helps prevent cases like Jinxiu’s in which goods grown or made in remote towns and villages go unsold thanks to their isolation from the economy at large. Under the Friendly System scheme, 8% of revenue from the crops goes toward protecting the local environment.

There are success stories in China for forest-farm cohabitation, though these are often in areas already better served by existing infrastructure. Zixi County, in Jiangxi province, is also rich in forest resources, with a forest coverage rate of 87.3%. Unlike Jinxi, the average per capita disposable income was RMB23.8 million in 2013. But the Zixi County government regularly refuses environmentally harmful development projects, according to a report in Beijing Review.

In 2013, for example, a local food company planned to invest RMB200 million to build combined farming and processing factories in Zixi, but the local government turned the firm down. In the course of five years, the county government has refused more than 60 industry projects at a cost of more than RMB400 million. Instead, the county is earning money from ecotourism and organic farming. In 2013, ecotourism and organic farms earned RMB246 million for the county. More than 20 agricult
ure parks accounted for more than one thousand acres of coverage.

While this environmentally conscious approach has proven lucrative for Zixi, it may not work as well in environs located in provinces further inland than Jiangxi. More importantly, Zixi isn’t a protected zone with restricted land use—the county entered its current setup voluntarily. Nor is it as isolated as Jinxiu and other towns in China’s craggy southwestern provinces. For these and other locales struggling to balance economics and ecosystems, the path ahead remains as dense with obstacles as the underbrush now reclaiming the county’s fallow farmlands. ♦