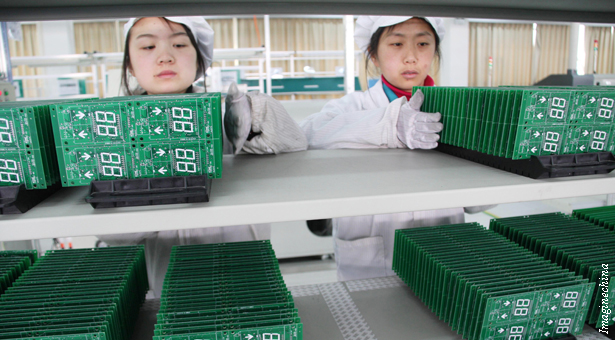 Analysts had been pessimistic about global demand for Chinese goods, projecting a 3.7% gain compared to June of last year, according to a Bloomberg survey. But the actual data was even worse, as shipments recorded a real decline of 3.1%.

But China luckily won’t need to rely on high export growth forever. The country is rapidly upgrading its engines for growth and some signs of that are already in plain sight, according to Michael Spence, a Nobel laureate in economics and a professor at New York University’s Stern School of Business. Spence spoke with China Economic Review in Shanghai in late June.

On some fronts, especially in education, China has forged ahead rapidly, creating many of the conditions necessary to push its manufacturing sector into higher value-added areas, Spence said. In other areas, such as reform in state-owned enterprise, the government has been sluggish to act and has hidden many of the low-return investments of the last decade behind other areas of high growth.

There have been some ripples in China’s economic growth this year. What do you make of slowing GDP and export figures and the country’s attempt to reform its growth model?

Standing back for a minute, there are really two sets of issues, if you listen to the investment community. There’s a set of short-run things – which are normally referred to as imbalances – that I suppose in principle could upset the apple cart if left unattended.

I’ll stick to the second, which is the [long-run] transformation, or evolution, of the growth model. Of course what drives this is not an accident. When [a country] start to rise rapidly above US$3,000 per capita income, things on the tradable side of the economy that were the primary catalysts for growth – those things start to shift around.

On the negative side, one of the things that will happen is that after much of this rather labor-intensive stuff starts shifting around within the country and whatnot, it’s eventually going to go [away]. And that shift is already well under way. It gets replaced under market forces – but with supporting policies – by higher value-added activities.

How much progress has China made toward correcting this imbalance in its economy?

That structural change doesn’t occur overnight, but it’s well under way and the Chinese economy is quite flexible. The rising wages in coastal areas are a double-edged sword. They drive the margins down and force these [labor-intensive industries] out. [The transition up the value chain is driven] by people with higher levels of human capital being attracted into these higher value-added activities.

Can you put your finger on some of the positive changes we’re seeing today?

You see it everywhere. You see it in the mix of the export sector, like in London two days ago, when Huawei announced its own mobile phone. In this way, Huawei will become a global brand, following in the footsteps of the Sonys and the Samsungs and whatnot from many other countries. That’s an important component of it.

From a government point of view basically, there’s much less targeting [of certain industries]. There’s a lot of market, and there’s a very big ongoing investment in human capital and knowledge and technology-based economy.

You can have short-run imbalances and have employment problems that are short-run for college graduates – we’re starting to see this a bit in China now – and you can’t get the timing of all this right. That is crucial. In the course of this, the domestic economy has much greater purchasing power and they purchase much more interesting things.

You mentioned human capital. How efficient has China’s investment into education been during the past 10 years?

There’s a very big expansion. Quality lags a little bit and then catches up. But this is, I would say, an area of strength for China. It’s interesting because China’s early growth model, if you compare it with India, has lots of problems now. India’s infrastructure stinks and some of the elementary education is pretty weak too, but higher education came along early and helped support trade in services, that element of the economy.

If you look at how the government spent money, China maybe in the early days overspent on infrastructure and underspent on this, but early on they figured out that the human capital component is important. China never really underspent on anything. China had literacy rates that were way above for any developing countries, but if you looked at the number of people going to college and stuff – secondary and tertiary education – it was a little low ten years ago at a time when the Chinese economy was evolving really quickly. China has reversed that pattern really rapidly.

Have you seen signs of reform in China’s state-owned enterprise sector?

That is understood, but [Chinese policymakers] haven’t really committed to doing anything about it. A Westerner with that model would say privatize it, but the Chinese are not going to do that. And they’re not going do it for a pretty good reason. They stand back and take a macro view, and they look at the Western economies – particularly they look at the government’s balance sheet. What do they see? They see a lot of sovereign debt and they see even larger non-debt liabilities: pensions, healthcare, anything that people have an entitlement to, using the American term.

And then they look at the assets, and these guys don’t even report the assets because they don’t know what they are. But whatever they are, they’re puny. So they [Chinese policymakers] say, “We’re not going to have a balance sheet like that. We like this balance sheet. We have US$3.5 trillion dollars of reserves. We own 90% of a sector called state-owned enterprises that dominates the fixed-assets part of the economy. And while we may manage these public assets in a different way, we’re going to keep them. They help us invest at high levels. They help us buffer the economy against internal and external shocks.” So on that, I’m kinda on their side.

How can the government better manage these huge firms?

Managing public assets well is a big challenge. The normal pattern is to screw up the economy by managing them the wrong way. So they need competition for the state-owned enterprises; they probably should diversify over time, slowly, the ownership of these assets. This is a debate that is going on right now, and it’s one where vested interests matter because the state-owned enterprises aren’t going to like this and they will argue that the basis of the power of the state and the party resides in part in this very big participation in the economy.