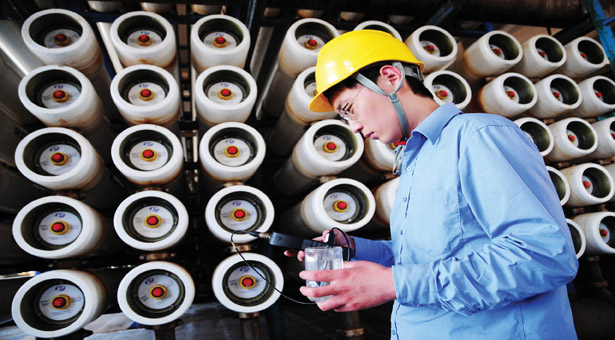 For Beijing’s central planners, 2010 was a year of reckoning. The city’s 20 million residents faced a looming water shortage, and the ambitious project that was expected to help offset it, the South-North Water Diversion (SNWD), was far behind schedule. The project’s eastern route was expected to begin channeling water from the mouth of the Yangtze River in central China to Beijing by 2010, but excessive pollution and other complications had pushed back that date until at least 2014.

Beijing’s economy and population have exploded in previous decades, causing per-person water resources to shrink from about 1,000 cubic meters in 1949 to around 100 cubic meters today, said Ma Jun, a Chinese environmentalist who directs the Institute of Public & Environmental Affairs, a non-profit group. “That’s a dangerously low level,” Ma said.

With the SNWD project floundering, officials shifted their focus to desalination, a process that turns sea water into fresh water by removing salts and solids. The central government released ambitious targets under the 12th Five-Year Plan to roughly quadruple its desalination capacity by 2015. Since then, new plants have sprung up in the coastal northeastern cities of Tianjin, Dalian and Qingdao.

With sea water accounting for 98% of the earth’s water, desalination may seem like a tempting solution to China’s water shortage. The technique already provides a much-needed water source in areas with severe fresh water shortages, such as islands, aircraft carriers and the arid cities of the Middle East. Yet there are reasons to be cautious. Because desalination is so energy intensive, it remains uneconomical for widespread use – especially in a developing country like China.

China’s water shortage is especially acute in the vast northern plain, where many of the country’s factories and farms are located. Water resources here are less than one-quarter of those in the south, and one-eleventh of the world average, according to research firm IHS Global Insight. The situation will only worsen as China’s economy develops and lifestyles grow more lavish.

The country’s leaders clearly understand the economic and social threat this water shortage poses. “The fact is that water shortages are a big constraint on the development of the city and the country,” said Oon Jin Teik, group executive vice president and China CEO of Hyflux, a Singaporean desalination company.

Chinese companies have already embarked on a series of colossal infrastructure projects to help meet demand, changing the face of China’s countryside with dams, reservoirs and water diversions. Now, with the help of foreign contractors such as Hyflux, ERI of the US and Aqualyng of Norway, Chinese companies are building some of the world’s largest desalination plants.

The State Investment & Development Corporation has constructed the Beijing facility, China’s largest combination desalination and coal-fired power plant, near Tianjin, with the help of Israel’s IDE Technologies. Nearby, Hyflux has helped to construct China’s largest reverse osmosis plant, the Tianjin Dagang Xinquan plant. And Abengoa Water of Spain signed an agreement last June to construct an even larger desalination facility on Changxing Island, off the coast of Dalian in the Bohai Sea.

There are two main types of desalination plants. In thermal plants, seawater is heated to create water vapor and then condensed into fresh water, mimicking the natural water cycle. This energy-intensive process, which can also use the heat that is a byproduct of power production, is more popular in areas where energy is plentiful and cheap, such as the Middle East. The other main type of plant employs membranes to filter out salt and solids from the water through reverse osmosis. Membranes use less energy but are more difficult to make.

China ranked sixth globally in terms of desalination capacity at the end of 2011, after Saudi Arabia, the US, the United Arab Emirates and Kuwait, according to data from the Global Water Intelligence. But it has plans to roughly quadruple this capacity to 2.2-2.6 million cubic meters of seawater per day by 2015, likely helping China to advance significantly in global rankings.

This is a bid not only to alleviate water shortages but also to build yet another export industry for clean tech equipment. About 40 Chinese institutions are involved in research and development in desalination, and roughly 600 companies manufacture equipment, according to state media. To support the fledgling industry, China’s cabinet has set a goal for 70% of all desalination equipment used in China to be sourced locally by 2015.

But some analysts predict that Chinese component makers will continue to lag behind foreign competitors for years to come. Domestic manufacturers can produce many of the components used in the desalinating process but generally still lack the ability to manufacture high-quality membranes.

“Our technology is 10 years behind that of advanced countries, especially in membrane technology,” said Wang Shichang, head of the desalination research center at Tianjin University. “The government is trying hard to improve this technology, so maybe in five years we will have mostly developed our [own] equipment.”

No such thing as a free drink

For the desalination industry, price may be an even bigger obstacle than technology. Desalinated water costs significantly more than traditional freshwater sources, largely because of the energy required. In Tianjin, the price of desalinated water is about RMB5-7 (US$0.80-1.10) per cubic meter, compared with RMB3.9 per cubic meter for tap water, said Wang of Tianjin University.

There are even more expensive ways to get water, of course, some of which are being pursued enthusiastically in China. While there is no official estimate, analysts project that piping water north through the SNWD may cost twice as much or more as desalinating it.

But while desalination may be affordable next to the SNWD, that is not saying much. In some Chinese facilities, the cost of producing desalinated water is two to four times its selling price. “Desalinated water at the moment is significantly more expensive than conventional sources,” said Olivia Jensen, Asia editor of Global Water Intelligence. “The economic case for desalinated water is not very strong.”

This could change in the years to come, as water’s increasing scarcity drives the price of conventional water up and evolving membrane technology pushes the price of desalination down. Yet desalination is likely to remain an energy-intensive process – meaning it is unlikely to be a panacea for a resource-poor country such as China.

This is especially true in a world where the cost of water and energy are increasingly linked, said Bill Dodson, an energy analyst and the author of the forthcoming book “China Fast Forward: The Technologies, Green Industries and Innovations Driving the Mainland’s Future.” As water becomes scarcer, its energy intensity increases. More energy is necessary to pump water up from deep wells, transfer it from far away, or filter and desalinate it. Yet a huge amount of water is in turn required to produce that energy, since nearly all energy production methods are water-intensive. Mining coal, “fracking” for shale gas, making solar cells and cooling nuclear reactors all require substantial amounts of water, said Dodson.

Studies indicate that the prices of various resources, from energy and water to agricultural and industrial commodities, are now more closely linked than at any point over the past century. Energy accounts for 15-30% of the cost of crop production, 25-40% of the cost of steel and 50-75% of the cost of fresh water produced through desalination, according to a 2011 report by McKinsey Global Institute.

These linkages suggest other problems beyond price. The electricity that feeds the d
esalination process in northeastern China comes mostly from coal, making desalination a source of pollution and a contributor to global climate change. Environmentalists are also concerned about how plants will deposit the brine that accumulates during the process: Discharges around the plant can raise the salinity of the water, killing off ocean ecosystems.

Finally, desalinated water may be re-contaminated by China’s aging network of water pipes. “We know from the South-North Water Diversion project that Tianjin won’t accept the water that’s been shipped up because it’s so polluted,” Dodson said. “Even once you’ve desalinated this water and you want to ship it a far distance, how do you keep it clean?”

The economics of desalination are such that it remains practical only for some consumers in some parts of China – for now, primarily thirsty industries such as steel mills, chemical factories and power plants in the dry coastal cities like Tianjin, Dalian and Qingdao. “The fundamentals make more sense on the northern coast, where industrial growth is going to continue at a very rapid pace,” said Jensen of the Global Water Intelligence.

Desalination is clearly an exciting technology, and it may have big implications for China’s future. Yet central and local governments should treat desalination as just one piece of a holistic strategy for managing water and energy, said Jin Teik of Hyflux. “At the end of the day, we don’t go into every province and push desalination. We look at the system, and we try to understand the local dynamic, before we design the water solution.” He pointed to the combination of water recycling and desalination measures that have been adopted in Singapore, which has a severe fresh water shortage.

Desalination is very viable in growth areas like the northeast, said Jin Teik. But if the shortage of water is inland, the government may be better off exploring opportunities for wastewater recycling, which now produces much of Singapore’s fresh water. “This is something that’s very big for us, but it’s not very hot yet in China. There are plenty of wastewater treatment plants in every province, but very few take that next step to recycle wastewater,” Jin Teik said.

Besides wastewater treatment and recycling, China still has much to gain by conserving water, for example by improving irrigation systems and reforming water prices. About 70% of China’s water goes to agriculture, and more than half of that is lost through leaky irrigation systems. Much of this happens on the northern plain, where winter wheat and corn are grown. Conserving these lost gallons would be far cheaper and better for the Chinese economy and the environment than manufacturing them through desalination.

For now, desalinated water is still too expensive for agricultural or municipal use, even in coastal cities. Piping the water inland (and uphill) to Beijing is also prohibitively expensive. With Beijing running out of other water options, however, that may not deter the parched capital. “Desalination is almost like you have no choice, you have no other source of water,” said Jin Teik of Hyflux. “It could be the least preferred option, but it’s a viable option now.”