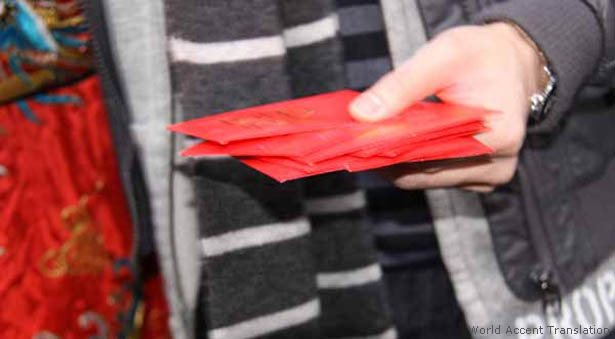 How to win friends and pass bribes at Chinese New Year's

Friday is the first day of the Chinese New Year and it’s time for people across the country to hand out red envelopes. In a longstanding holiday custom, these hongbao are stuffed with cash when they reach their recipients, the majority of whom are children.

Another tradition dictates that people of power and influence will also be showered in red envelopes. Businesspeople looking to strike long-lasting deals in the new year may furnish partners and even officials – anyone with decision-making power – with gifts in the run up to the country’s most important festival. Hongbao are good for currying favor with bosses too. A lowly salary man can do wonders for his career by presenting a gift addressed to a manager’s or supervisor’s son.

This hearty tradition of graft has come under attack as of late. One of Communist Party boss Xi Jinping’s first moves after taking power was to wage war on corruption, lest his cohort lose legitimacy. The ensuing crackdown has made illicit cash endowments increasingly dangerous.

This has made pre-paid gift cards all the more popular.

The market is bustling. Since May of 2011, the government has issued more than 250 licenses to third-party payment providers. A few of these are used by companies such as Alibaba to process online payments but the vast majority are for companies that issue pre-paid cards. These are common in the West, where giving cash as a present is not a commonly accepted practice. Many retailers issue gift cards with a monetary value that can only be spent at their stores.

In China, the cards are sold at a significant discount to their face value, often 20%. And instead of ending up in birthday cards, their untraceable nature makes them a common means of passing bribes or embezzling company funds. The simplicity of the process is what makes it so popular.

At the end of the calendar year, some businesses in China buy up large quantities of pre-paid cards. It’s a time when many departments in companies are looking to spend the remaining funds in their budget. On the books, these purchases are written off as expenses for employees or bonuses. The paper trail ends here. At present, a company can buy pre-paid cards without registering the cards under its name. The cards become an untraceable monetary unit.

Sticking it into a red envelope and passing it to a local official or a board member at a powerful firm is by far the easiest and most straightforward method of using a pre-paid card for graft. To tax officials or inspectors from China’s corruption watchdog, the cards were handed out to employees as bonuses. When the real recipient cashes in the card, nothing ties the gift to the firm that gave it away.

This isn’t the only way the cards are used. In fact, corrupt company officials might be more interested in the short-term monetary gain the cards offer than forging long-term business connections.

A department head, for example, could buy RMB100,000 in pre-paid cards for RMB80,000. According to company records, those cards went to employees as an end-of-the-year bonus. In reality, that person goes on to sell those cards for RMB60,000 then pockets the money with few risks.

Somewhat of a black market has developed around pre-paid cards. One industry insider told China Economic Review that companies that issue the cards will issue them to an individual and then buy them back for a lower price. The individual will split the cash with the card issuer. Many of the cards are eventually sold on online marketplaces like Taobao.

Sometimes an issuer might make cards without a real product behind it. “Imagine if the cards said they were for haircuts. No one knows whether or not there is really a product that backs up the cards,” the insider said.

Slowly, this practice is being challenged. The government is targeting the illicit use of pre-paid cards and has already made some headway in that direction. The denomination has been limited, and companies can no longer issue RMB5,000 cards as they could in the past, increasing the work required in order to use them for corruption or to make illegal gains.

The real deal-breaker will come when the central government fully imposes a “real name” system for the cards, forcing anyone looking to purchase a bundle to enter their name into a registry that the authorities can check. That effort is underway and, if successful, would make the cards traceable.

Until that law is sufficiently enforced, however, hongbao and the pre-paid cards they contain will still paint smiles across the faces of crooked bosses and officials come Chinese New Year.